The 5 best rotary effects for every budget

Electronic simulations of the legendary Leslie Effect are often said to be not realistic enough. Are you kidding me? Are you serious when you say that! The market today offers a selection of special floor effect units for keyboardists and guitarists, which are specifically concerned with emulating the sound of the famous Rotor cabinet, and that to perfection.

Anyone who loves the Hammond organ knows the sound. But it is not the organ alone that creates this unmistakable sound between cathedral-like beats and shimmering tremolo. This sound is generated by the Leslie cabinet connected to the organ, a special two-channel loudspeaker box from the 1940s that uses mechanical sound deflectors that are located in front of the loudspeakers and against each other in the 360-degree plane to reproduce the high frequencies and the bass component rotate.

This creates a special one modulation the pitch, by taking advantage of the Doppler effectwhich, depending on the speed of rotation, is a beat or a special vibrato. The organ cabinet invented by the American Don Leslie has its sound deflectors rotate at two speeds: CHORALE (approx. 48 RPM) for a slow beat and TREMOLO (approx. 380 RPM). There is no rotation in the STOP position.

In addition to the impressive sound that is offered during the rotation, the effects known as 'Rise' and 'Fall' are a typical and fascinating feature of the mechanical sound deflection. The difference in weight between the two sound deflectors for the bass range (drum or rotor) and the high frequency range (horn) creates interesting auditory impressions when changing speeds, as the bass rotor accelerates and decelerates more slowly than the high frequency horn. You can see the "rise" and "fall" effects during the first 23 seconds in this video:

Not just for the organ!

In addition to organists, guitarists also use the massive slingshot, the sound of which also lets the guitar sound in new dimensions. As recently as the 1970s, few manufacturers tried to electronically simulate the Leslie effect, which was only partially successful with analog technology. Technical progress and digital technology prepared the springboard for intensive further developments, which can now be seen on the software and hardware side.

In addition to perfect Hammond clones including Leslie simulation, there are also stand-alone floor effect devices that are reduced in size, weight and price and have dedicated themselves to the sound of the old Leslie box. That makes it equally interesting for keyboardists and guitarists to take the famous sound with them on stage or into the studio.

So that you can get an impression of what is available on the market, we are showing you the five best 'Rotary Speaker' effects pedals in the price range from just under 400 to less than 40 euros.

It's no secret that real Leslies are just as hard to come by as they are to haul, but that the sound they create remains unbroken. The list of attempts to imitate the rotary loudspeaker invented by Donald Leslie in 1940 is correspondingly diverse, as authentically as possible, but more back-friendly and much more comfortable to use.

With the Ventilator II, the German manufacturer Neo Instruments has set the bar for electronic Leslie simulations even higher after the “Ventilator”, and you can hear the pocket-sized Leslie. Based on the simulation of a Leslie 122 rotor cabinet, the Ventilator II uses complex modeling algorithms to emulate a rotor cabinet that, as is usual in practice, is picked up with three microphones - one for the bass rotor and two for the tweeter rotor. Both rotation units can be adjusted independently of one another. In addition to a drive section for an authentic overdrive effect, the Ventilator II also offers control of rotor speed and mix via an expression pedal and can be operated from an external remote pedal.

The mini Vent II is even smaller in size and cheaper than the Ventilator II. The sound of the mini Vent II is on the same level as its big brother, but the settings are slimmed down. It lacks the potentiometers for parameter adjustment and the physical stop button for the rotor stop control. However, this can be called up by pressing the bypass and the slow / fast button at the same time. So that the sound can be set individually, the mini Vent II is brought into the programming area by a special key combination when it is switched on. Here all settings can be made and saved within an edit routine. If you get used to the type of programming of the mini Vent II, you can save around 130 euros compared to the Ventilator II. 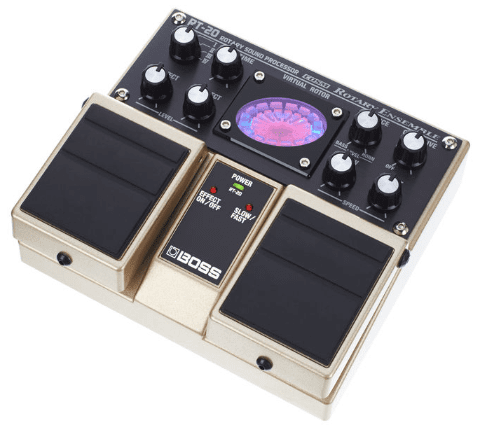 That too Boss RT-20 floor effect pedal has set itself the task of making the sound of the mighty Leslie-Kabinette accessible to keyboardists and guitarists in a handy format. With the help of the bosses' own COSM technology represents the Boss RT 20 a further development of the Leslie simulation from the Roland organs VK-7, VK-77 and VK-8, which is also an emulation of the proven 122 Leslie. The RT-20's equipment also includes an overdrive to imitate the warm distortion of the Leslie cabinet, various setting options for tuning the simulated rotors and a connection for an optional expression pedal for manual speed control. The direct and effect components can also be adjusted separately. The 'Virtual Rotor' located in the center also gives the player a colorful representation of the sound. Thanks to the robust design, the Boss RT-20 effects pedal is prepared for tough stage use.

With the ‘Lester’ model, the American manufacturer Electro Harmonix offers a stomp box for creating the famous Leslie effect. The Lester effects pedal is in two versions available: 'K' for use with keyboards and ,G' for use with the electric guitar. Both differ in the input impedance and the frequency spectrum in which the controlling instrument types are located. The control panel of the pedal is kept very simple and offers setting options for the two rotor speeds, the overdrive and the balance between the two rotors. These, in turn, are standard settings that the pedals described above also offer. Its special features include a tube-emulated overdrive and a warm-sounding rotary sound. Your own ear should decide whether you as a guitarist choose the 'G' or the 'K' version. 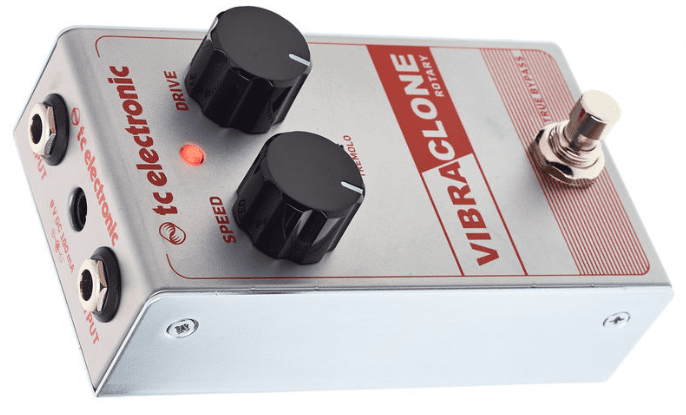 The Vibraclone Rotary from the Danish manufacturer TC Electronic is the cheapest solution to get the sound of rotating loudspeakers. As a clone of the Fender Vibratone speaker cabinet manufactured in 1968, the 'Vibraclone' impressively simulates the sound of the short-lived original. In contrast to a Leslie cabinet, the original Fender Vibratone was only equipped with a single rotating drum in front of the loudspeaker and was specially designed for guitar use. Equipped with two potentiometers for the speed control of the rotor and a warm drive, the Vibraclone pedal offers a toggle switch for switching between the chorale or tremolo settings as well as a bypass button.

While all of the other effects pedals mentioned are suitable for use with organ and guitar, the Vibraclone Rotary Pedal, as an inexpensive alternative, is intended for guitar use and fulfills this purpose extremely well.

What do you think of the Leslie Effect? Is it outdated, not modern enough for your ears, or as awesome as ever? Which pedal do you personally prefer and why? Did you miss something here? Let us know in the comments 👇

As the electric guitarist of an alternative rock band, Dominic made several clubs in German-speaking countries unsafe (very few of them had to do afterwards). He is still regularly on stage with his unplugged band.
<?