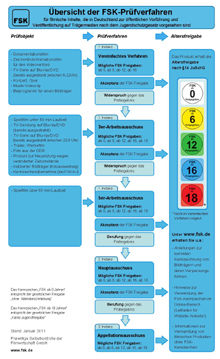 The principles of the FSK and the Youth Protection Act (JuSchG) serve as the basis for testing films and other carrier media. The approvals for five age classifications are made free of instructions, in transparent and plural testing procedures. There is no legal obligation to submit, but in fact all cinema films shown in Germany have to pass an FSK test beforehand. This happens on application, the FSK cannot act of its own accord.

The committees work non-publicly. Up to five committees examine in parallel every day. The respective age rating and, in the case of feature films, a short version of the reason for the release are published from the test result. If there is a "serious risk to young people", the FSK is not allowed to issue an age rating, the test result is then "No marking". For more information, see Age Levels & FSK Rating.

Click your way through the FSK auditors. Explore interactively which path the various test objects take at the FSK to final approval: Interactive test procedures

Committees and proceedings
The FSK has a working committee, the main committee as the appeal body and the appeal committee for the examination. Depending on the test object and procedure, the committees work in different compositions. Here is an overview:

Working Committee
The working committee for examinations for the age rating of feature films (from 60 minutes in length) consists of five examiners who are appointed by the public sector and the FSK. The public sector provides three representatives: the permanent representative of the Supreme State Youth Authorities as chairperson and, on a rotating basis, a youth expert from one of the 16 federal states and another representative. The FSK names two representatives who may not be employed in a company in the branch. Decisions are made with a simple majority; abstention is not possible. Approvals for young people can also be issued with conditions.

Short feature films (less than 60 minutes), TV series already broadcast on DVD and Blu-ray (BD), films from the GDR, products to be re-examined due to changed circumstances, indexed image carriers for a theatrical release, trailers and Checked advertising films and license plate transfers. This three-person working committee consists of one delegate from the public sector and one from the film and video industry, as well as the permanent representative of the highest regional youth authorities.

A member from the public sector and the FSK decide on the release for silent holidays. 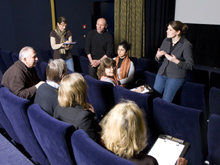 The check for release for silent holidays is carried out by five members: the chairman and two members each appointed by the public authorities and the FSK.

Simplified process
The simplified test procedure applies to documentaries, music videos, TV series on DVD that were broadcast between 6 a.m. and 10 p.m. and are no longer than 60 minutes, cartoons and supplementary programs for image carriers. It is carried out by the permanent representative of the Supreme State Youth Authorities.