Such a Nissan Altima actually embodies the automotive boring par excellence. It belongs to the middle class and comes from the category "good family sedan with notchback". Its four-cylinder engines are charged by a turbo or not, depending on the model variant, and produce a maximum of 251 hp. Only those who buy the top model receive all-wheel drive. Normally the Nissan Altima is a front-wheel drive.

After the philistine has mutated into "Altimaniac" nothing remains normal. This is the name of the new toy from professional drifter Chris Forsberg, who because of his job cannot do anything with front-wheel drive. The three-time Formula Drift world champion, on the social networks as @ chrisforsberg64 and loyal to the Nissan brand for 18 years, is pushing the limits of technology and creativity - or does he even go beyond that?

The development was purely digital

The Altimaniac actually began its life as a completely normal front-wheel drive Altima from model year 2021. But it had to get naked quickly: Forsberg's team first completely dismantled the four-door and then scanned every square centimeter of the body and every single part in 3D. This resulted in a completely digital model of the car, on the basis of which the rest of the development took place. "This drift car was designed entirely on the computer," says Chris Forsberg, whose racing team then turned the Atimaniac into reality together with the chassis development company Tekk Consulting. 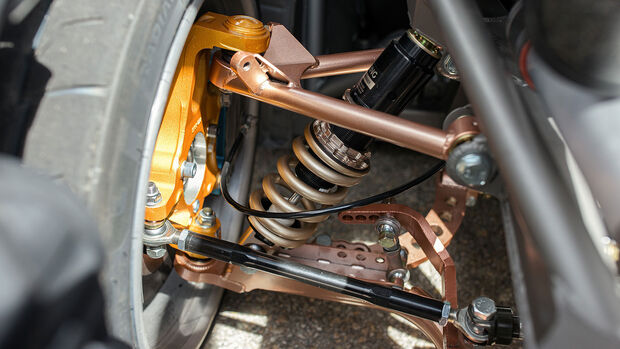 Larry Chen
The fully adjustable coilover kit from BC Racing and the custom-made wishbones.

Everyone involved had a decisive advantage in this project: The Altimaniac should not compete in official drift competitions. So the developers did not have to obey any regulations, but were able to design the tubular frame, the suspension points or the safety systems in a way that made the most sense from their point of view. The chassis, for example, was specially developed for the Altimaniac. A fully adjustable coilover kit from BC Racing serves as the basis, to which the particularly light Rotiform wheels are connected via specially made wishbones.

Wide body from the 3D printer

In order to accommodate this adequately, a significantly wider body had to be found. That was all right for Forsberg, after all, he envisioned a widebody look for the Altimaniac in the style of the Japanese Super GT racing car. Tekk Consulting produces the necessary parts in a 3D printer. The advantage of this approach: Should one of the fenders, lips, spoilers or splinters need to be replaced, the required part can be easily reproduced. The doors and the roof are left over from the series Altima.

When it comes to the engine, the makers set the bar pretty high: it should be at least 2,028 hp (or a smooth 2,000 American bhp). It comes as no surprise that this performance cannot be teased out of an Altima four-cylinder. The VR38 twin turbo V6 of the Nissan GT-R offers significantly more potential in this regard. T1 Race Development took care of its further development. Neither the engine specialist nor Chris Forsberg reveal exactly in what way.

The cooling has been optimized based on the model of the GT3 racing car based on GT-R-Nismo. The sequential RTS 6XD gearbox not only changes gears at lightning speed, but according to Forsberg is also characterized by its "bulletproof" robustness. In addition, there is an exhaust system that pierces the bonnet and releases the combustion residues upwards to the side. 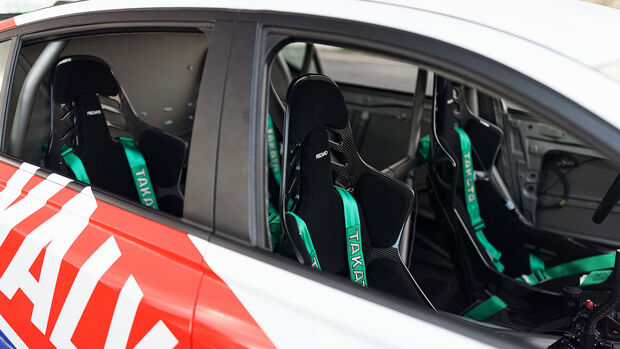 Larry Chen
Here is a special feature of the Altimaniac: It is a four-seater.

Inside, there is another special feature of the Altimaniac: it has four carbon bucket seats from Recaro. Chris Forsberg can make three passengers happy on his demo tours. A specially designed roll cage, on which an extra display is attached to the rear, winds its way around the crew. In this way, one of the chauffeurs can see exactly which gear is currently engaged or what speed level the pilot is currently driving the engine.

A different color scheme from every perspective

The fact that the drift car has a different color from every perspective is of course intentional: The paintwork has been optimized for 360-degree drone shots - above all with the aim of presenting the main sponsor, a mineral oil supplier, in the best possible way. This should happen primarily as part of the "Gridlife" series of events, which brings together music and motorsport in the form of a festival. The next event will take place on the weekend of April 17th and 18th at NCM Motorsports Park, located in the Corvette home of Bowling Green, Kentucky.

What do you think of the Altimaniac based on the Nissan Altima?
A great car - I really want to go with you!
A mega embarrassment - something like that fell out of time!

Sometimes it takes a bit of madness to push the boundaries of what is possible. However, it took some such craziness to turn the brave Nissan Altima into a hardcore drift car. But the enormous effort seems to have been worth it. As the videos already show, the Altimaniac goes and sounds like hell!