Genius is based on IQ alone 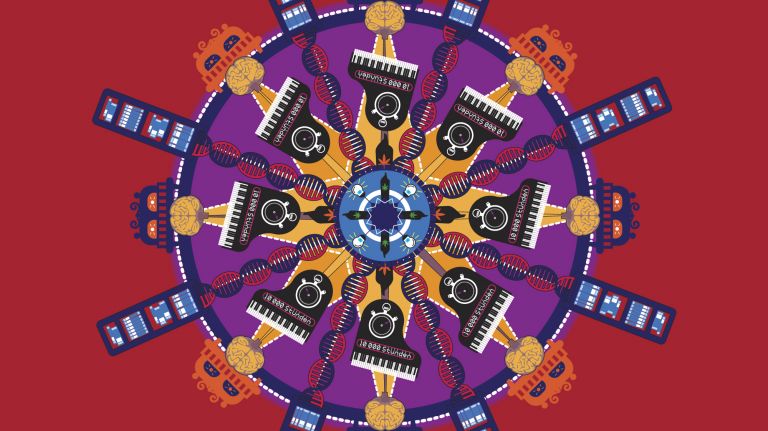 The question - genes or the environment - was yesterday: in order to develop an outstanding talent for art, sport or science, a lot has to come together. But what?

Does “genius” even exist?

We like to imagine geniuses like Einstein or Mozart, how they draw completely from themselves in a quiet little room and single-handedly “give birth” to the theory of relativity or the Jupiter symphony. That's a pretty modern idea. Until the age of the Enlightenment, genius was nothing that was located in an individual as his creative force. Rather, genius was an external power of a divine nature that every human being had from birth. Above all, the idea of ​​creation out of nothing can be relegated to the realm of myths today. For example, the Swiss-Italian engineer Michele Angelo Besso is considered to be the most influential discussion partner of Einstein in the development of his special theory of relativity. Einstein himself wrote that "he owed him many valuable suggestions". Geniuses need partners too.

The more stars, the more talent, the more success. A bill like a safe bank. Unfortunately, however, it doesn't quite work out if you look at the results of a 2014 study by Roderick Swaab from the European business school INSEAD and his colleagues. Take football, for example: the success of a team does indeed reflect the number of top players - but only up to a certain point: if more than 60 percent of a team were superstars, this was at the expense of team performance. The reason could be in the teamwork itself. Especially in football, the players all have to pull together, but too many stars in their own ranks seem to hinder teamwork. However, the researchers did not find this effect in sports such as baseball, which is more based on individual performance.

In 2016, the Uzbek chess player Timur Gareyev set a new world record in blind simultaneous chess when he played against 48 opponents simultaneously and blindfolded. In this way he had 35 wins and 7 draws, he lost 6 games. Neuroscientist Jesse Rissman from the University of California at Los Angeles examined it in his laboratory to find out how the blind chess master can remember dozens of chessboards and react to each new move. According to neurophysiological tests, Gareyev does not have an above-average working memory, and his spatial perception and other memory functions are also normal; MRI recordings showed, however: In Gareyev's brain, various networks such as the visual network, the control and the attention network are particularly closely linked. This way, the chess master can control his thoughts more easily and switch back and forth between the various networks better, Rissman suspects.

The Korean Kim Ung-yong (IQ 210) was a real early developer: he was able to speak at just six months. When he was three, he was able to converse in Korean, Japanese, German and English and solve complex arithmetic problems. At the tender age of eight he began studying at NASA. As a young adult he had already published various books, including numerous treatises on hydraulics. Today he repeatedly emphasizes in interviews that it is much more important to enjoy the normal things in life such as friendships than to be special.

2998 solutions ended up in Thomas Edison's wastebasket while trying to tinker with a functioning electric light. Another missed the basket more than 9,000 times in point games alone in the course of his career: basketball star Michael Jordan. Even two recognized geniuses, one of the most innovative inventors in history, the other perhaps the best basketball player of all time, do not succeed in everything - and especially not everything right away. This raises the question of what makes brilliant people and their achievements. Is it really talent or, above all, hard work?

For more than two decades, a large number has haunted not only specialist literature, but also popular culture: the path on the way to a real master of a subject, be it music, chess or sports, should be a rocky one, paved with at least 10,000 Hours of intense exercise. The good news: In principle, innate talent is a minor matter. But let's go a little farther first. When asked what makes great minds, the pendulum has been swinging back and forth between two extreme answers for 150 years: It is of course the systems, some claim. No, by no means, it's the environment, counter the others.

As an example, we have Francis Galton (1822-1911), the founder of behavioral genetics, on the one hand. In the 19th century he was of the opinion that experts are “born”. Although "training is necessary to achieve a high level of achievement, innate skills limit the ultimate level of achievement that a person can achieve." Galton had noticed while sifting through family trees that excellence in science, in art , Find music and sport in families - and to a much greater extent than chance would suggest. Galton himself came from such a family. Not only did he excel himself in many areas such as geography or meteorology. He was also the cousin of Charles Darwin, the founder of the theory of evolution. And both had Erasmus Darwin as a grandfather, one of the leading intellectuals of the 18th century.

The opposite position took the American psychologist John B. Watson (1878-1958), the founder of behaviorism, with which the pendulum swung in the other direction at the beginning of the 20th century. Watson believed that experts were made. "Practicing more intensely than others ... is probably the most sensible explanation we have today, not only for success in every respect, but even for ingenuity." In 1993, researchers led by the psychologist K. Anders Ericsson from, completely in the spirit of Watson Florida State University. They asked professional musicians of different levels of ability about their practice hours and came to the conclusion that the performance of experts in a particular field can be explained mainly by the accumulated hours of targeted practice and not by innate talent. The 10,000-hour rule mentioned at the beginning was born.

With the book “Überflieger” by the American author Malcom Gladwell, this rule became a well-known formula in popular culture. And there seems to be something to it: Whether Mozart, Beethoven or the Beatles - all of them achieved their great works after completing five-digit hours of practice. “Ericsson originally assumed that people were like a blank slate,” says psychologist Tanja Gabriele Baudson from TU Dortmund. And in principle anyone can become an expert through 10,000 hours of practice. “However, this extreme view that talent does not play a role is difficult to maintain.

In fact, the rather one-sided view has been exposed to strong headwinds in recent years, for example through a meta-analysis by researchers working with psychologist Brooke Macnamara from Princeton University: In their evaluation of various studies, targeted practice was only able to identify a rather modest part of the differences explain in performance in many areas such as sports, games (chess) or music. Other important factors, according to Macnamara and her colleagues, could be when you started practicing and what intelligence you have. Intelligence is hereditary to a considerable extent and can predict the level of performance in many areas such as music, chess or the sciences.

A long-term study that began more than 45 years ago and is now led by researchers at Vanderbilt University points in this direction. It accompanies around 5000 intellectually gifted, precocious children. And it leaves little doubt that expertise has to do in large part with talent. Many of today's innovators in science, technology, and culture used to be mathematically or linguistically gifted children. The importance of intelligence is also confirmed by Klaus Urban, head of the Institute for Applied Gifted Diagnostics and Talent Promotion Hanover. "In all performance areas, be they more intellectually oriented, but also in the talent area, in sports, music or art, intelligence always plays a certain role," says the educational psychologist and professor emeritus at the University of Hanover. “After all, I have to record, among other things, what has already been worked out and achieved in the respective area, for example in art.” And intelligence is also required to further develop what has been achieved so far in a domain.

Another study puts this assessment into perspective: “Does chess need intelligence?” Asked Merim Bilalic from Northumbria University. In his long-term observation, he found that it was not the children with the very highest IQs who later turned out to be the best chess players. It is assumed that the “high-flyers” had too many other hobbies and did not put as much intensive practice time in check as their peers with slightly lower IQ values.

In addition, the intelligence recorded with conventional intelligence tests has its limits from a certain point. Those who are particularly smart after conventional IQ tests don't have to be creative. "But if I want to achieve something extraordinary in art or music, for example, I have to bring a good dose of creativity with me," emphasizes Klaus Urban. “This is the only way I can go beyond conventional thinking - otherwise I would never be able to achieve anything new, tread new paths.” However, according to Urban, creativity is only here as divergent thinking (https://www.dasgehirn.info / perceive / beauty / in-the-head-of-the-artist-6707) and to record quantitatively how many ideas a person has about what one could do with a brick. "Creativity also includes other aspects such as the will to create, focus, willingness to make efforts and, above all, motivation that I have to bring with me in order to be creative." Creativity research shows: Even the inspirations that seem to appear out of nowhere, sometimes literally in my sleep famous Eureka moments have a long lead time. If it is to be really meaningful inspiration, you have to deal systematically with the area beforehand and have enough expertise.

In many cases, brilliant achievements are based on a whole network of prerequisites: a certain amount of cognitive skills, character traits such as motivation and curiosity, environmental factors such as the right support and a lot of practice. The eternal controversy - environment or plant - is actually out of date today. "It makes no sense to ask what percentage of the potential can be traced back to the genes," says Tanja Gabriele Baudson. “The reason: plants and the environment interact strongly with one another.” Klaus Urban sees it similarly. As with all skills, talent and the environment play together right from the start. "It is essential whether a certain ability is recognized and encouraged in a child, whether the person concerned practices, so that later high performance results."

The example of creative people shows once again how closely the system and the environment interact. They often come from a stimulating home that provides them with an abundance of books, museum visits and musical enjoyment. A clear example of the influence of the environment, one might think. But far from it. Because the offspring sometimes creates the environment for themselves, which their genetically determined skills and interests require. It is often the gifted little ones who urge their parents to buy them certain books, to allow them to enjoy music lessons or to pay them tennis lessons. The later famous mathematician and philosopher Blaise Pascal (1623-1662) secretly devoted himself to the study of mathematics as a child, even when his father hid all books on the subject because he believed his son was neglecting his classical studies. Without further ado, the young Pascal created large parts of the already existing Euclidean mathematics on his own.