Bioluminescence occurs in our body

The bioluminescence of bacteria occurs mainly in bacteria that live in the salt water of the oceans. The most important bacterium is called Aliivibrio fischeri (formerly Photibacterium fischeri or Vibrio fischeri). It is very easy to observe and the culture is also not very complex. If you pour half salted water over a salted herring and leave it to stand in the refrigerator for a few days, you can observe the formation of bacterial colonies in the dark. A detailed description of the experiment and the culture instructions can be found on the website of the microbiological garden of the Institute for Chemistry and Biology of the Sea at the University of Oldenburg.

To obtain pure cultures, toothpicks are used to inoculate luminous dots from the fish on an agar medium with the following composition: tryptone (10g), yeast extract (5g), glycerine (3 ml), table salt (20 g), magnesium sulfate (1 g), Dissolve Tris buffer (6 g), agar (20 g) in 1 liter of water, adjust the pH to 7.5 and autoclave for 30 min at 121 ° C. The bioluminescence starts after a few days and is clearly visible for about two to three days at full intensity. There is one more important feature to consider: bacteria communicate with each other. A single bacterium does not glow, but it secretes a messenger substance in small quantities, the autoinducer AHL. When a certain bacterial density is reached (1010 until 1011 Cells / ml), then the concentration of autoinducer in the environment is so great that some of it is absorbed again. This in turn activates a gene, which in turn produces or activates the enzymes responsible for bioluminescence. The bioluminescence does not start with small intensities and increases slowly, it starts suddenly and without notice. This process is known as quorum sensing. 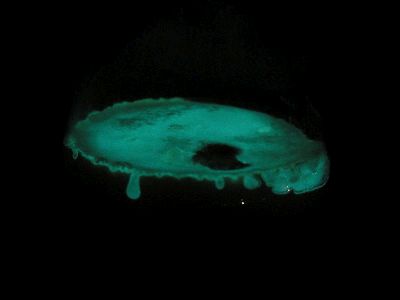 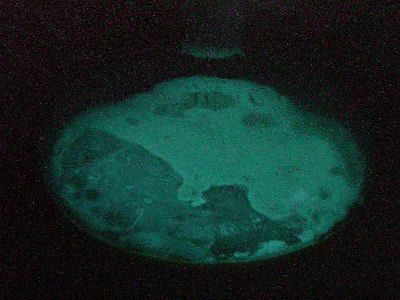 Ms. Kerstin Voigt from the Institute for Microbiology at FSU Jena kindly provided me with a culture flask with this bacterial culture. The light can be seen very well in a darkened lecture hall. The maximum of the luminosity is reached after about 2 days and then decreases relatively quickly.

All glowing bacteria and possibly also some fungi have a biochemically similar lighting system. The emission of light is due to the presence of reduction equivalents (NAD (P) H2), an aldehyde and oxygen.

The above scheme explains almost nothing, of course. The important questions about chemistry remain unanswered. Which molecule is created in the excited state and represents the actual emitter? With which chemical reaction is the excited state reached? Which reaction is actually catalyzed by the luciferase? What role does oxygen play? Does it react directly or is it first reduced to hydrogen peroxide or one of its derivatives? On the part of chemistry there are now certain ideas about the mechanism of the reaction. The starting material is the FMNH2 which is oxidized to hydroperoxide in a kind of en reaction. This formation of hydroperoxides from unsaturated amines and molecular oxygen is known and has been observed especially with carbazoles (1), but normally requires singlet oxygen (1O2).

The hydroperoxide then oxidizes a long-chain aldehyde to carboxylic acid. The oxidation of carbonyl compounds (aldehydes / ketones) with peroxides or peracids to carboxylic acids or carboxylic acid esters is generally referred to as Baeyer-Villinger oxidation. Spectroscopic studies suggest that hydroxyflavin arises in the excited state and changes to the ground state with emission of light. This mechanism hardly answers the questions raised above. Rather, there are still unsolved problems. The Baeyer-Villinger oxidation has been known for a long time, but no light emission has ever been observed. Bio- and chemiluminescence reactions are mostly oxidation reactions, with the oxidized molecule ultimately forming the emitter. The luminescence of bacteria is also an oxidation reaction. The amazing thing about it, however, is that in the decisive reaction step (the formation of the excited state) water is split off from the emitter! This is at least unusual and in my opinion does not support the above reaction mechanism. Despite the still unresolved issue of the mechanism and the uncertainties based on it, luminescent bacteria are used for analytical purposes. The intensity of the emitted light depends heavily on the quality of the habitat of the microorganisms. This is how they react B. very sensitive to impurities and toxins. So you can add water samples to a standard suspension of luminescent bacteria and follow the decrease in light emission. The decrease in light intensity is proportional to the amount of impurities. 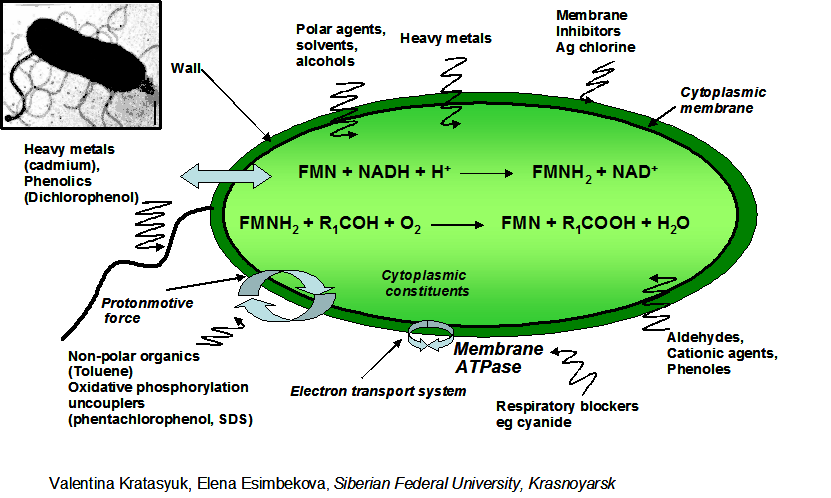 At the Siberian University of Krasnoyarsk, there is intensive research into questions of bioluminescence. The colleagues kindly provided me with the picture that is supposed to show how luminous bacteria interact with their environment.

The great sensitivity to external influences, the ease of cultivation and the now affordable and sophisticated methods of light measurement have also led to the fact that students have dealt with luminous bacteria as part of "Jugend Forscht". A group from the Ohrdruf-Gymnasium Gleichensee has investigated the effect of plastic components on the bioluminescence of luminescent bacteria and a student from the Ruperti-Gymnasium, Mühldorf studied: When bacteria shine - investigations on bacterial bioluminescence. Both groups were state winners in the respective federal states and successful participants in the national competition.

There was a famous battle in Shiloh on the Tennessee River during the American Civil War. About 3,000 soldiers were killed and 16,000 wounded in the course of the battle. The wounded had to endure for days in the cold, damp April weather. Bacterial infections and gangrene were common causes of death. In some of the injured, the wounds had a bluish glow. Often it was precisely these wounded who survived, hence the name "angels glow". It was only decades later that it was clear that this was probably an infection with the bacterium Photorhabdus luminescence acted. This bacterium is found in the saliva of nematodes. The nematodes transmit the bacteria to insects and the bacteria in turn secrete toxins that can kill insects and which also have an antibacterial effect. In this way, the insect killed by the nematode is kept free from infestation of other bacteria and can gradually be consumed by the nematode and the bacteria living symbiotic with it. The human body temperature is usually too high for Photorhabdus but the special conditions at the beginning of April 1862, low temperatures and drizzle, probably ensured that the injured body parts could cool down sufficiently Photorhabdus to serve as living space.