What are the rules of Dubai

The biggest myths: You have to know that for your Dubai vacation

Dubai is a spectacular travel destination with its spectacular architectural structures, its location on the Persian Gulf and the deserts. But there are also some myths about the local rules of conduct that prevent some vacationers from visiting the United Arab Emirates. We do away with these prejudices here and show what Dubai really is like. 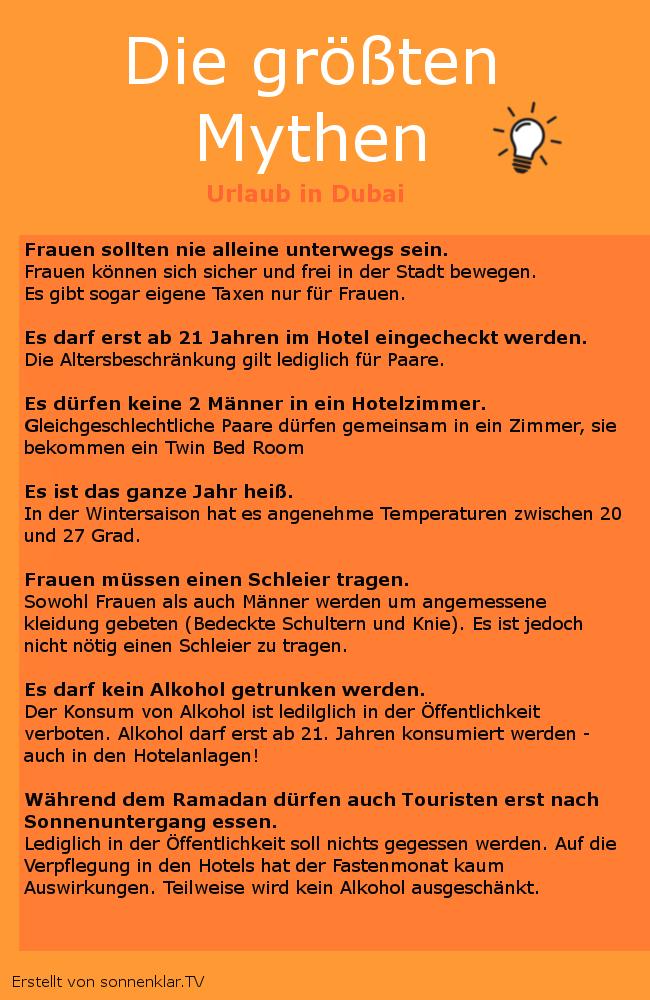 Further tips and information on the right behavior in Dubai

Dubai: also a destination for women

Veiled women are undoubtedly part of the streetscape of Dubai City. This sometimes irritates female vacationers and they wonder how to behave. Do I have to wear a veil too? Is it dangerous for me to be unveiled in Dubai? The all-clear can be given. Dubai is a country where the Occident and the Orient merge. Women are shown a great deal of respect. In contrast to some other emirates, you can easily move around the hotel day and night without a male companion. You can rent a rental car and drive it yourself. The women's seats in buses, the women's taxis and the special women's tables in some restaurants are also a show of respect and not discrimination.

In terms of clothing, women in the emirate also enjoy great freedom. You don't have to wear a veil and can wear pants. Although Dubai is very liberal, not too much skin should be shown in public. Deep necklines, free shoulders and mini skirts as well as hot pants are taboos that should be adhered to out of respect for the locals.

Appropriate clothing for both men and women

In Dubai, most of the locals wear traditional clothing. This means the women wear an abaya (black robe) over their clothing and the men wear a kandura (white robe). But there are also Emiratis who are dressed in western clothing.

Out of respect for the culture and given over to the locals, one should dress appropriately. That means shoulder and knee should be covered. This applies to both women and men. On the hotel beaches it is no problem to sunbathe in a bathing suit or bikini.

The best time to travel to Dubai

Dubai has a dry and hot climate with lots of sunshine all year round. Subtropical influences mean that there can be serious seasonal temperature fluctuations. Heat-resistant holidaymakers benefit from low-season prices in the hotels in the summer months between May and October. The daytime temperatures can be above 45 ° C and even at night it is rarely colder than 25 ° C.

In winter, the daily values ​​fluctuate between a pleasant 27 ° C and 33 ° C. At night it can get significantly cooler at 15 ° C, which is why a light jacket should be in your luggage. This time of year is therefore commonly referred to as the best time to travel to Dubai.

It is possible to drink alcohol in Dubai

Muslims are prohibited from drinking alcohol. For this reason, alcohol is not served in public. However, many western vacationers cannot imagine a vacation without wine and cocktail. The hotel operators know this and have a so-called liquor license, thanks to which they can serve alcohol to people over the age of 21 in the hotel.

Still, alcohol is a sensitive issue in Dubai. Vacationers should pay attention to this and not attract attention in public when drunk, as this is a punishable offense. A strict ban on alcohol counts when driving a car. Anyone caught with the lowest alcohol level at the wheel must expect severe penalties. There is also often uncertainty as to the extent to which alcohol can be imported into Dubai. Vacationers are allowed to take up to four liters of alcohol with them, provided it is for private use. You can get more detailed information about the entry and customs regulations on the website of the Foreign Office.

Ramadan is the month of fasting for Muslims. According to Islamic teaching, the Koran was revealed in it. When Ramadan begins is different every year. The beginning is based on the lunar cycle. During these holy weeks there are a few things to consider in Dubai, but most of them do not spoil the joy of vacation. Out of respect for the locals, vacationers should not smoke, eat or drink in public. Chewing gum should also be avoided. Tenderness in front of others should be strictly avoided.

In addition to your own behavior, it should be noted that life in Dubai in the month of fasting is a little different than usual. No alcohol is served in the hotels. While the large shopping malls are still open (and usually offer discounts), the restaurants and snack bars outside the hotel complex are closed during the day. Only at sunset, when the Muslims are allowed to eat again, do some restaurants open again. Then a real festival begins on the streets. There is live music, concerts and the whole city is lit up in the evenings. The festival can be compared a little with Christmas or New Year's Eve in Europe. So if you are also interested in culture, you should definitely come to Dubai at this time!

In the Islamic land, caresses should not be exchanged in public. This is considered immoral. Those who resist this can even expect warnings, fines or deportation. But it is not as strict as this sounds. Millions of western vacationers travel to the emirate without any difficulties. While kisses should be moved to the hotel room, holding hands in public is tolerated.

In Dubai it is quite common to ask for a credit card guarantee or cash deposit upon check-in. This will be paid out again when you check out.
Singles and same-sex couples can book a hotel room without restrictions. Two men are also allowed in a hotel room, they get a twin bed room.
In the case of a hotel room for a couple or two friends, one person must be at least 21 years old.

Our TV presenter Dirk Löbling has also been to Dubai several times and would spend his vacation there again at any time. He told us in an interview what fascinates him about the city. To the Dubai interview