When was the symbol of infinity introduced?

Since you cannot draw the infinite, symbols have to be used. The oldest abstract representations of all refer to infinity. On Malta, in 5500-year-old megalithic temples, the one carved in stone can be found again and again double spiralwhich, according to archaeologists, symbolized the eternal and the infinite:

The first illustration of infinity *

The developed from the spiral Uroboroswho have favourited the snake devouring its own tail. This infinity symbol can be found all over the world. It was used by the ancient Egyptians, the Tibetans and the Maya, although there was no connection between these peoples. Also in Michael Ende's novel The never ending Storythe snake symbol appears in the form of Auryn. 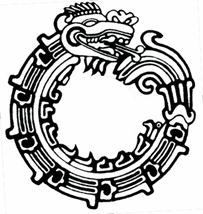 Uroboros version of the Maya

The most famous infinity symbol is that ►Lemniscates∞, made in 1656 by ►John Wallis was introduced. The symbol as such appeared in Roman inscriptions as early as the 1st century BC. Chr. On. It probably originated from a double M (the Roman name for 1000) and meant 100 million.

A simpler infinity symbol is three dots ... to represent an infinite ►Sequence or sum of numbers, e.g.

►Georg Cantor led the Hebrew Alephא to represent the ►Cardinal numbers infinite quantities and the Greek omega ω for infinite ►Ordinal numbers. While ∞ and ... on ►the potentially infinite are related אand ωa measure of actual infinity.

* Limestone relief from the Hypogeum of Hal Saflieni, Malta.