A government delegate hands the Spanish flag to a man in a fascist uniform. He competed for the División Azul. She fought for Hitler at the time. 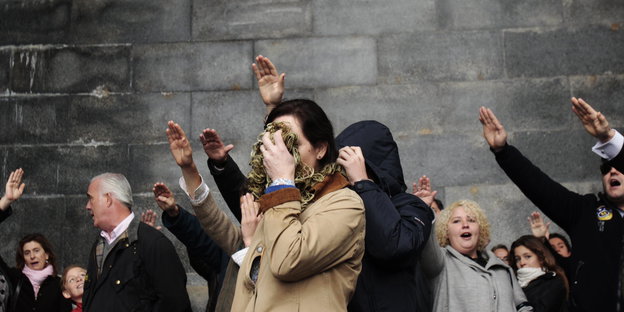 “Coming to terms with the past”: Francisco Franco's grave is located in the “Valley of the Fallen”. Today it is a tourist attraction and a meeting place for fans. Image: Reuters

MADRID taz | A photo on Facebook is causing a stir in Spain. The picture shows María de los Llanos de Luna, the delegate of the Spanish central government in Catalonia, as she shakes hands and hands over a certificate of honor to a man in the uniform of the Spanish Falange, the fascist party of the Franco dictatorship.

The scene was recorded on Saturday in a barracks of the Spanish police unit Guardia Civil in Sant Andreu de la Barca, not far from Barcelona. It was the celebration of the 169th anniversary of the Guardia Civil paramilitary police force. Various traditional associations were invited, including the “Brotherhood of Fighters of the División Azul”, in whose name the honoree appeared in a fascist uniform.

A dozen other participants had dressed up in blue shirts and red berets. Among them at least two well-known members of the right-wing, xenophobic Platform for Catalonia (PxC). The Catalan ruling party CiU demands "out of respect for the victims of the Holocaust and Nazi barbarism" the "immediate resignation" of government delegate De Los Llanos de Luna.

With the exception of the conservative People's Party (PP) of Spain's Prime Minister Mariano Rajoy and another small formation, all parties in the Catalan parliament join this demand. The División Azul was a troop of 47,000 volunteers from Spain of dictator General Francisco Franco who fought as Division 250 in the German Wehrmacht from 1941 to 1943 on the Eastern Front around Stalingrad.

Around 4,000 division members lost their lives in the process. The leadership of the Guardia Civil defends the invitation and honor of the brotherhood of the División Azul. “These associations, especially those that refer to defunct military units, see themselves in a historical context, without ideology. They consist of family members of the former members of these units ”, it says in an“ explanatory note ”.

The largest union in the Guardia Civil AUGC sees it differently. The ceremony was "condemnable, rancid and forever yesterday". The union is calling for the commanders of the unit in Catalonia to be replaced and for “a comprehensive investigation” into how this could have come about.

Because such celebrations would “seriously damage the image of the Guardia Civil”. The AUGC complains that the command of the police unit in Barcelona had already attracted attention because of its undemocratic behavior. For example, union posters were destroyed during the staff council elections.

It is not the first time that a Spanish government has made a name for itself in connection with the División Azul for failing to come to terms with the past. In 2004 the then Socialist Defense Minister José Bono invited the Brotherhood of Fighters of the División Azul to the parade on the Spanish national holiday, October 12th, in Madrid.