What is meant by a blue microphone

Calibration of the built-in microphone in Android devices

Assessment of the uncertainties

This chapter estimates the systematic and statistical errors when calibrating according to the above recipe. The measurement results would not be usable without error estimation.

The measurement in the diffuse field of a living room is subject to the "curse of the many parameters". Changes to the microphone position by a few cm lead to very different results. The main reason is the interactions between the various reflections. As a result, averaging and / or processing of the results with certain smoothing algorithms are necessary.

In order to ensure that the results processed in this way are not only "embellished" but can also be used for calibration, they are compared here with measurements in the free field and pressure measurements. With precisely defined conditions, the conversion of the methods into one another is possible with accuracies of less than 1 dB [Milhomem], [Jacketta].

The leading principle was to find sound sources whose frequency response over a few octaves a) has no visible comb filter effects due to reflections without any smoothing and b) does not depend on small changes in the position of the microphone. In these areas, the results measured by mobile phone and measuring microphone were compared so that the differences in frequency responses for free field and pressure could be put together. These were then compared in turn with the results of the recipe described above.

For the Low frequency range a so-called Linkwitz dipole was used. This could optionally be closed by placing a sealed plate on the sound outlet. This made two series of measurements possible: on the one hand on the open system in the mouth to imitate a free field, on the other hand in the closed system. The former seems possible for the bass range because the observed wavelengths are considerably larger than the sound outlet opening. So one can assume that the air flow there is relatively even. In the closed system, there should also be an even pressure due to the long wavelength in the bass range. These theses were verified by at least six, often considerably more, measurements with different microphone positions.

The measurements were made with a 2 sec. long log sweep with 20-20kHz. The CAT S60 cell phone was used again for the internal microphone, and a calibrated Audix TM1 as the measurement microphone. The connection was made via an iRig PRE preamplifier to the jack socket. The frequency correction mentioned above was also taken into account. Overall, the following picture emerged: 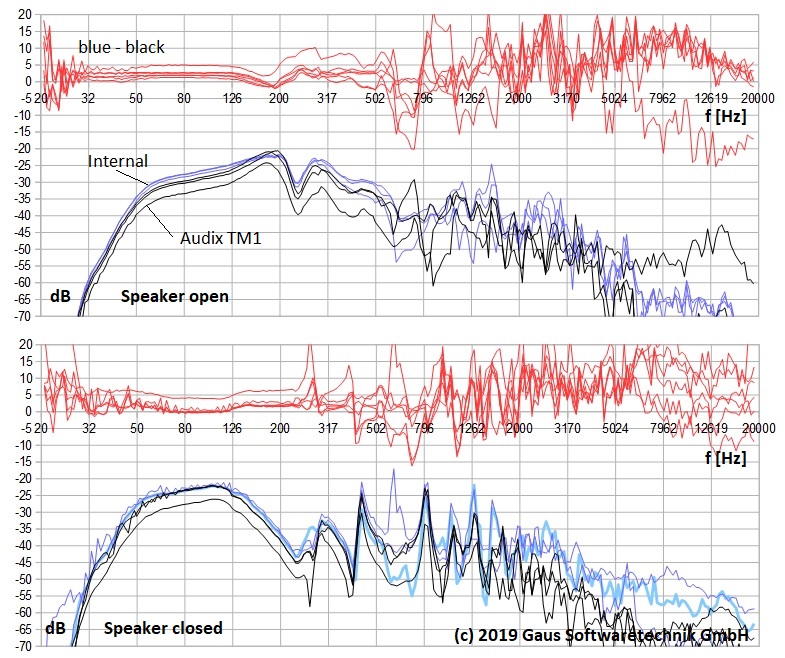 Comparison of the frequency responses of an internal cell phone microphone with a measurement microphone inside the housing of a Linkwitz dipole. The red curves show the differences in dB.

To get a free field in Midrange An Expolinear Görlich midrange driver was used to simulate it. The particularly stiff sandwich membrane used in this chassis should generate a wave field that is as uniform as possible to simulate a free field.

Expolinear Görlich TT 130 G bass-midrange speaker connected to a Lamm 1.2 Reference power amplifier via a voltage divider. A block made of solid concrete with a tube approx. 34 cm long and 12 cm in diameter served as the housing.
In fact, it can be seen that the determined frequency responses in the range of 120 to 2000 Hz hardly depend on the position of the microphone for both the mobile phone and the measurement microphone. The changes are not significant in relation to the different characteristics of the microphones. The picture shows the frequency responses analogous to the first measurements: Different frequency responses from the cell phone measurement are blue, those determined by TM1 are black. Red is the calibration curve formed from the difference between the mean values. The different amplitudes result from the different distances of the hand from the membrane. It can be seen that the characteristic does not change even in a 15 dB weaker sound field. The data from 6 measurements of the TM1 also hardly differ from each other in the area under consideration; the mean value is shown here. For the measurements, the insulating material was removed from the housing (open to the rear), which resulted in the clearly visible resonance at 200 Hz. No possibility was found for pressure measurements. Measurements in the closed case of the midrange driver did not provide reliable results.

In the high frequency range, a few near-field experiments were started with various large-area electrostats, magnetostats, ribbons and air-motion transformers, the results of which were all disappointing. Obviously a free point source is a better choice. Therefore the tests were continued with different plasma tweeters. Plasma tweeters work without mechanical parts by ionizing the air, i.e. the near field is not falsified by wave propagation in an oscillating medium. In fact, the frequency response and impulse response resulted in much clearer frequency responses than the other tweeters.

Broadband plasma loudspeaker as an almost ideal point-shaped sound source for the range above 2000 Hz. The purple glowing discharge is visible slightly above the center of the image. The music frequency is modulated on the 4 MHz carrier. The loudspeakers cannot be used for music enjoyment due to the low level and the discharge noises, but they produce an impressive location and stage for testing purposes.
The results are again shown analogous to the first measurement without any smoothing. The frequency response, which is superior to any conventional system, is typical of plasma tweeters, as no mechanical media are used. You can see that the cell phone microphone is probably reaching its limits in this area due to reflections on the housing. At approx. 14 kHz, the sound pressure also changes significantly (approx. 10 dB) depending on the measurement, i.e. it depends heavily on the position of the device. In this area, microphone calibration would also not be effective.

If the areas of the various near-field measurements are added together, the following picture emerges for the calibration curve:

The light green or dark green curve comes from data from the closed or open Linkwitz dipole, the blue curve was measured in the near field of the Görlich midrange driver and the brown curve comes from measurements on the plasma tweeter.

In the range from 80 to approx. 4000 Hz, the significant errors of the cell phone microphone are recorded similarly by all measurements. The curves rise in this area by approximately 10 dB. The deviation of the curves from one another, however, is considerably smaller. The accuracy is reduced below 80 Hz. As discussed above, the range above 4000 Hz is not reliable enough for measurements. It should only be used for orientation, e.g. to generate targeted hearing tests.

In the range up to 4000 Hz, the curve runs very smoothly overall. In this respect, it seems appropriate to smooth the curves recorded at the listening position with an octave bandwidth.

If one forms the mean value of the merged curves in the overlapping areas and smooths the result with an octave bandwidth, the following picture results together with the values ​​measured at the listening position:

The black curve is the result of the combined near-field measurements, the thin curves in red and green are recorded at the listening position according to the above recipe. Their mean value, smoothed over an octave, is shown in blue. From 200 Hz to around 4000 Hz, an excellent match can be seen - the deviations are in the range of 1 or 2 dB. The fluctuations in the unsmoothed curves seem to compensate for each other. Since it cannot be assumed that this is always the case, the error in the "Conclusion" box is estimated very conservatively.