What is KNO3 result after heating

Special notes for schools
Potassium nitrate is not an explosive, but can be used to manufacture such substances (legal notice). In experiments on melting and heating potassium nitrate, a protective screen is necessary in addition to the mandatory eye and fire protection. 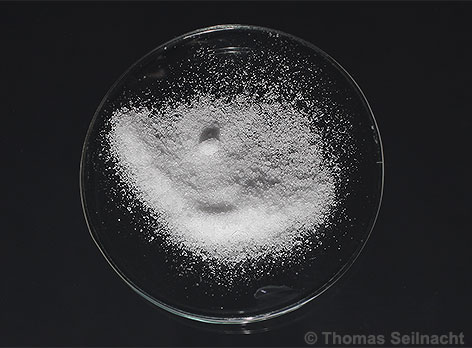 Potassium nitrate dissolves in the water when it cools, whereby a lot of heat is absorbed by the environment. When the warm, concentrated solution crystallizes out in a Petri dish, elongated, clear crystals form according to the orthorhombic system: 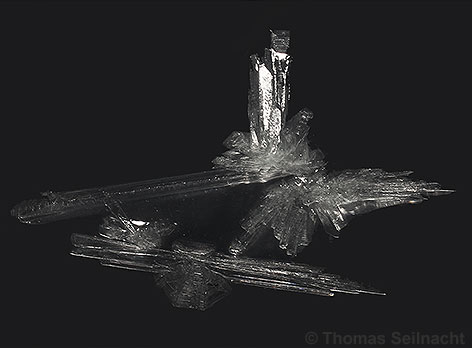 When heated above the melting temperature, oxygen is released with the formation of potassium nitrite. A hot potassium nitrate melt reacts violently with organic compounds, as well as with coal and sulfur. The demonstration in the hard-to-melt test tube may only be performed in compliance with the safety regulations. Only the smallest portions may be thrown into the hot melt, protective goggles and protective glasses are necessary. 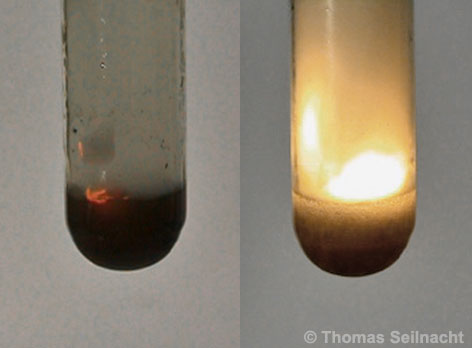 Pieces of activated carbon (left) and sulfur (right) in a potassium nitrate melt.

Manufacturing
In the past, potassium nitrate was extracted from potash nitrate, which was mined in the deposits in India, China, Germany or Hungary. Later it was made from Chile nitrate. The sodium nitrate obtained from this was reacted with potassium chloride in a hot, aqueous solution:

use
Potassium nitrate is needed for numerous experiments in chemistry classes: Potassium nitrate is approved as a food additive E 252 for curing meat or sausage products or in cheese: As an additive, it prevents the red color from decomposing so that the meat retains its red color. Agriculture uses it as a valuable fertilizer due to its nitrogen content. In the metal industry it is used as a welding and hardening salt in the processing of metals. Potassium nitrate is used as an oxidizing agent for the production of black powder, fuses, fireworks, flares or smoke grenades. 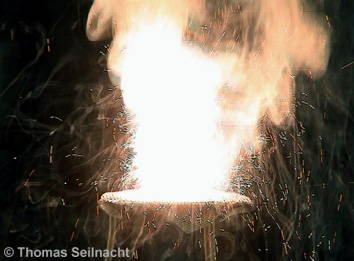 This demonstration is not recommended for teaching. > Film

history
Although the Babylonians already knew about saltpetre in 1700 BC, the Greeks, Romans and Arabs no longer indicated that the substance was used. In the 13th century, the saltpetre was mentioned again by Roger Bacon when describing black powder. The alchemist probably got the recipe from Chinese monks. In China, hand rifles were made as early as 1288. These had a caliber with a diameter of 30 millimeters and were 45 centimeters long.

The monk Bertholt Schwarz was therefore probably not responsible for the invention of black powder. He used the “Fireworks Book” from the Middle Ages, the origin of which can no longer be precisely clarified today. Schwarz worked as a gunsmith in Freiburg im Breisgau. He was the inventor of the Steinbüchse, a short-barreled artillery in which a ball made of stone was fastened with wooden wedges and shot down by the explosion of the powder room behind it. Bertholt Schwarz improved the composition of black powder and invented the first guns. Schwarz was executed in 1389 on the orders of Emperor Wenceslaus. 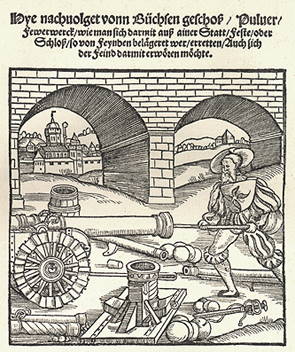 Title page of the famous book of fireworks after printing in Augsburg in 1529.
The author of the fireworks book is no longer known today. Around 1408 there was a manuscript of it in the Prussian State Library. The book was now one of the "forbidden books" that were not freely accessible to everyone. At the beginning of the book, twelve questions are answered that are fundamental for the manufacture of "rifles" (today one would say: firearms):

“The first question (is) whether the fire drives the stone out of the box or the mist that emanates from the fire. Now some are saying that fire has the power to drive stone. But I say: the haze has the power to drive the stone. An example: Take a pound of good powder and put it in a creamy wine barrel and seal it tightly so that no mist can escape, (unless) from the willow hole with which you want to light it. Unless it is lit, the powder is burnt under the hand and the mist breaks the barrel (...)

The third question is whether a little powder is more likely to blow up a can or keep shooting than if you fill it up to the block with powder. Then I say: if you fill the can up to the log, the fire and the mist may not have enough width to complete the shot until the fire has burned out part of it and the mist knocks out the log. But if the rifle is the third part up to the fourth part (loaded), the powder can generally burn all at once and (then) the vapor can do its job, and you keep shooting, and the rifle then jumps much sooner if you do it fills up to the block with crushed powder ”. (Text excerpt from the fireworks book, page 2)

In the 13th century, Marcus Graecus already mentioned saltpetre in the book Liber ignium ("Book of Fire") for the production of highly flammable mixtures. Until the invention of gun cotton in the 19th century, black powder was the only explosive available for the manufacture of firearms. Saltpeter was systematically extracted from a “nitrous earth” that was collected in cattle sheds and slaughterhouses. The chemically bound nitrogen was converted from animal urine into nitrate with the help of bacteria. When the nitrous earth was boiled with hot water, the nitrate dissolved, and evaporation left a brown residue, the “red wall nitrate”. This essentially consisted of calcium nitrate, which was then converted into potassium nitrate with potash: 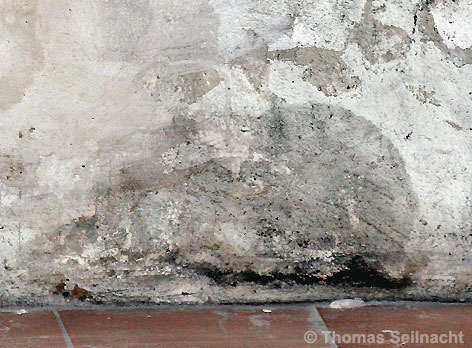 Wall nitrate on a cellar wall.
After filtration of the solution and gradual crystallization, the saltpetre was obtained in pure, crystalline form. To improve the yield, saltpeter gardens were established from the 17th century. These consisted of elongated piles of earth made from animal dung, lime and urine and protected from rain. Human corpses are also said to have been thrown onto this pile of earth. After two years so much saltpeter had formed that one kilogram of saltpeter could be extracted from six kilograms of earth. Until then, another source was wall nitrate, which had formed on the walls of the cattle sheds.

The import of Chile nitrate to Europe began in the middle of the 19th century. It was found in the northern Chilean Atacama Desert in mighty, one to two meters thick and up to 600 kilometers long deposits. Chilean saltpeter mainly contained sodium nitrate, which could easily be converted into potassium nitrate. Chile waged war against Peru and Bolivia from 1879 to 1884 over the deposits in the Atacama region. The "saltpeter war" claimed 14,000 deaths and secured Chile as victor the extensive saltpeter deposits.


Media and experiments
Information on nitrates
Experiments on the subject of oxidations
Teaching unit on oxidizing substances
<?