What is the history of the sex symbol 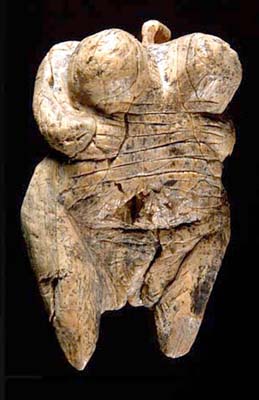 In September 2008 a hobby archaeologist found a female figure in the karst cave “Hohle Fels” near Schelklingen, whose age is estimated to be around 35,000 years. In its May online edition, Der Spiegel commented on this find as a “beguiling sex symbol” and “fertility fetish” and thus included the find in the gallery of pornographic male fantasies: Big breasts, small head - it’s clear that it’s nothing other than a prehistoric wank template can act. Why else would you bother to carve women's bodies out of rock-hard stuff ?!

It goes without saying that this creation also goes to the account of the otherwise stammering boys with an overbite: They were men who, despite scientifically assumed mental limitations from the Neanderthal from the world, have always had their faces resp. have cut their fantasies into the flesh. So don't be surprised, girls, if it still feels like you're being shot with a club today!

To this day it seems inconceivable that a creator's hand might have designed what even 35,000 years later touched in its expression of self-knowledge and power. At the end of patriarchal history, there may be no other reason for women to expose breasts and vulvae than to “bewitch” one of those drooling Neolithic males. After all, as the gentlemen early and late experts try to convey to us everywhere, it's about reproduction - uh, pardon me, about fertility. Makes tired men perk up, that's the motto, then as now. ´

This also requires a bit of physical effort, lifting a bit of boobs here, a bit of shaving your pubic area ... because how else can the seemingly presentative gestures of the figurines be interpreted, if not to a different, a strange view from the outside? Which logically can only be male. Didn't God create the world in the image of Adam? Well, and what do you like ?! Exactly what Scheens are looking for. Otherwise nothing happens in your pants and your head. Because to be honest: We'd all prefer someone with a little something to it! Or why else should you portray women so plump, sometimes almost exuberantly, disproportionately ?! Right for us.

Back to the future: Read from the pornographic-patriarchal view backwards

It is only interesting that - if we stay in the pornographic context - the know-it-alls omit that part of the body that plays the most important supporting role in the world in every poor pono: namely the phallus, which should not be missing in any moaning opera, in the context of prehistoric “fertility cults” but has not yet been excavated.

For which, on closer inspection, there are actually only two reasons: Either it was not significant enough (“they just had no idea that the man is the sperm donor!”) Or it was made of materials that would be used by a 35,000-year-old Were unable to withstand the stress test (wimps to plowshares). Well, omen is a noun.

The creators probably had something else to do

Much closer, however, is the assumption that our ancestors were not interested in the sexual aspects at all. Certainly they also enjoyed being touched and seduced in a knowing and knowledgeable, above all loving way. But it does not seem to have been the Kama Sutra of the Neolithic Age that the creators of symbolic female power may have considered worth depicting. Because although all over the country lay people addicted to digging and doctoral supervisors are unanimous - even in the Neolithic, I once claim, sexualizing people looked different from these majestically standing (!), Female figures with closed (!) Legs.
The mistake may well be sparked by the fact that men tend to rarely have lustful sexual encounters with women. Then you would have realized your mistake more easily. 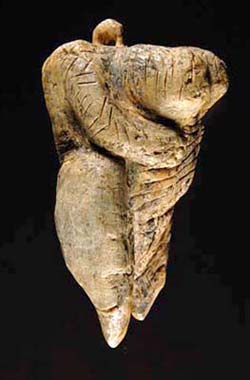 From the inside into the world

In general, all of these speculations only point to one thing: the pornographic spirit of today's, mostly male, viewer. What normal person would otherwise get the idea that there are no more secrets hidden behind their breasts and lap than that of towing a man? No, the world is not made to please the eye of the beholder. She actually takes pleasure in herself, and it is not all for a purpose, but at times sheer self-interest.

And just in case someone still gets the idea to speak of fertility symbols here: All female figures lack the most universal fertility symbol per se! What is it? Yes, exactly, the pregnant belly. Everyone would then understand what the kind of symbols are to be generally understandable. Ergo: the stomach is missing, so nothing to do with fertility. In these mighty tiny figures, the creators refer to something completely different, which is actually much closer.

"My stomach is mine!"

So let's assume that the people of early history weren't bored, so that they got the idea to portray Idel's Lisa in Eve costumes. Let us also assume that our ancestors - unfortunately in contrast to today's contemporaries - were owners of their bodies. "My stomach, my breasts, my vulva - belong to me." This simple sentence should not have occurred to anyone 35,000 years ago. What for? You don't have to postulate something self-evident.

Femininity beyond orientation to the male gaze

So if the plasticization of femininity was not a hint, revolution, resistance and self-assertion, then it was what it is today: the symbolization of femininity. And not that of Inge, Michaela or Claudia - which should make the lack of the head, which was already considered a place of unmistakable individuality in the early days, quite clear.

No, it was about the generalized “representation”, the symbolization of the feminine. And this not, as the wrong word “representation” suggests, for the other's gaze, but in the sense of the accumulation of meaning in a defined place - in the symbolic sense.

Symbols a female culture of “more”

So I claim - based solely on what I see there, minus my post-patriarchal-pornographed conditioning - that these female figures are the first places of an abstract cultural creation. As the general could be detached from the individual, special body of the individual woman - the shamanic tradition speaks here of the “totem”, the essence - and figuratively “gathered” in one place, a “more” emerged which reached beyond the individual . And continues to do so today.

There is consequently more to these figures than the mere image reveals. In them lies a feminine-symbolic self-image, which wanted to be the starting point of a cultural model. That for me obviously has to do with physicality, difference (difference) and abundance.

Your own being as a starting point in the world

An exciting starting point for cultural travel research today: How would we creators of our reality symbolically manifest it today? What would be the starting point and goal of female culture for us?

The women 35,000 years ago - so I claim today - started from the most obvious: their bodies and what they have in common. In figurines, carved from the bones of another living being, they symbolically put them into the world - perhaps to remember what they were, beyond their individual differences? I don't think they needed reinforcement in the sense of shame, as we women today often need portraits of vigorous, naked women. Their bodies hadn't gone through 4000 years of abuse either. Their breasts and their lap were their starting point for culture. It is possible that we can build on this tradition today if we can free ourselves from an understanding of culture that looks at things from the outside instead of living them from the inside.

Then these figures might not be called “Venus von Willendorf”, but “Michaela from Berlin.