Big bang and singularity are possible

How did the universe begin: hot big bang or slow thawing?

Were the density variations from which the structures of the universe arose in a billionth of a billionth of a billionth of a second after the Big Bang or 50 trillion years ago in a universe that has always existed? The anisotropies of the cosmic background radiation observed by Planck are a snapshot of the oldest light in our universe. The picture shows the tiny temperature fluctuations that correspond to regions with slightly different densities and thus represent the origins of all future structures: today's stars and galaxies.
Image download

Did the universe begin as a hot big bang or is it slowly thawing from an extremely cold and almost static state? Prof. Dr. Christof Wetterich, physicist at Heidelberg University, has developed a theoretical approach that supplements the standard model of cosmic expansion that has been in use for almost 100 years with an alternative image. The original explosion did not take place 13.8 billion years ago - the "beginning of the universe" rather extends over an infinitely long period of time in the past. The mass of all particles increases steadily. Instead of expanding, the universe is shrinking over extended periods of time, as the Heidelberg scientist explains.

Cosmologists usually describe the “beginning of the universe” as a big bang. The closer you get to the Big Bang in time, the more the geometry of space and time bends. Physicists call this a singularity - the term describes conditions whose physical laws are not defined. In the case of the Big Bang, the curvature of space-time becomes infinitely large. Shortly after the Big Bang, the universe was extremely hot and dense. But another “picture” is also possible, according to Prof. Wetterich: If the masses of all elementary particles grow over time and the gravitational force weakens, the universe could also have started extremely cold and slowly. After that, the universe has always existed, and the earliest state was almost static. The primal explosion extends over an infinitely long period of time in the past. The scientist from the Institute for Theoretical Physics assumes that the first indirectly observable "events" occurred 50 trillion years ago - and not in a billionth of a billionth of a billionth of a second after the Big Bang. "There is no longer any singularity in this new picture of the cosmos," says Prof. Wetterich. 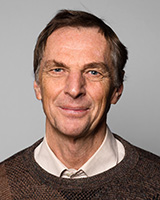 Prof. Wetterich's hypothesis is based on a model that explains dark energy and the early “inflationary universe” using a single scalar field that changes over time. After that, all masses grow with the value of this field. “This is reminiscent of the Higgs boson recently discovered in Geneva. This elementary particle has confirmed the physicists' idea that particle masses depend on field values ​​and are therefore variable, ”explains the Heidelberg scientist. In Wetterich's approach, all masses are proportional to the value of the so-called cosmon field, which increases in the course of cosmological evolution. “The natural consequence of this model is the image of a universe that develops very slowly from an extremely cold state and shrinks instead of expanding over long periods of time,” says Prof. Wetterich.

The previous picture of the Big Bang does not become "invalid", as Prof. Wetterich says. “Physicists are used to describing observed facts in different images.” Light can be represented by particles as well as waves. As the Heidelberg scientist explains, his model can be described equivalently in the picture of the Big Bang. “This is very useful for making a lot of practical predictions about the consequences of this new theoretical approach. However, if one asks the question of the 'beginning' of the universe, the description without singularity seems to offer a number of advantages, ”emphasizes Prof. Wetterich. "And for the often expressed discomfort that something must have existed before the Big Bang, there is no longer any basis in the new description."