What do you think of DNA editing 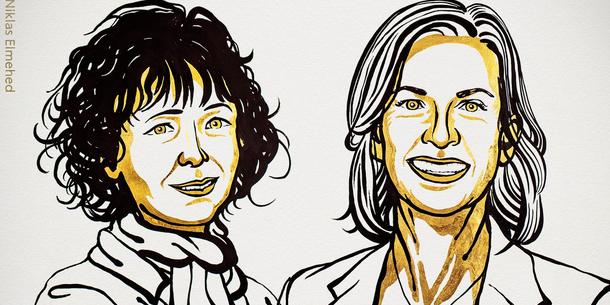 CRISPR / Cas9 - this strange abbreviation stands for a new process to change DNA building blocks in the genome, as easily and precisely as it was unimaginable until recently. Although it comes from bacteria, these “gene scissors” work in almost all living cells and organisms: They promise new possibilities against AIDS, cancer and a number of hereditary diseases - but also in the breeding of plants and animals. Emmanuelle Charpentier and Jennifer Doudna, two molecular biologists, received the 2020 Nobel Prize in Chemistry for this. But as is so often the case with biotechnological innovations: Europe is having a hard time seizing the opportunities.

CRISPR / Cas9 (an explanation of the complicated name can be found here) is a new, molecular biological method for cutting DNA in a targeted manner and then changing it. In this way, individual genes - more precisely: DNA building blocks - can be rewritten or "edited". Such processes, which also include zinc finger nucleases or TALEN, are therefore collectively referred to as Genome editing (or Gene editing), meanwhile also "gene scissors" or "gene surgery".

Jennifer Doudna and Emmanuelle Charpentier, the two "inventors" of the CRISPR / Cas process, have meanwhile become international pop stars of science. For years they have been celebrated and showered with prizes. In 2020 they received the Nobel Prize in Chemistry. (Photo: awarding of the Breakthrough Prize for Life Sciences 2015).

Feng Zhang from Broad Institute in Boston applied CRISPR / Cas to mouse and human cells for the first time. After a long dispute, US courts have also granted him his own patent rights.

Targeted mutation in three steps. The CRISPR / Cas system consists of a molecular “probe” (Guide RNA), which finds exactly the target site for a mutation in the genome, and a “pair of scissors” (Cas9 protein) (above), which locates the DNA double strand exactly there severed. It is then put back together by the cell's own repair mechanisms: As a rule, individual DNA components are lost at the break point or they are incorrectly “patched” (non-homologous recombination, bottom right). The result: the gene in question can no longer be read correctly and is thus blocked. It is also possible to replace individual DNA building blocks according to a template when repairing the break. Such organisms are only classified internationally as "genetically modified" if a new gene sequence is also inserted. (homologous recombination, left).

The CRISPR / Cas system originally comes from bacteria. It serves as a kind of immune system with which they can recognize and fend off “hostile” viruses on the basis of previously stored DNA fragments. After understanding this mechanism in detail, a few years ago (2012, see box on the left) scientists had the brilliant idea of ​​developing a molecular biological tool from it. Surprisingly, it works not only with bacteria, but universally with all living cells - in human, but also in those of animals and plants.

At the core, everyone is running Genome editing-Procedure in three steps: First of all, in the huge genome - which often consists of billions of base pairs (DNA building blocks) - the exact point at which a change is to be made must be found and controlled. For this purpose, a suitable "probe" is constructed, which in the CRISPR method is made from RNA sections (also Guide RNA called), which corresponds to the DNA sequence of the respective target sequence. When the probe has “found” this, it docks there in order to cut the DNA double strand with molecular “scissors” at precisely this point - with CRISPR it is the Cas9 protein that is coupled to the RNA probe.

Then the cell's own repair systems come into action: They patch the severed DNA strand back together - but mostly with small errors. The result: the gene in question can no longer be read correctly and is thus blocked. It is also possible to replace individual DNA building blocks during the repair after the cut or to incorporate new short sequences into the DNA strand.

The basic mechanism - causing a double-strand break and then repairing it - is the same as that of any random natural mutation. Mutation breeding also uses such processes. It is only radiation or chemicals that trigger such breaks, uncontrolled and in large numbers. The key difference: when Genome editing it happens precisely at a single predetermined point in the genome - precisely at the point that is responsible for the property to be changed.

There is at CRISPR and the others Genome editing-Procedure similar risks as with genetic engineering?

Genome editing - especially CRISPR - reduces the problems that arise from the randomness of breeding - that means time and cost savings, but also more security through more precision. Every breed changes genes, but only with the new ones Genome editing-Procedures, these changes are known in detail - they differ fundamentally from conventional breeding, but also from genetic engineering.

In classic genetic engineering, it is a matter of chance at which point in the genome of a plant the new, additional gene is integrated. From this, critics deduce a fundamental risk of genetic engineering: the untargeted incorporation of the “foreign” gene at any point in the genome can impair gene functions and possibly change the properties of a plant disadvantageously. Such “unintended side effects” are a major reason why approval procedures are required for genetically modified (GM) plants in almost all countries of the world. Manufacturers have to prove the safety of their products before they can be put on the market. So far this concept, which has been in use for 25 years, has worked well. However, the approval procedures for GM plants are so time-consuming and costly that only large international corporations are able to do so.

There is hardly such a “risk” of accidental or unintentional changes with edited plants. It is entirely possible that the CRISPR / Cas system cuts the DNA strand at the “wrong” point, but there are off targetEffects are actually nothing more than another mutation, as occurs in large numbers with every natural reproduction and reproduction. Even two plants of the same variety, which appear to be standing in a single field, differ in their mutations. In wheat, for example, around 100 to 120 natural mutations occur in a single plant from one generation to the next, randomly and individually unknown.

Still you want off target- Avoid effects - unintentional mutations - in CRISPR applications as far as possible. In the meantime, the molecular tools - CRISPR probes and, above all, other variants of the Cas protein scissors (such as Cpf1) - have been further developed and their targeting accuracy has once again been significantly improved. And: the longer an RNA probe (Guide RNA) is created, with which the respective target region in the genome is tracked down, the less likely it is that precisely this sequence happens to be present again in the genome. Incorrect cuts can only occur there if the probe RNA exactly matches sections in the genome.

"No genetic engineering through the back door" - is this campaign against that Genome editing justified?

Organizations and action groups that have rejected classic genetic engineering in plants from the start also want to block the new processes. “Strictly regulate genetic engineering”, they demand, throwing old genetic engineering and new genetic scissors into the same pot - although the two are fundamentally different from each other. The general objections to genetic engineering, which have been repeated unchanged for many years, are simply transferred to CRISPR plants. This is associated with "great risks for humans, animals and the environment". The precautionary principle required “measures to be taken to protect the environment and human health”. 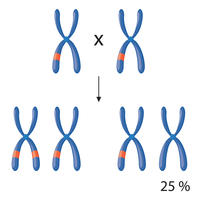 Ausmendeln. Among the offspring of two plants with genetically engineered CRISPR tools (red), a quarter are "transgene-free" (bottom right), according to Mendel's genetic rules. We will continue to work with these.
Graphics: pigurdesign / www.transgen.de

The CRISPR tools required for editing are - Guide RNA and Cas cutting proteins - so far mostly introduced into a cell by genetic engineering. However, once they have served their purpose and triggered the intended mutation, the CRISPR tools are no longer needed and are "discarded" from the cell. The previously introduced gene construct with the “building instructions” for the CRISPR tools is subject to inheritance laws: After propagation, it is no longer present in a quarter of the offspring. It's about these plants: successfully edited, but without introduced foreign genes. They are verifiable "transgene-free". Only with these will we continue to work, for example to breed a new variety. Only the new, edited characteristic is then present in the seed - such as resistance to fungal diseases - but no DNA traces that allow clear conclusions to be drawn about the method used. (More on this in the transGEN video CRISPR in plants: for example wheat)

In addition, the technology is evolving rapidly. There are now methods with which the DNA (or RNA) sequences required for a CRISPR operation can be introduced directly into the plant cells - without having to go through a corresponding gene construct.

In the simple variants it leads Genome editing to plants with punctual changes in individual DNA components - as they can also arise accidentally, without any technical intervention under natural conditions. In the end, there is no foreign, externally introduced genetic material in the edited products - such as seeds. Unlike genetically modified plants, they are "transgene-free".

However, the ECJ (European Court of Justice) ruled on July 25, 2018 that the new Genome editing-Processes are to be regarded as genetic engineering and are subject to the same approval and labeling regulations as genetically modified organisms (GMOs). The judgment was based on a purely legal interpretation of the existing EU genetic engineering law. Yet that is more than 30 years old and dates from a time when nobody like a procedure Genome editing could imagine.

However, these outdated laws stipulate the conditions under which CRISPR & Co may be used. De facto, they act as bans: The expensive, complex approval procedures can hardly be met for research institutions or small companies. In addition, genome-edited plants and products would have to be labeled as "genetically modified" - which is not only scientifically incorrect, but also transfers the negative image of genetic engineering to the new processes.

Other countries, such as the USA, Canada, Argentina, Brazil, Australia, Japan or Israel have taken a different path. They proceed on a case-by-case basis: Newly edited plants are checked in advance by the authorities to determine whether they are to be regarded as a normal breed or whether they fall under the respective genetic engineering regulations. In the US, numerous edited plants that are currently under development have already been classified as "non-GMO", such as wheat, soybeans, potatoes, corn or tomatoes with various new characteristics. Neither in field trials nor in the case of commercial cultivation, special rules apply to these plants there. How agricultural imports from such countries should be kept “genome editing-free” without the possibility of proof is completely unclear.

Since the ECJ ruling, all of the major scientific organizations have come out in favor of revising the outdated GMO definition. They recommend exempting genome-edited plants from the genetic engineering regulations if no alien genetic information has been introduced and the change could also have occurred naturally or accidentally or through conventional breeding.