Before Finland gained independence in 1917, he served in the Russian army, where he rose to the rank of general. He was later appointed Field Marshal in Finland, and during World War II he was Commander-in-Chief of the Finnish Armed Forces and later became President. A soldier had never been president of Finland and was never elected to that office again after Mannerheim. He was 78 when he retired for health reasons.

From the Russian army to the Finnish presidency 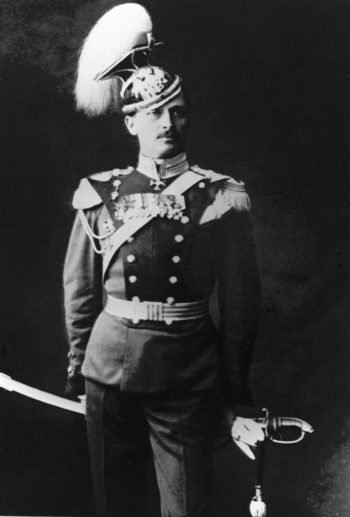 Mannerheim poses in his Russian military uniform in the early 1900s. Photo: Lehtikuva

Mannerheim was a native of Finland, but joined the Russian army in the fall of 1887 at the age of 20 and served the Tsar for 30 years from then on. He was very close to the court of the tsars and fled to Finland after the revolution in January 1918.

Immediately after gaining independence, Finland went through a brief but merciless civil war between the reds, i.e. the socialists, and the whites, the bourgeois forces. Mannerheim headed the White Army, which defeated the Reds - often with harsh measures. Foreign powers also interfered in the civil war: Germany supported the whites and Soviet Russia the reds.

Civil war tore the nation apart, and its scars did not begin to heal until the late 1930s, when Mannerheim entered into dialogue with the left and managed to win the trust of the Social Democrats.

Mannerheim faced many opponents in Finland in the 1920s and 1930s, but when the Soviet Union attacked Finland in the fall of 1939, the Social Democrats favored his appointment as Army Commander-in-Chief. He retained the confidence of the left in the Continuation War, including against the Soviet Union, which began in the summer of 1941.

Unanimously persuaded to take over the presidency 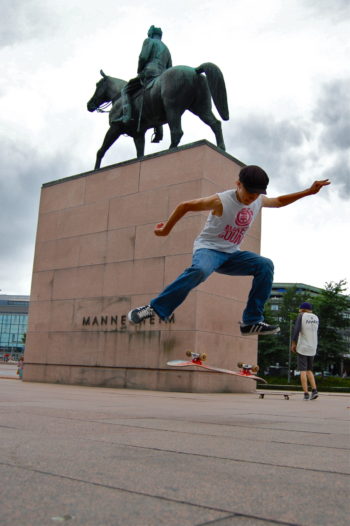 Over the decades, new buildings have been erected around Mannerheim's equestrian statue in Helsinki. Today children perform their tricks with their skateboards in the square around him. Photo: Emilia Kangasluoma

When the parliament elected Mannerheim as president in August 1944, Finland's independence was seriously threatened. Finland had been at war with the Soviet Union for three years and had a military alliance with Germany.
The Soviet army carried out attacks all summer. Finland's army had to withdraw and suffered heavy losses. The war had already cost the lives of 70,000 Finnish soldiers.

Parliament urged Finland to end its alliance with Germany and to conclude a separate peace with the Soviet Union.

MPs believed that only Mannerheim had the authority to lead the country from war to peace. Because of this, right, center, and left wing politicians convinced a reluctant Mannerheim to become head of state. Despite the burden of history, Mannerheim was successful in this role.

In autumn 1944 an armistice was agreed with the Soviet Union. Its conditions were harsh, but the country was spared occupation and retained its independence and democratic system. Finland separated from the alliance with Germany and expelled German troops from northern Finland in the winter of 1945.

After the war, the Soviet Union demanded that Finnish war leadership be punished. At the urging of the Soviet Union, President Risto Ryti, Prime Minister Edvin Linkomies and Finance Minister Väinö Tanner, who had also chaired the Social Democratic Party during the war, were found guilty, along with others.

Mannerheim, on the other hand, was not convicted, although his position during the war had been at least as important as that of the political leadership, who received prison sentences. But the Soviet Union did not actively demand his condemnation. However, the Soviet press was very critical of him after the war. 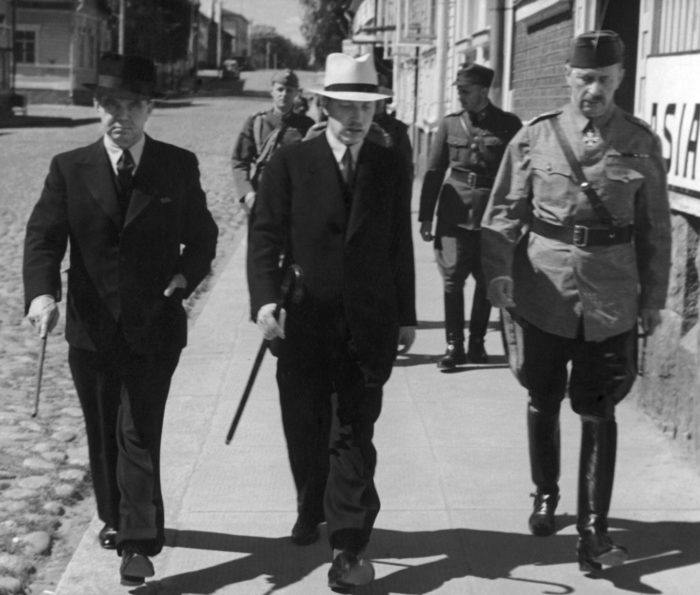 In July 1941 Mannerheim (right) is walking with President Risto Ryti (center) and Prime Minister Jukka Rangell through the town of Mikkeli, where the Finnish military was then based. Photo: SA-kuva / Lehtikuva

Mannerheim's long career has been scrutinized since his death in 1951. The analyzes were contradicting and often politically colored. In addition, the Cold War made it difficult to properly assess his life's work. The Soviet Union intervened immediately when the issue of Mannerheim was debated in the Finnish public.

Since the end of the Cold War, however, judgments have been almost unanimous on one point: Mannerheim's brief stint as president, leading Finland from war to peace, was his most significant achievement.

Even his harshest critics readily admit that Mannerheim was the right person for the office at this particular time. It is unlikely that any other Finn would have had more success than Mannerheim.

Mannerheim's life and career have been explored more than any other Finnish figure. Almost 300 books have been published about him in Finland and abroad, and new studies are constantly appearing.

He continues to be the subject of a large number of disputes among historians. Some authors even admire and worship him as a hero and savior of the fatherland. Other books criticize his actions in the civil war or question his abilities as a war leader in the Winter War (1939-1940) and the Continuation War (1941-1944).

Even the common Finns - from one generation to the next - are fascinated by Mannerheim's life. His Helsinki residence has been a popular museum for over 60 years. Mannerheim had an aristocratic lifestyle, and his home says a lot about his colorful life and expeditions.

By Unto Hämäläinen, May 2017
The author is a journalist and specialist in Finland's political history.

Statesman who steered Finland to the European Union
Continue reading 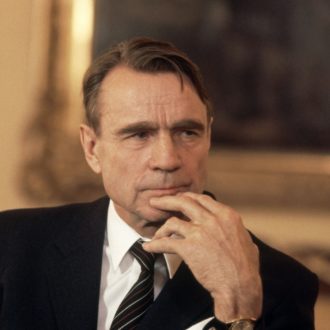 Statesman who steered Finland to the European Union

Mauno Koivisto, Finland's ninth president, was the country's first president to come from the working class. Koivisto was an internationalist who tried to build a peaceful world. 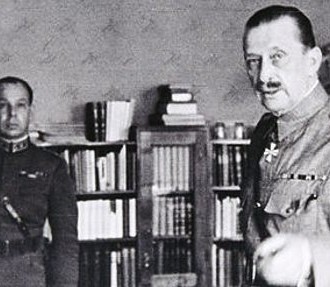 Mannerheim, Finland's legendary military leader, helped his compatriots to achieve “an independent life within the family of free peoples”. 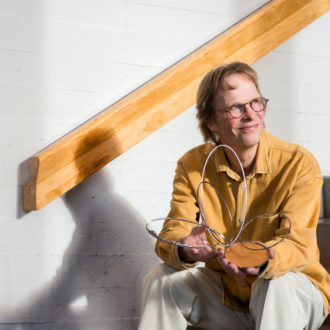 The 2020 Millennium Technology Prize winner will be announced in a live-streamed ceremony on May 18. Following the ceremony, a virtual event will take place online on May 19, the Millennium Innovation Forum. 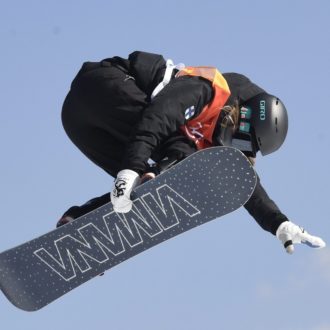 Extraordinary Finnish People to Know (and they are all women)

In honor not only of International Women's Day (March 8th), but all other days of the year, we bring you a list of notable Finnish women from the past and present: artists, sports stars, musicians, politicians, writers and much more.

Finnish rookie shines with goals in the NHL
Continue reading 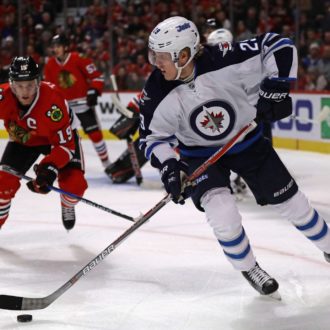 Finnish rookie shines with goals in the NHL

Ice hockey star Patrik Laine, known for tricking goalkeepers with quick, illegible shots, loves playing in North America and is expected to win the Calder Cup, which will be named the best NHL rookie of the year. 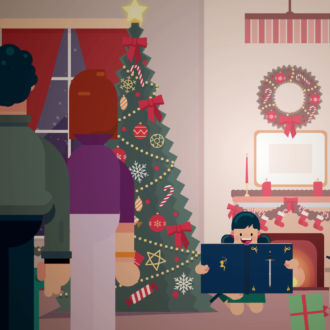 Santa Claus has installed several innovations in the field of artificial intelligence so that the delivery of the gifts does not come to a standstill. As the videos from ThisisFINLAND demonstrate, he still has advice when the machines are helpless.