How did Amazon first advertise

20 years of Amazon: from the garage to the shipping giant 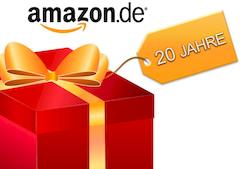 Amazon celebrates its 20th birthday
Image: Amazon, teltarif.de 20 years ago one of the world's largest shipping companies was heralded in a garage in the Seattle area. Amazon started out as a small online bookstore and over the next few years developed into an internationally known online retailer with more than 25 million customers in around 160 countries around the world. The idea for Amazon was born back in 1994 when computer scientist Jeff Bezos, who was just 30 years old, decided to create an online sales platform - initially for books, because the margin was right and they were easy to ship.

Amazon celebrates its 20th birthday
Image: Amazon, teltarif.de Bezos quit his job on Wall Street and set up his "office" for the newly founded online platform in a garage in Seattle. He initially called it Cadabra.com, but later decided on the now-known Amazon - based on the South American Amazon River. Bezos also considered the name Relentless.

About a year later, Amazon launched in July 1995 for a select clientele. Bezos invited around 300 friends and acquaintances to test the new online bookstore. The first book was sold to an external customer on July 16, 1995, and books were delivered to customers in all 50 US states and an additional 45 countries worldwide over the next 30 days. In the second month, Amazon was making about $ 20,000 a week, and in October of the same year, Amazon.com opened to the general public. 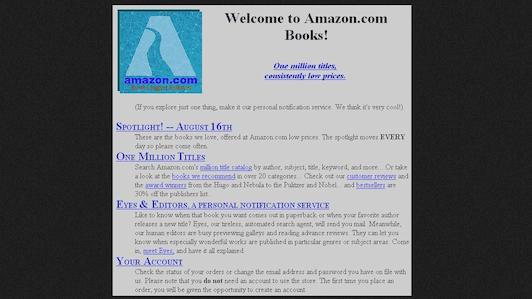 Amazon website launched in 1995
Image: Amazon.com After the successful start, Amazon was able to maintain its successful course. About a year after the first book was sold, the company had sales of $ 15.7 million. In 1997, after successfully going public, the total was increased to $ 147.8 million. Amazon now had enough capital for further expansion. Bezos started building the first international websites in 1998 and making Amazon accessible in more and more markets.

In Germany, Amazon took over ABC-Bücherdienst GmbH, the leading German online bookseller at the time, in April 1998. The takeover cost Amazon a double-digit million amount. The subsidiary Telebook, Inc, which already operated the Telebuch.de website and had branches in Spain, the USA and Namibia, belonged to ABC-Bücherdienst GmbH. About half a year after the purchase - on October 15 - Amazon renamed the Telebuch.de website to Amazon.de. 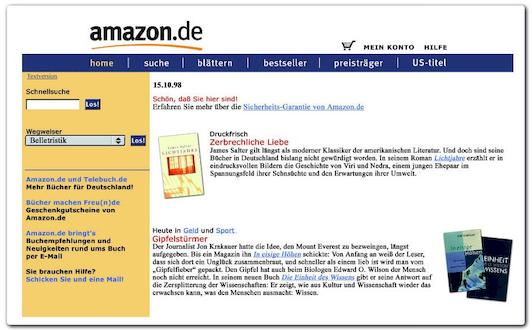 Amazon website for the start of Germany in 1998
Image: Amazon.com In the years to come, Amazon continued to generate sales, but also had enormous expenses. The bursting of the dot-com bubble around the turn of the millennium made the company particularly difficult - Amazon was on the verge of ruin. Stock values ​​fell from $ 100 in 1998 to a low of just $ 6, cash ran out, and investors and creditors became nervous. Bezos was forced to lay off 1,300 people and close a logistics center.

Amazon had to pull itself out of the deep again, but Bezos also had the desire to no longer limit itself to the sale of books. He decided to open the Amazon sales platform to other online retailers - for a fee, of course. The so-called zShops were created, from which Amazon separated again in 2008, as well as the Marketplace, which is still operated today. Opening the sales platform to the competition was a risk, but it paid off: After the downswing at the turn of the millennium, Amazon made profits for the first time in 2002.

Bezos acquired other companies such as the online shoe store Zappos for around $ 850 million, the warehouse automation provider Kiva Systems for $ 775 million, and various competitors in the book and publishing business. Even the Washington Post newspaper bought Bezos in August 2013 for $ 250 million. 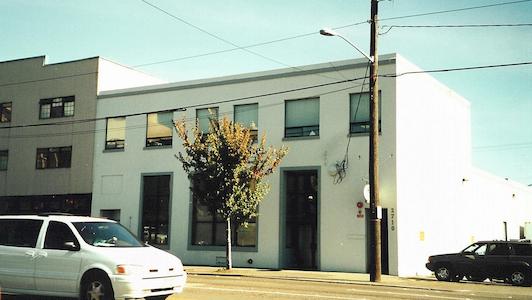 First office building from Amazon
Image: Amazon.com The company developed into an online retailer for a wide variety of products, but was also able to score points with its price transparency. In September 1997 the "1-Click" function was started. In 2007 Amazon introduced the Prime Service, an annual delivery contract at a fixed price. The first savings subscriptions were also sold. The retailer has even founded its own brands: Amazon sells garden furniture under the name Strathwood, Pinzon is the name of the brand for the living area and Denali that for tools. Behind Pike Street, on the other hand, is a cheap brand.

It was also services and offers beyond the sales platform that helped Amazon to become one of the most famous online retailers in the world. The company began lending DVDs to subscribers back in 2005 - the rental business was taken over by Lovefilm in February 2008. In return, Amazon Lovefilms became the largest shareholder - with a 42 percent stake. Three years later, on January 20, 2011, it was announced that Lovefilm would be completely taken over by Amazon. The foundation stone for Amazon Instant Video was laid. In 2006, the start of Amazon Web Services (AWS) followed - the origin of today's Amazon Cloud.

But it was 2007 when Amazon stepped on the gas again. Services such as Amazon Music, Amazon Prime, the Amazon Vine product testers' club and a dedicated payment service were introduced. Also in 2007, the first Kindle brand e-book reader was sold in the USA. It should take until October 2009, however, before the Kindle was also available in Germany - at that time only via Amazon.com. Two years later, the Kindle 3, the first reader available on Amazon.de, came onto the German market. We have summarized the history of Kindle readers in another news item.

The first generation of Kindle for Germany
Image: teltarif.de / Rita Deutschbein The first tablets called Kindle Fire followed, the start of the Amazon app shop and the first Amazon smartphone called Fire Phone. In addition, Amazon is constantly expanding existing services - even if not always to the delight of customers. One example is the Prime service, which no longer only includes the shipping option, but has been expanded to include Amazon Prime Instant Video, BuyVIP advance access and online lending for e-books. Instead of the previous 29 euros per year, Prime now costs 49 euros per year. 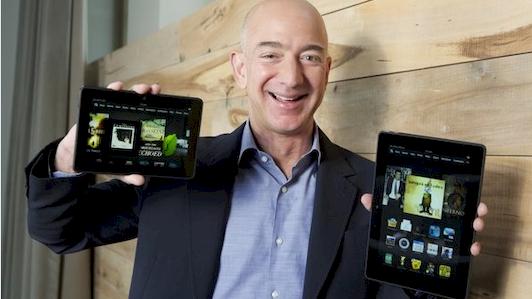 Jeff Bezos shows off Kindle Fire Tablet HDX
Image: dpa Despite all these successes, there are also some shadows hovering over Amazon. Headlines with the keywords temporary work, poor pay, exploitation of employees and warnings made the rounds. After the poor pay of employees was criticized in some logistics centers in the USA, the wave spilled over to Germany in 2013. The Verdi union classified Amazon as a "wage squeezer" and hit the company for the first time.

With false promises, helpers from all over Europe are said to have been lured to Germany, who then - monitored by security guards - had to toil for dumping wages for more than an eight-hour shift without any real breaks.

Aside from the working conditions, Amazon also had to assert itself against the charge of exploiting its market power in the e-book business. With its European headquarters in Luxembourg, various subsidiaries and the alleged redistribution of business assets, Amazon is also said to have managed to bypass the tax authorities by a few billions. 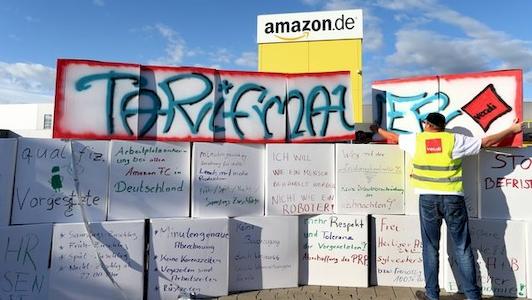 Verdi strikes Amazon in Germany
Image: dpa Despite all the criticism, Amazon has developed into what is probably the largest online retailer with global websites since it was launched 20 years ago. Whether hardware, food, books, clothing or other products - Amazon offers almost everything. In addition, the group manages time and again to draw attention to itself with new innovations. The delivery of goods by drone and delivery times of just one hour are just two of the current examples.

For its 20th birthday, Amazon is celebrating itself with what is known as Prime Day. Today Prime customers have exclusive access to more than 3,000 different items, the price of which is reduced by up to 50 percent, we reported.

If you want to read the history of Amazon in every single detail, you will find a corresponding timeline on Amazon [link removed]. 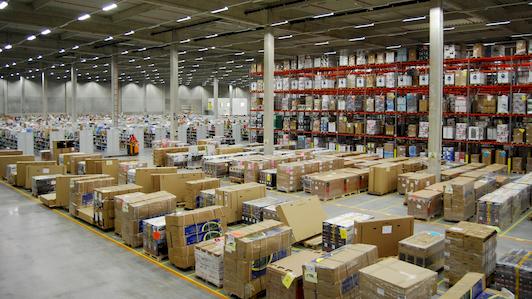