Will we see God when we die?

Someone once said, "Everyone is a thought of God." And God is not forgetful. Every thought that he once thought lasts forever. A relationship that the Eternal God has entered into with a person cannot simply be extinguished. We humans are mortal. But God is immortal and he gives us a share in his immortality. That is why we have hope beyond death.

How the idea of ​​the afterlife arises

Jesus preceded us. It wasn't always that clear. In ancient Israel, the idea was that a person has his time on earth, and after that it is over. In the 115th Psalm it says, for example: "The dead will not praise you, Lord, no one who descends into silence", and in the 88th Psalm: "I am hauled away to the dead like those who are slain who rest in the grave; you don't think about them anymore, because they are out of your hand. " Job asks, "Do you think a dead person will live again?" and says: "Now I will lie down in the ground, and if you (God) look for me, I am no longer there!"

Only shortly before the birth of Jesus does the idea of ​​an eternal life arise in the people of Israel. Jesus refers to it. For Jesus it is clear: "God will raise the dead on the last day. He will judge them, and those who stand in judgment will come in for the joy of their Lord," as it is said.

What this joy looks like, however, is something that Jesus does not particularly paint. However, in his parables he repeatedly speaks of the feast and especially of the wedding feast. And in Revelation there is the wonderful word:

The afterlife in the New Testament

So the New Testament tells us not to be afraid of death. On the contrary: we can look forward to what awaits us. The New Testament also tells us why we can look forward to this feast after our death. Jesus was crucified and died, but God raised him. And so he became the "first fruits of those who fell asleep". All who hold on to him follow him from death into life; he carries her with him, wakes her up from death and lets her share in eternal life.

The Bible does not say much more about the afterlife, the afterlife. But I think that's enough. The most important thing is: after our death we do not fall into a nameless nothing. Jesus is waiting for us. He preceded us, made quarters for us (John 14: 2-3), and it will be a great, beautiful, lavish, endless festival. The tears are wiped away, diseases are cured, guilt is forgiven. Everyone can make a new beginning with everyone.

New beginning in the afterlife

And there has to be a new beginning. Because: Even if I firmly trust that God accepts me and does not reject me for the sake of Jesus Christ, I think: The way I am, I do not fit into heaven, the place of purity. I am so unhealthy that I don't fit where everything is intact.

I think God still has to straighten me out so that I can really rejoice with all the others and celebrate with them, including those I can't stand here and now, who I can't understand and accept, who are so completely different are than I am.

The judgment of God

I think of it that way, to use an image: I'm like a rusty, crooked nail. If the craftsman wants to use it, he has to knock it straight with a hammer, maybe even hold it in the forge, then he straighten it, and then he can use it, can install it. He will not blame the nail for being so crooked and rusty, and he will not throw it away, but he must first straighten it, that is: straighten it, bend it, make it usable. Just like I take a broken watch to a watchmaker to fix.

This is how I imagine God's judgment that awaits those whom he accepts. With another picture: God shows me the connections, the effects of my words and deeds. It hurts when I see the connections. When I feel and see how much suffering has come into the world through me, and when I have to look again at my own wounds and injuries to understand how it came about in order to be healed. But then it's good, the pain goes away, the wounds heal, and I can celebrate.

Concept of the afterlife: opium for the people?

Such images can comfort us when we think about our death or when a person dies who is close to us. Unfortunately, these images were also repeatedly misused to put people off, to calm them down. Unfortunately, the churches have all too often played the bad game of keeping the people here on earth in oppression, dependency and poverty and putting them off:

"Yes, the earth is a valley of tears, but if you are well-behaved and decent and patiently endure everything, then you will be rewarded in heaven."

Such sentences are bad when they come from the mouths of the rich and powerful, who in this way protect their wealth and power, what has occurred and in some cases still occurs, for example in Latin America. Karl Marx rightly called this kind of cheap consolation, consolation for a better afterlife, "opium for the people": a method to numb pain and calm the poor. But Jesus did not preach an individualistic religion of salvation with the tenor:

"Be pretty, decent and humble, then you will get a nice balance in heaven."

The first chapter of Mark's Gospel summarizes what Jesus preached:

"The time is now. The kingdom of God is just around the corner. Change your mindset and believe in this good news."

What does the Bible say about the hereafter?

The question: "Is there an afterlife?" can therefore be answered unequivocally from the Bible: Yes, there is an afterlife. God will raise us up after our death and give us a new and eternal life. It is certain. But it's not the main thing in our beliefs. I imagine it more like a background, or better still, like a foundation on which life as a Christian in the here and now is built.

At some point, when we die, we will meet him again, and we will see him for who he is. And he will see us for who we are. We can trust that. This hope, this certainty, should not obstruct our view of the life here and now, of the joy, of the need of our fellow human beings. The certainty that my life will not be extinguished by death can and will give me strength for this life before death.

"I'm going to speak up," writes Ms. I., "because the terrorist attack on Whitsunday in London totally wrecked me. But, what do I say, London? Manchester was the name a few weeks ago. Before that was Egypt, before that Paris, before that Berlin and and and ..."
Last year she accompanied her husband Helmut, the well-known Munich director, to her death. Why dying also has positive sides, what memories she carries with her every day and what faith gives her - Tamara Dietl talked to us exclusively about this. 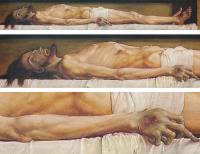 No one else has ever painted the dead Christ as ruthlessly as Hans Holbein the Younger. His Christ is decaying before our eyes. He is completely human because he is completely dead. In the picture, however, you can see a detail that does not only allow pop culture connections.
<?