How does irrigation affect the water supply? 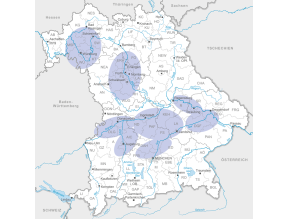 Climate change also has a direct impact on sustainable water resources in Bavaria. Since 2003, the formation of new groundwater in Bavaria has decreased, in some cases considerably, while evaporation has increased. In dry summers such as 2015, 2018 or 2019 there is a lack of precipitation for plant growth. These effects of climate change contrast with an increasing desire for irrigation. It is crucial to manage the water resources in Bavaria sustainably and to maintain them in the long term.

A need for irrigation of agricultural and horticultural crops arises mostly in times of longer than average dry periods or for regions in which generally unfavorable meteorological conditions (low rainfall) lead to an insufficient supply of the crops. The different water storage properties of the soil also play a role here. Furthermore, the need for irrigation of green areas and sports fields in dry seasons should not be neglected. 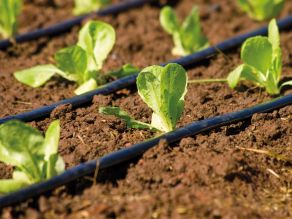 In addition to the meteorological and pedological input conditions, it is above all the crops themselves that create the need for additional irrigation through their specific water requirements. The irrigated regions are therefore not necessarily arid areas. In agricultural and horticultural production, water is mainly used to irrigate vegetables, root crops, fruit, vines and hops. The securing of yields and quality through irrigation measures is becoming more and more important. In addition, the number of irrigated crops is increasing.

In order to keep the demand as low as possible, water-saving irrigation methods such as drip irrigation are to be used. In order to minimize evaporation losses, irrigation should take place in the morning and evening (see "Further information").

From a water management point of view, the construction of new irrigation systems should primarily aim at a supply of stored water from surface waters, which was withdrawn when there was sufficiently high runoff, or from precipitation. Storage from surface water is particularly useful in times of high runoff for later use in times of need. If this is not possible, a supply from bank filtrate should first be checked. If this option is also ruled out, for example due to the distance to the body of water, the irrigation requirement can be met from the near-surface groundwater. When using groundwater, however, higher-value purposes, especially the drinking water supply, always have priority.

If the local water supply is limited, an association of interested agricultural or horticultural businesses to set up joint water extraction, water storage and distribution systems offers the best conditions for sustainable use and avoids conflicts of interest.

Rivers and lakes are the habitat of numerous plants and animals. In particular, the animals living in the water, but also aquatic plants have special requirements in terms of properties, such as water temperature, oxygen and nutrient content, and the amount of runoff or the water level. If water is withdrawn from water bodies, this has a direct effect on the state of the water bodies.

Withdrawal of water from rivers and lakes is only possible if there is a sufficiently high runoff in rivers or water levels in still waters and the community is not permanently damaged. Not all bodies of water are therefore suitable for drawing water. Maintaining an ecological minimum water flow in rivers and a minimum water level in lakes is imperative in order to ensure a good ecological status of the waters. As a result of climatic changes, smaller bodies of water in particular lead more and more often to low water in dry and hot summer months or to dry out themselves. The desired irrigation requirements can then often not be met from such waters. Withdrawal of water from rivers in times of sufficient discharge to fill storage basins and provision for irrigation in times of low discharge are therefore the preferred concept for the future.

However, potential influences on the waters through other uses, such as sewage treatment plant drains or industrial water withdrawals, must also be taken into account when planning further withdrawals. Water abstraction from surface waters always requires a permit under water law as soon as pumps are used. If water is withdrawn with hand scoops such as buckets or watering cans, it falls under public use. No water law permit is required for this. The withdrawal of water from bodies of water by the respective owner or from adjacent properties is also permit-free for their own needs (owner and resident use). Withdrawal of water is generally only permitted if it does not impair other animals, plants or their aquatic habitats and if the water quality is not adversely affected (cf. § 26 WHG).

Water abstraction from the groundwater

Groundwater abstraction for irrigation purposes does not require a permit, provided that it is done in small quantities and provided that there are no negative effects on the quality of the groundwater or future uses.

A permit-free use is concerned with the pumping of groundwater in small quantities from the first unconstrained groundwater storey for purposes of agriculture, forestry and horticulture to maintain soil fertility, if the drilling is carried out without drilling aids (e.g. flushing additives), no cement sealing in the groundwater area is brought in and is only expanded with building materials approved by the building authorities.

Withdrawals requiring a permit are to be assessed according to the principles of sustainable management of the available resources within the framework of the water law procedure.

Use of groundwater always requires a permit under water law, especially if:

In the case of groundwater withdrawals that require a permit, the creation of the borehole is to be regarded as a mandatory intermediate step and is therefore included in the water law permit for the use of groundwater. For the extraction of groundwater, an application under water law must be submitted to the district administrative authority before the start of drilling, which also counts as a drilling notification and in which the hydrogeological conditions and the planned execution of the drilling with the materials used must also be shown. This procedure is only possible if the hydrogeological conditions are well known (geological structure, possible production rates). If this is not the case, the borehole must first be reported or applied for under water law and the extraction applied later after the necessary knowledge is available.

In the case of building measures for irrigation that require a permit, building acceptance during construction is usually required, as this is the only way to assess building conditions that are no longer visible later. The determined drilling and pumping test results, together with the drilling profile and the expansion plan, are to be reported to the district administration by a private expert in water management.

In water protection areas and mineral spring protection areas, drilling is generally prohibited. An exemption from the prohibitions of the Protected Area Ordinance can be examined upon application. This application must be submitted to the district administrative authority. 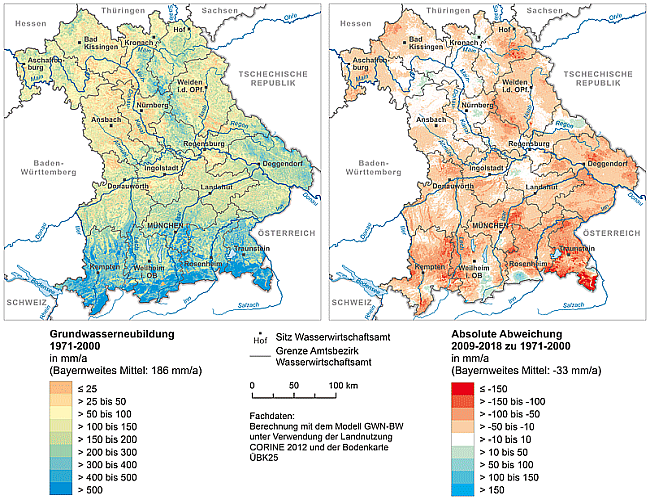 The hot dry years of 2015, 2018 and 2019 show that climate change is having a noticeable effect in Bavaria with lower rainfall and rising temperatures. Climate-related changes in the water balance also have a significant impact on the formation of new groundwater. Below-average rates of new growth have been registered since 2003. For example, the Bavaria-wide mean new groundwater formation in the time series from 2003 to 2018 decreased by around 15% - that is considerably - compared to the long-term mean from 1971 to 2000. Due to the heterogeneity of the natural influencing factors, this decrease was even more pronounced regionally in recent years. In parts of southern Bavaria, the new formation rate was around a quarter below the long-term average. Other regions of Bavaria, e.g. in the administrative district of Lower Franconia, have always been characterized by comparatively low rates of new education. Here, the decreasing new groundwater formation rates recently exacerbated the situation. As a result, the groundwater levels throughout Bavaria have been at a persistently low to very low level for several years.

Framework conditions for the assessment

Climate-related areas of water shortage and aquifers with low storage capacity as well as a high usage pressure from groundwater abstraction can lead to bottlenecks in the water supply. When assessing irrigation applications by the water management authorities as official experts in water law proceedings, the increasing drought must therefore be taken into account and the water availability must be taken into account in discretionary decisions in terms of quantity and quality. This has already led to moratoriums on irrigation withdrawals.

The Bavarian State Office for the Environment has reacted to the increasing drought. As one of the numerous components of the Irrigation Action Plan of the Bavarian State Government, the assessment specifications to be applied throughout Bavaria for the abstraction of irrigation from surface waters and groundwater were revised for the official expert in 2019. The main content is the use of water meters or a standard 5-year term of the water law permit for withdrawal notices as well as time-of-day restrictions for sprinkling techniques that are prone to evaporation. These framework conditions ensure that enforcement is as uniform as possible in Bavaria. The official expert (locally responsible water management office) determines the framework conditions on the basis of the local situation in each specific case.

Water uses can only be permitted under water law after the management discretion of the responsible district administrative authorities. As a result, sustainable water resource management, economical use of the usable water supply and preservation of the good status in the sense of the Water Framework Directive can be guaranteed.

An evaluation of the assessment specifications is planned for the year 2021 by the State Office for the Environment. The e-mail function mailbox for Irrigation has been set up for suggestions.

The forms are to be used for planned use of groundwater for irrigation and submitted to the district administrative authority. They make it easier to compile all the necessary information and keep the administrative effort low for everyone involved.