Where does normal milk come from?

All about milk: production, processing and offers

Milk as part of a balanced diet

Milk is a good source of calcium: 100 ml contain 120 mg calcium, which our body can easily absorb from milk. Calcium is important for bones, teeth, nerves and muscles.

A large glass of milk (250 ml) already provides 38% of the daily calcium requirement of an adult. It does not matter whether it is whole milk or low-fat milk, fresh milk or long-life milk. Milk and dairy products also provide valuable protein, B vitamins and iodine. They are therefore important building blocks for a varied and balanced diet and should be on the menu every day.

The German Nutrition Society (DGE) recommends for adults 200 to 250 ml of low-fat milk and 2 slices (50 to 60 g) of cheese daily. The milk can also be completely or partially replaced by other milk products such as yoghurt or buttermilk.

What to do if you are lactose intolerant?

People with lactose intolerance can use lactose-free milk. There are also different types of lactose-free milk. The only difference to conventional milk is that the natural milk sugar lactose is broken down into its components glucose and galactose during production. The remaining lactose content is then less than 0.1%. By breaking down the lactose, people who are lactose intolerant can also drink this milk without discomfort.

For everyone else, lactose-free milk has no health benefits whatsoever.

What types of milk are there?

You can find a large number of different types of milk on the supermarket shelf. There are differences in the type of heating, production and fat content.

The milk can be kept by heating it up

In order to kill naturally contained germs and to make the milk safe and durable, it is heated. Depending on the temperature and duration of the heating, one speaks of pasteurization or ultra high temperature heating. The different processes influence the shelf life and also the taste of the end product. 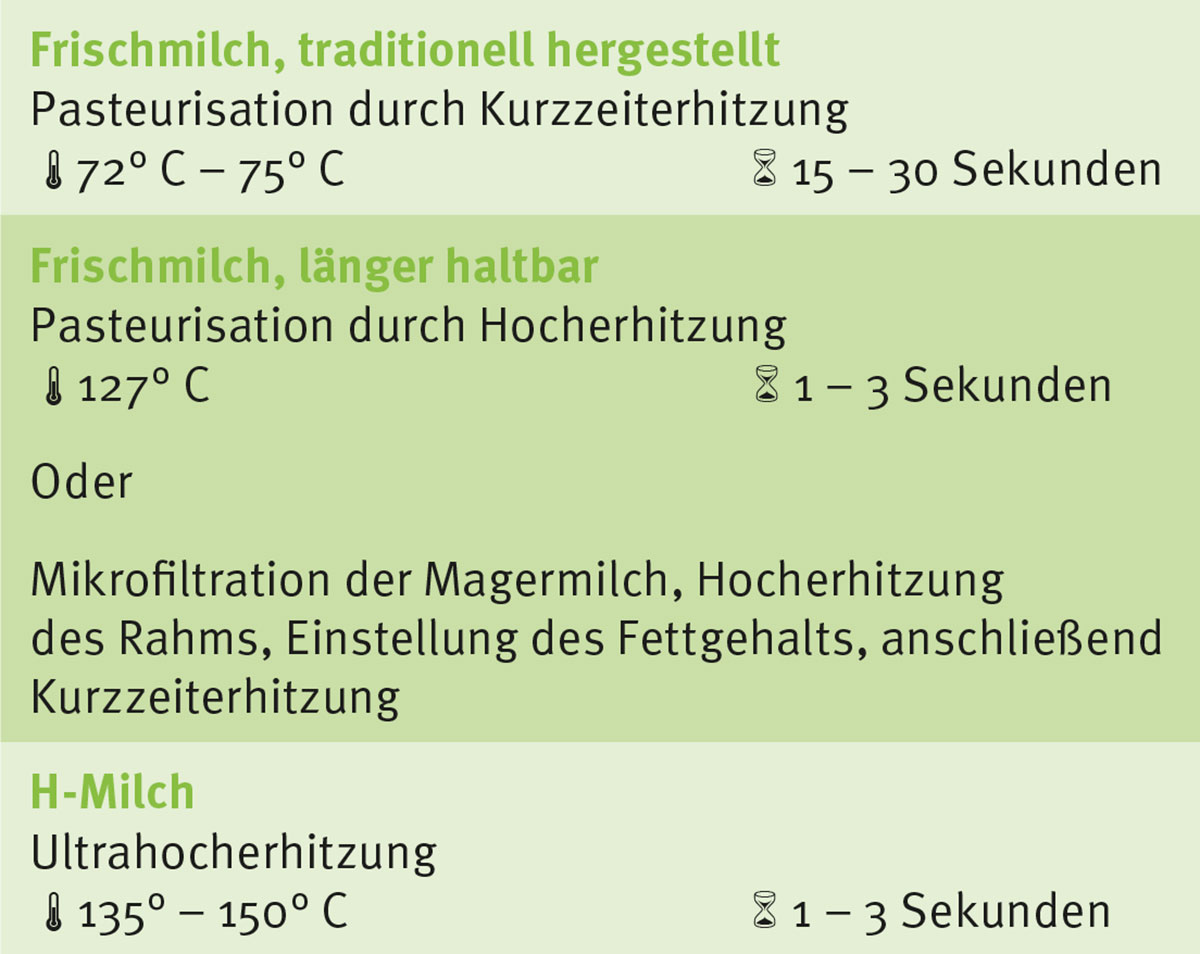 Only the labeling "pasteurized" or "ultra high temperature" is mandatory. The terms "traditionally produced" or "more durable" are based on a voluntary commitment by the industry. The specification of the high heating or microfiltration processes was not regulated. However, some providers mark these on a voluntary basis.

Traditionally produced fresh milk that has a longer shelf life must be refrigerated. Long-life milk can be stored unopened for months without refrigeration.

After opening, each is milk Can be kept in the refrigerator for about three to four days.

Often several types of milk are offered by the same brand. For whole milk, low-fat milk and skimmed milk, the fat contents are specified:

Milk with a different fat content is called "drinking milk". The fat content must be clearly recognizable and easy to read with one decimal place. It is decisive for the energy content (calorific value), but also influences taste and mouthfeel. 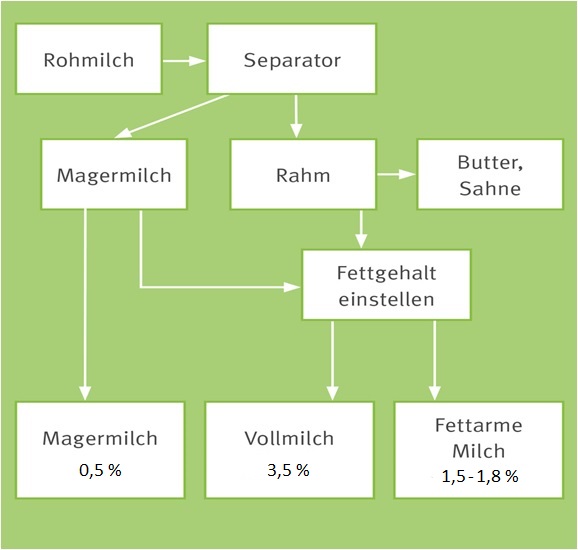 The milk fat is in the form of droplets. After a short time, the differently sized droplets settle on the surface of the milk as a layer of cream. To prevent this, the milk is pressed through fine nozzles under high pressure during homogenization. This reduces the size of the droplets and distributes them evenly so that they no longer "frame". At the same time, the milk is easier to digest.

Only traditionally produced fresh milk is also offered "not homogenized" or "partially homogenized". The latter means that only the cream of the milk was homogenized, but not the skimmed milk part. The information on homogenization is voluntary.

How do I know where the milk is coming from?

There is currently no obligation to indicate the origin of milk. There is no need to identify where the milk is produced or where it was processed. If you want to buy regional products, you can use the regional window or the quality mark of the federal states, such as the Baden-Württemberg quality mark. The location of the dairy can also provide an indication, but does not say anything about where the milk was milked. 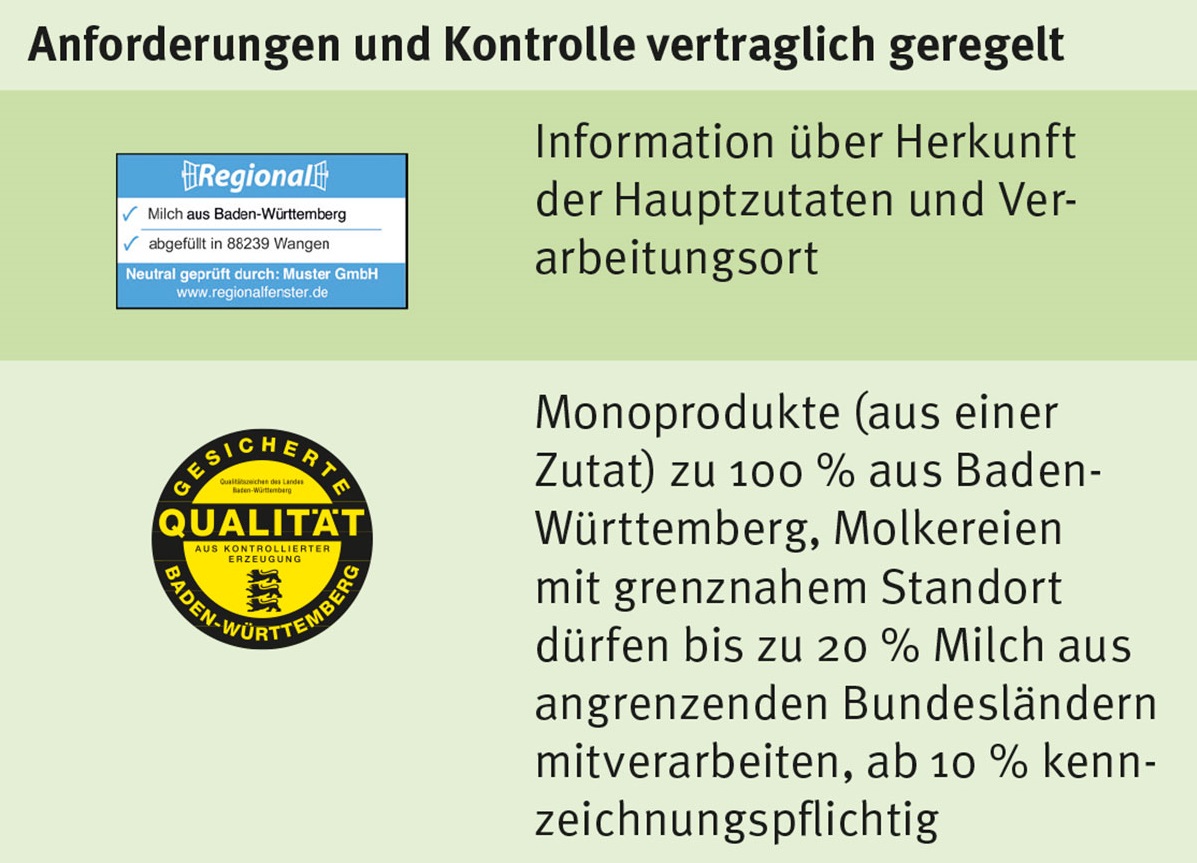 Like all food of animal origin, milk must also bear an identity label. It is not intended for information for end consumers, but is intended for official food control. The symbol indicates in which facility the food was last processed or packaged, in the case of milk it is usually the dairy. This must be approved and monitored and work in accordance with the applicable hygiene standards. The identity label says nothing about the origin of the raw materials.

* The list of company numbers in Germany is available online.

What is different with organic milk?

For conventional milk there are no special legal requirements for the keeping conditions and feeding of the dairy cows. The general regulations on animal welfare and the keeping of farm animals apply. The feeding of genetically modified feed is allowed. In a test purchase in the Hessian retail trade in 2019, the nutrition experts from the Hessen Consumer Center found melodious terms or seals with which the providers advertise traditional husbandry, natural feed or more animal welfare. For many products, however, it was not possible to identify which of these promises are actually based on clear standards. It became difficult, for example, with the term "country" - for some manufacturers it was probably a mere advertising ploy.

In the case of organic milk, the EC organic regulation stipulates specific minimum requirements for animal husbandry: for example, 6 square meters of stable space per animal and 4.5 square meters of outdoor space, preferably pasture land, and 60% roughage in the daily ration (e.g. hay, grass, silage). The use of genetic engineering is prohibited. Regular checks are carried out to ensure that the requirements are met. Organic products are compulsorily labeled with the EU organic seal, on which stars form a leaf. Manufacturers may also use the German hexagonal organic seal.

What is behind hay milk, pasture milk and Co.?

Hay dairy farming is a traditional form of milk production. The main difference to the usual conventional dairy farming is that the dairy cows do not receive any fermentation feed (silage). In summer, hay milk cows are given mainly fresh grass, legumes and herbs. In winter the cows are mainly fed with hay. This has a positive effect on the taste of the milk and its suitability for making hard cheese.

The designation "hay milk" has been protected throughout the EU as a "guaranteed traditional specialty" (g.t.S.) since 2016. There are numerous individual regulations, mainly for feeding the dairy cows. In addition to fermented feed, genetically modified feed is prohibited. Producers must adhere to binding standards and also submit to a control system. 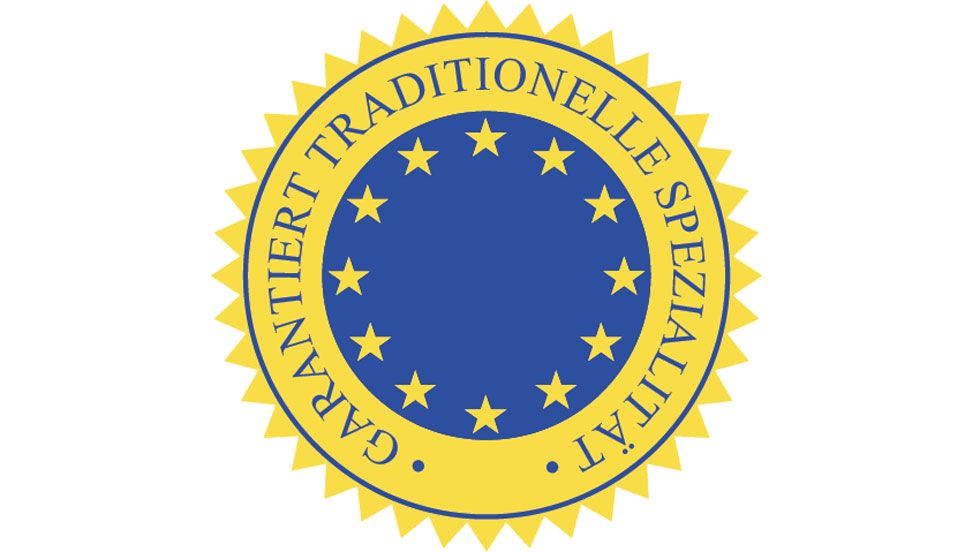 Pasture milk is not identical to hay milk. In contrast to hay milk - with the focus on feeding - with pasture milk, animal husbandry is in the foreground: grazing. Another difference: the term "pasture milk" is not regulated by law. So the definition lies with the dairies or the food trade. Consumers are not always clearly informed of the exact designation. In addition to the grass from the pasture, the cows also receive feed such as silage and concentrated feed. The main feeding usually takes place in the stable.

The name alpine milk is not protected, but primarily an advertising term. This means that every manufacturer defines their own individual criteria for Alpine milk: for some, it is sufficient if the cows' stall is somewhere south of the Danube, while others have stricter requirements for the region. There are no special rules on feeding or animal welfare standards for keeping dairy cows.

What does the label "Ohne Gentechnik" mean?

The requirements behind the label "Ohne Gentechnik" are legally regulated by the EC Genetic Engineering Act. There is no guarantee of GMO-free feeding from the birth of the animals, but only within certain deadlines. Milk with the label "Ohne Gentechnik" can come from cows that were raised on genetically modified feed until they were two years old. Thereafter, feeding with genetically modified feed is prohibited.