Guitar and music theory, U. Meyer

Pentatonic scales, as the name suggests ("penta" is the Greek word for five), consist of five instead of the usual seven tones, and they contain no semitone steps, only whole steps and minor thirds. They play a special role in textbooks for electric guitar, and we will deal with them elsewhere. 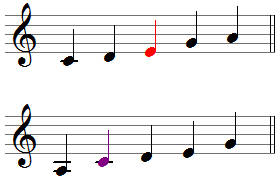 A distinction is made between two pentatonic scales, a major and a minor pentatonic. This can be quickly illustrated with a few notes:

The upper scale consists of five notes of the C major scale. The major third "e" makes us perceive it as "major", although the fourth and seventh degrees of the major scale do not occur.

The lower scale consists of the notes of the A minor scale. Levels 2 and 6 are missing here. The minor third a - c ensures that we assign it to the minor key.

One could do moreAccept "inversions" of the pentatonic scale as independent, but they would have compared to those on c and a"Disadvantage": while the third and fifth of the root note are present in the two scales shown, i.e. one has a ladder-specific chord of the first degree, they are missing

Pentatonic on the black keys.

Perhaps their most distinctive feature is that pentatonic scalesno semitones contain! That leaves them weirdfloating sound. Unlike major or minor scales"strive" they don't go anywhere so purposefully.

You can turn it around without feeling like you have been transported to another world. If you play a C major scale from f to f, you immediately think "Holla, that sounds strange!"; while, lost in a dream, one can improvise pentatonic without great irritation, for example on the black keys of a piano, which also represent a pentatonic scale.

The pentatonic scale's peculiar tension-free state of suspension also serves as the framework for many of the simplest traditional children's songs such as "Backe bake Kuchen", and you can play a pentatonic recorder without ever sounding wrong.
Nevertheless, one can definitely make mistakes in the notation or in the accompaniment.

Pentatonic is considered to be the oldest recorded tone system, which is derived from bone flutes with three to four finger holes that are thousands of years old.

The peculiarity that one never really offends with a pentatonic scale is a great help when getting started with improvisation in blues, jazz and rock. While in the blues, for example, the accompaniment is usually played with major or D7 chords, the soloist improvises using the pentatonic minor scale. That sounds good most of the time, and sometimes characteristic dissonances arise that this music needs - in this respect you (almost) always play correctly. And if it sounds really wrong, you go one step further and you are saved!