Does the iPad have inductive charging?

In the test: The Logitech Base charges your iPad Pro wirelessly - and the Apple Pencil at the same time

You can almost only charge your Apple Watch wirelessly, as the magnetic cable is only "attached" to the back. Or you put them on a charging station. What about the iPhone? Do you also charge it wirelessly by placing it on a Qi charging pad? Me, yes. But what about the iPad? Do you still plug in the Lightning cable for charging here? Not me. Logitech has something ready for this for the iPad. 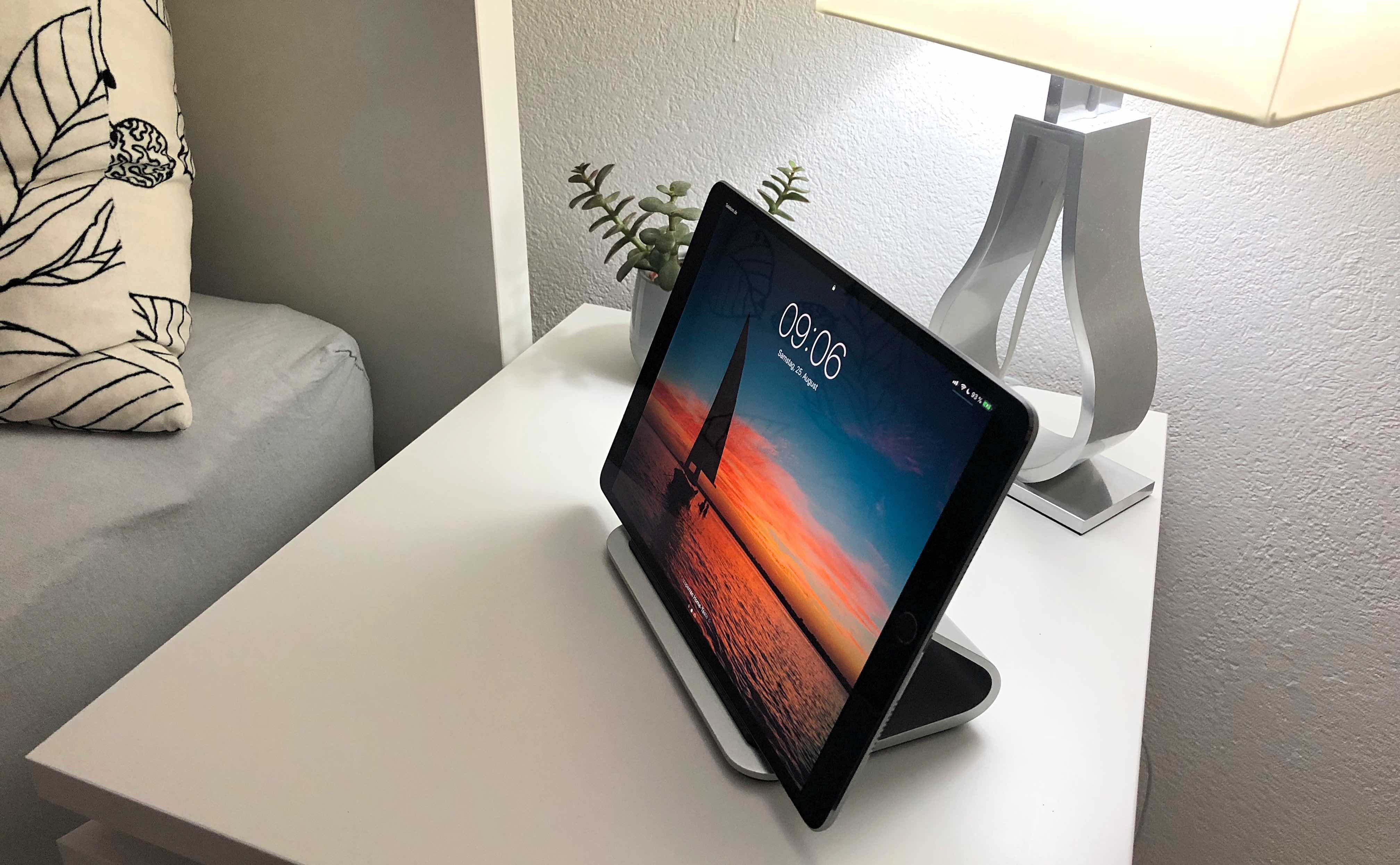 Design from Logitech that looks simple

I have been using an iPad Pro for more than 2 years. What was previously the 9.7 ″ device is now the 10.5 ″ device. The iPad Pro has a separate connection on the side of the device - the Smart Connector. The Smart Keyboard can be attached over it, which means you have a physical keyboard on the iPad. But what very few people know is that the device can also be charged via this connection. 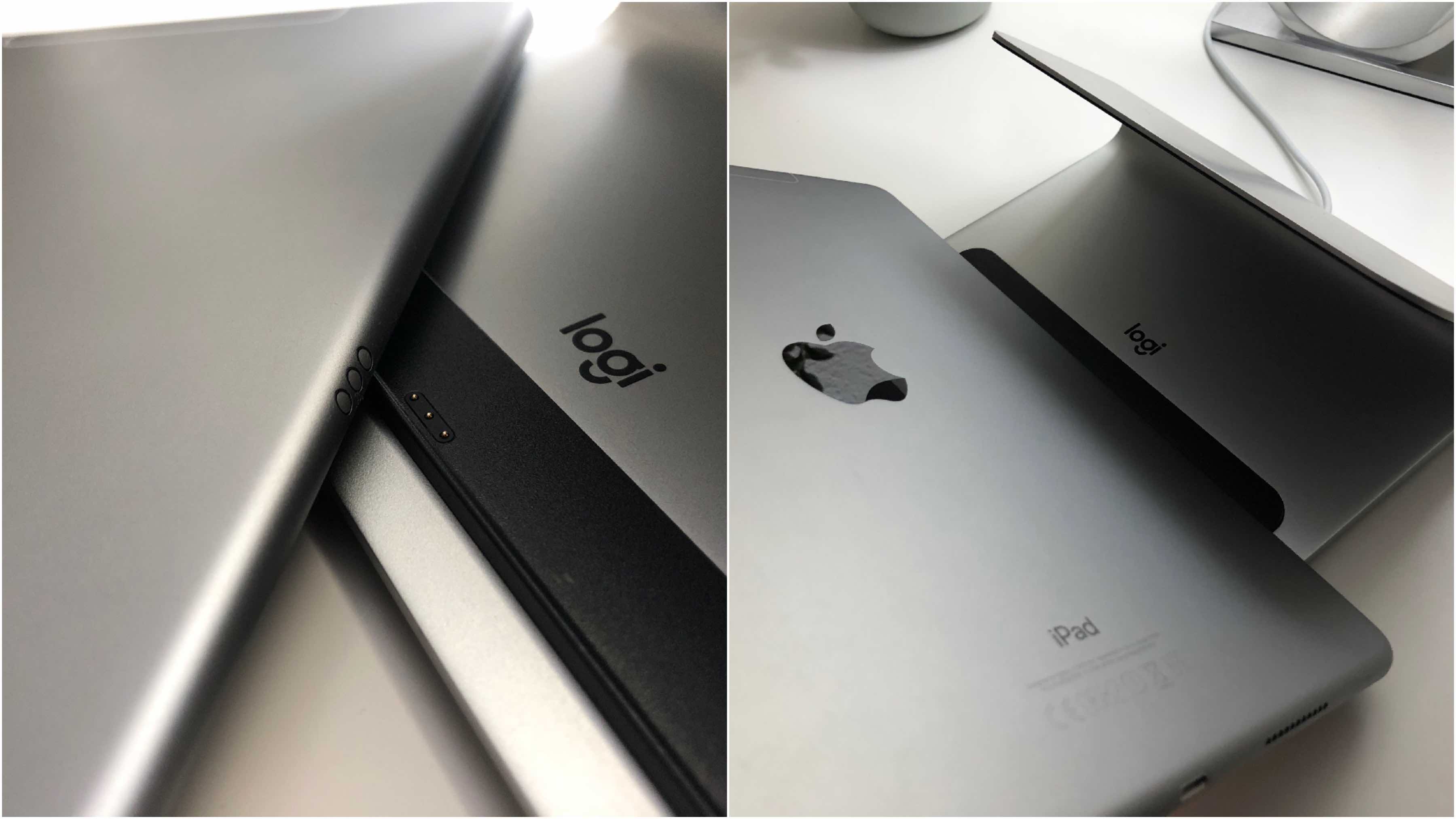 I've really been doing this with the iPad Pro right from the start and I really like the way it charges. The Smart Connector sits on the right edge of the device on all iPad Pro models. It is defined by three circular and slightly recessed points. Electricity only flows when all three points are connected to the opposing pool - away from the iPad or towards the iPad. This makes it possible to supply power to peripherals, but also to charge the iPad itself.

With the Logitech Base you can charge the iPad while it is standing and without even having to pick up a cable and plug it in. It's easy, quick and safe.

After the power supply comes the installation. The underside of the Logitech Base is rubberized and therefore adheres to the surface through a kind of adhesive attraction. The rubber coating and the subsurface should be free of dust. Then simply set up the Logitech Base and press down a little. The rubber coating prevents the charging dock from sliding sideways, but most importantly, it stops when you pull the iPad down or away from the dock from above after charging. In the now 2 years, the dock has always remained safe and secure for me, which makes daily use very continuous and satisfactory. 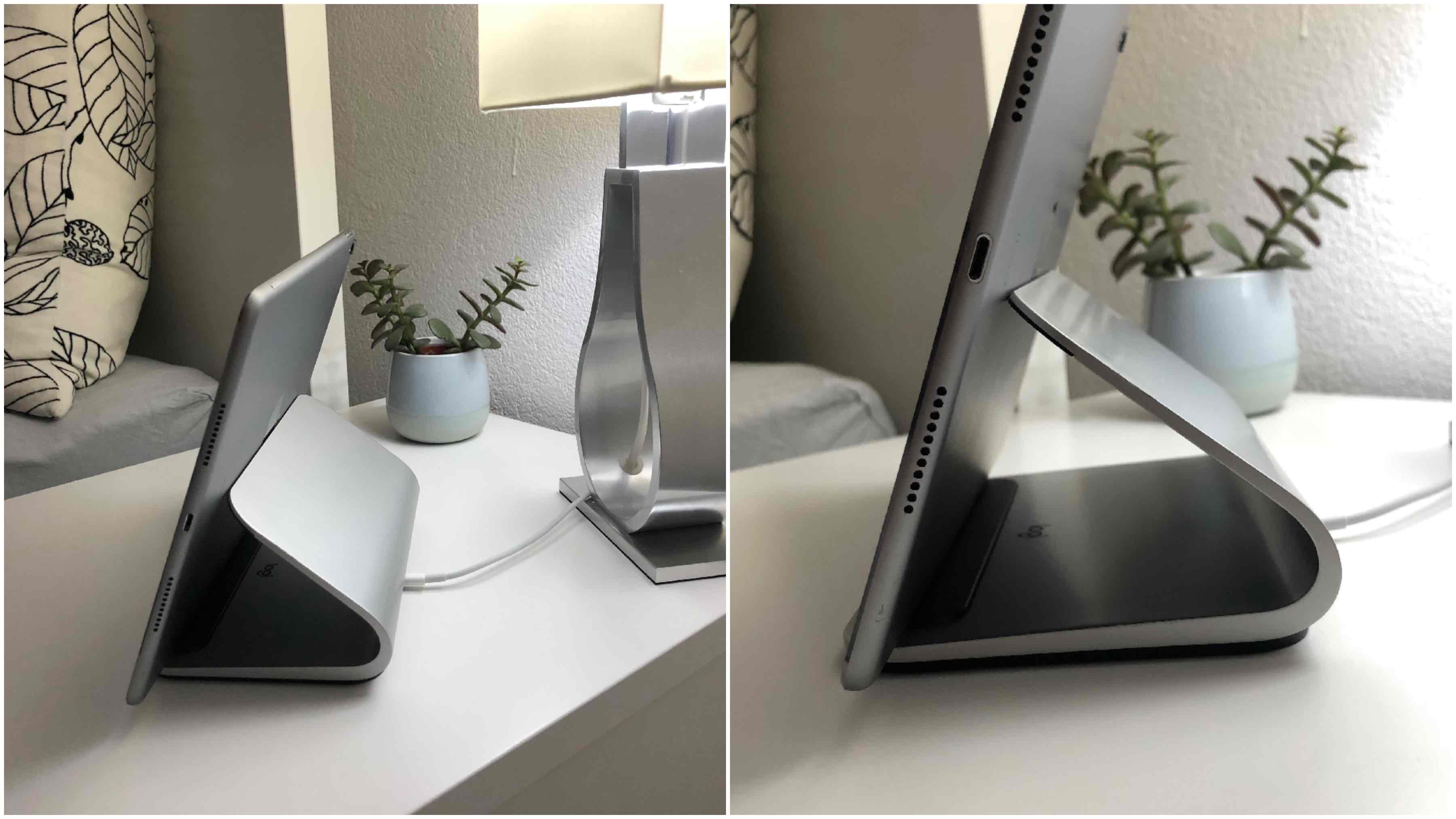 For charging, the iPad is simply placed correctly on the lower edge of the Logitech Base. A magnet always pulls the iPad correctly onto the three pins in the dock. The tablet is simply leaned against and held on the back. In this way, the iPad can be charged but also used to watch videos and the like at the same time. The best way to take the iPad down after charging is to pull it forwards away from the holder on the back and then pull it up. It is set up exactly the other way around and you only need one hand and a handle for both. 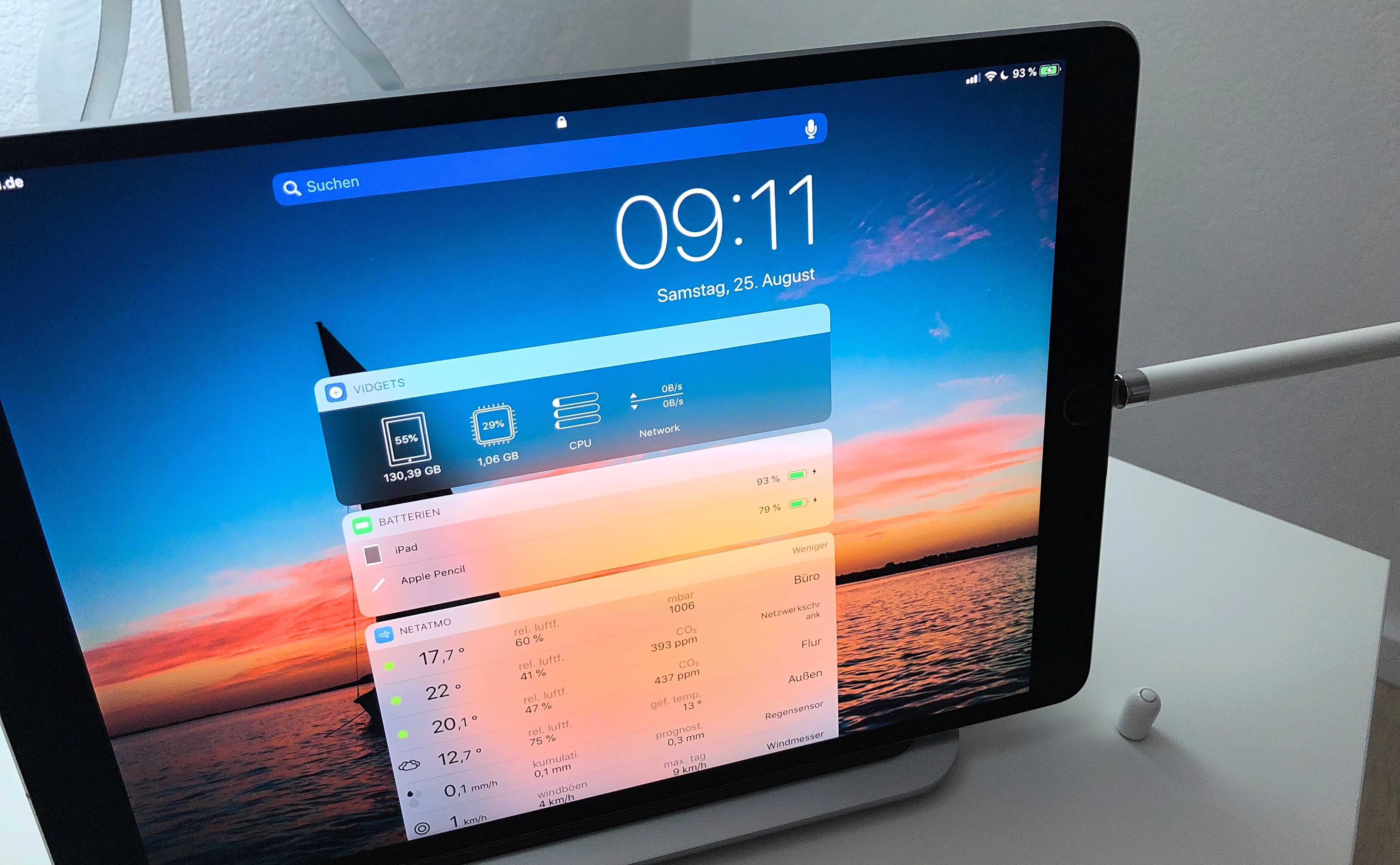 So the iPad fits optically everywhere

If you use the iPad Pro and Apple Pencil every day, then you are in luck with this charging accessory. You can load both at the same time. So just put your iPad on the dock and then plug the Apple Pencil into the Lightning connector on the iPad. The pen draws power from the iPad for charging and the iPad receives power from the charging dock via the Smart Connector. Clever, right? No more cables. It just looks clean and tidy. At the same time, after a while, you will have both devices charged and ready for the next use. 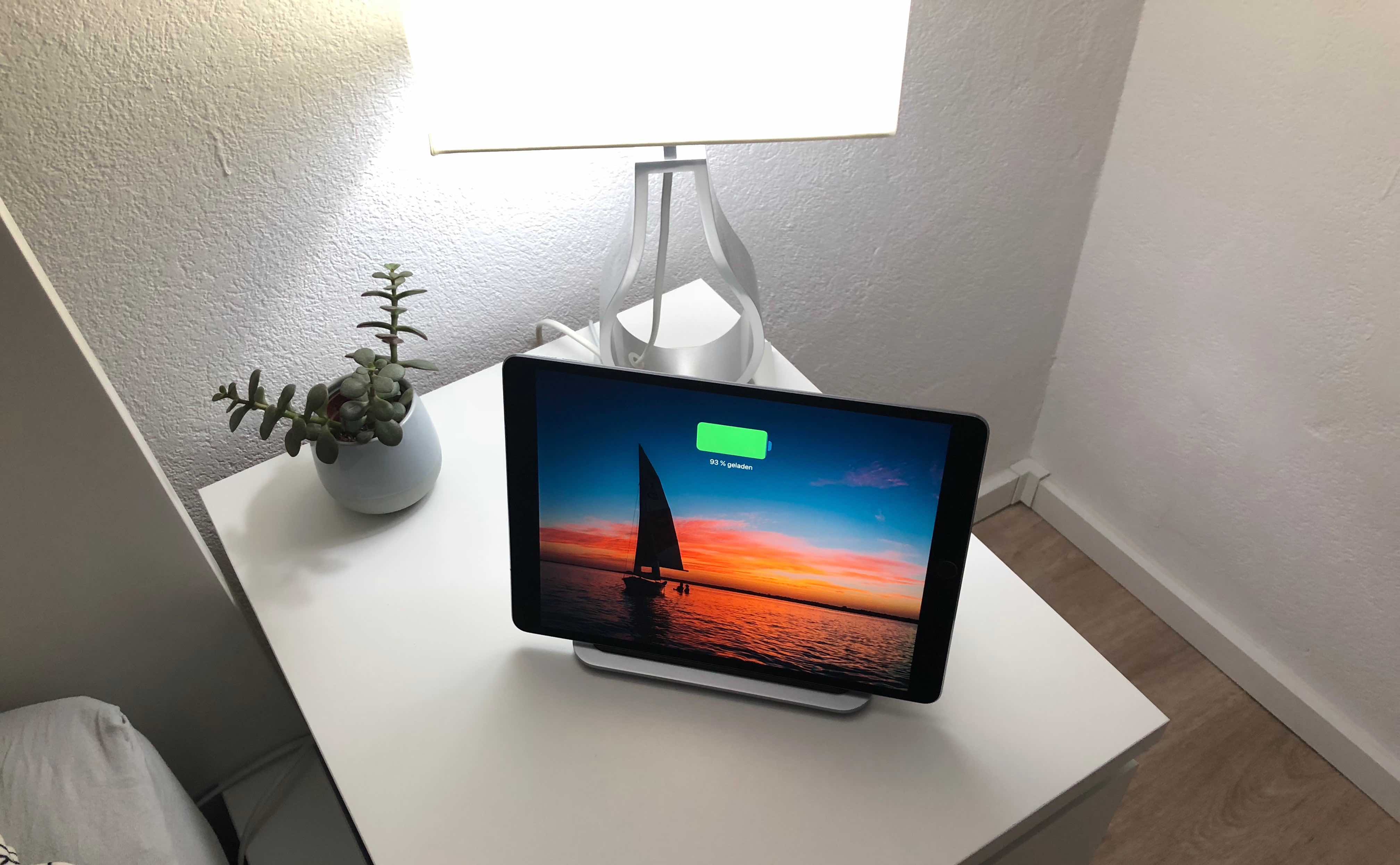 For me, the Logitech Base is such a must-have in everyday life. You only appreciate it when it is not there - for example when traveling. Of course, you could also take it with you if you wanted to. I put my iPad on the dock every evening and charge it completely overnight. The loading times are slow but constant. Compared to fast charging, however, this charging option is very slow. This does not matter overnight, however, because the iPad is fully charged again after about 7 hours of sleep.

The entire Logitech base is made of aluminum and communicates with Apple's design language thanks to its simple design. It is simply integrated into the field of vision without any frills and thus always finds a suitable place on a bedside table, a sideboard or in the kitchen. Would you also like to charge your iPhone wirelessly? Then take a look here (⇒LINK).

Did you like this article? Then I would be very happy to receive support via PayPal.