How would you convert Ethanal

Enzymes show the way: They are able to produce complex molecules in multi-step reactions. An international group of researchers took advantage of this functionality. The result: With the help of nanoparticles, it was able to convert carbon dioxide into raw materials such as ethanol. 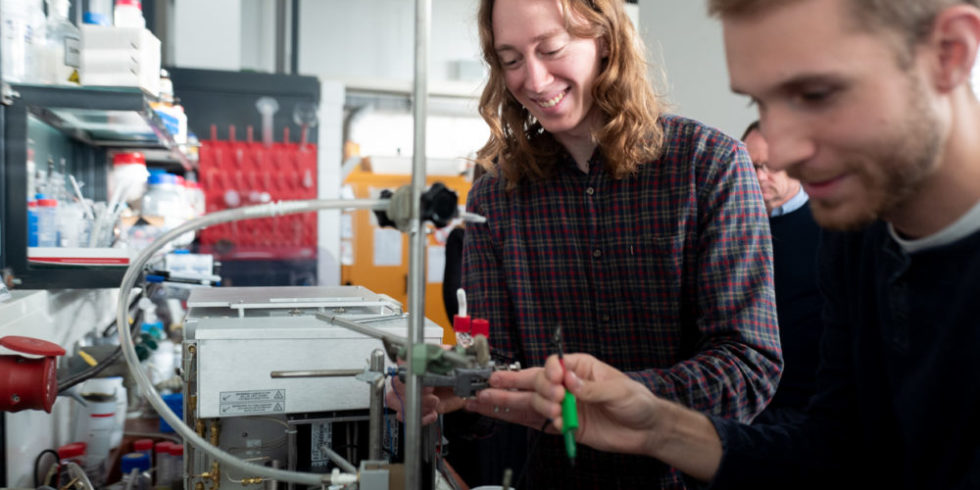 The scientists are working on an electrochemical cell to reduce carbon dioxide.

Ethanol and propanol are raw materials that are used very often in the chemical industry. The quantities required in these industries are correspondingly large. That makes them desirable raw materials. An international team of scientists from the Ruhr University Bochum and the University of New South Wales in Australia therefore researched whether there is an alternative way of producing these raw materials. Her gaze focused on enzymes that show so-called cascade reactions. This means reaction sequences which consist of several independent reaction stages and which take place spontaneously in immediate succession.

“Transferring the cascade reactions of the enzymes to catalytically active nanoparticles could be a decisive step in the design of catalysts,” explains Wolfgang Schumann. The Professor of Analytical Chemistry at the Bochum Center for Electrochemistry wanted to show that it is possible to produce useful or non-toxic substances from harmful gases. And certainly on a larger, i.e. industrial scale. Energy is required to generate these reactions. The amount is very different. In chemistry, the following applies: the most energy-efficient way is always chosen. But that also means that you can only influence the reaction chain to a very limited extent and that different products are created in the process - not just those that you hoped for.

Influence chemical reactions with a catalyst

The special thing about these enzymes, which show cascade reactions, is that they have different active centers. Each of these centers specializes in certain steps within the reaction. This means that a single enzyme can turn a substance that has a rather simple structure into a thoroughly complex product. The researchers used this scenario and imitated it. They made what are known as nanozymes. These are artificial enzymes based on nanomaterials. In this case it was particles with a silver core - surrounded by a porous layer of copper. The scientists used two different components to create two different active centers. Intermediate products that form in the silver core then react in the copper layer to form further more complex molecules. These leave the particles at the end of the reaction chain.

With this approach, the researchers wanted to create a catalyst whose orientation they can define. This should ensure that only the desired reactions take place in the desired order and that undesirable side effects are excluded. In their experiments, the German-Australian team found that the electrochemical reduction of carbon dioxide can take place in these nanozymes. The various reaction steps on the silver core and on the copper cladding converted the starting material into ethanol and propanol. “There are also other nanoparticles that can make these products from CO2 can produce. However, they require significantly more energy, ”says Schuhmann.

Project within the framework of the University Alliance Ruhr

The international research team plans to further develop their concept. Their goal is to be able to manufacture even more valuable products, for example the plant hormone ethylene or butanol, which belongs to the group of alkanols. The project ran within the framework of the University Alliance Ruhr (UA Ruhr). In this alliance, the three Ruhr University Bochum, Technical University Dortmund and the University of Duisburg-Essen bundle their competencies and resources under the motto “better together”. The research was financially supported by numerous German, European and Australian communities and institutes.

There are already other projects in science, CO2 to convert and use it sensibly. Iceland, for example, has one of the largest geothermal power plants in the world. The facility uses hot water to generate electricity and heat for the capital, Reykjavik. At the same time, the power plant converts carbon dioxide from the atmosphere into carbonate. Researchers at the German Aerospace Center are working on producing aircraft fuel from sunlight, water and carbon dioxide. The companies BASF, Linde and ThyssenKrupp want CO in the future2 to be used on a large scale to produce synthesis gas. The VDEh-Betriebsforschungsinstitut in Düsseldorf and chemists from TU Dortmund are also involved. Synthesis gas is an important raw material for the chemical industry. In addition, it is believed that it can be used to produce particularly low-emission fuels for cars and airplanes.

More on this topic: