How did cave people paint 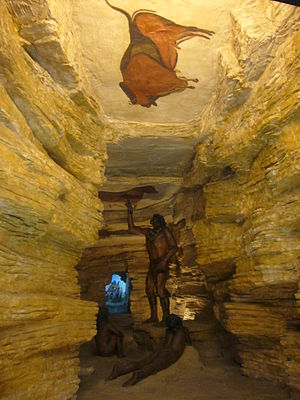 Today, caves from the Stone Age are usually no longer allowed to visit. Visitors broke a lot. The Altamira cave was recreated here. With a doll you show what painting might have looked like.

Some people in the Stone Age liked to live where there were caves. There they found shelter from bad weather. In the past, people even spoke of the "cavemen". But that does not have to mean that all prehistoric humans lived in caves all the time.

Some cave paintings are deep in the earth, or more precisely: in a mountain. They are difficult to get to. You probably didn't live there. It is more likely that hunters met there to get in the mood for the hunt, in other words to give themselves courage.

One suspects this because most of the paintings show animals. These animals lived then and were usually the prey of the Stone Age people. Maybe it had something to do with magic: they summoned the spirits to help them hunt.

They painted with dyes that they found in nature. Red, for example, came from fabrics related to iron. Yellow is the color of a particular clay. The painters used lime and water, sometimes blood, to ensure that the dyes stuck to the wall.

Today, many tourists visit such caves. In several places, however, this had to be banned because visitors scratched off paint or caused other damage. In addition, the cave paintings can become pale from too much light or from the flashes of cameras or cell phones.

There are also other search results for “Cave Painting” from Blind Cow and Ask Finn.

The Klexikon is like a Wikipedia for children and schoolchildren. The most important things explained simply, with definition, many pictures and maps in over 3000 articles. Basic knowledge suitable for children, everything easy to understand and good for presentations in school.
<?