In what order should I see Durarara 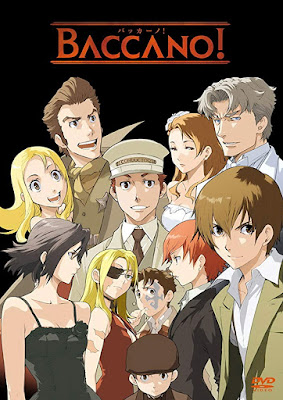 How long I've wanted to watch this anime! And now I've finally done it and it's everything I wanted and so much more!

Length: 16 episodes of 25 minutes each

Brief description: During the early 1930s in Chicago, the transcontinental train, Flying Pussyfoot, is starting its legendary journey that will leave a trail of blood all over the country. At the same time in New York, the ambitious scientist Szilard and his unwilling aide Ennis are looking for missing bottles of the immortality elixir. In addition, a war between the mafia groups is getting worse. On board the Advena Avis, in 1711, alchemists are about to learn the price of immortality.

Overall impression: Oh oh, sooooo much love about this anime! I was so smiling at the last few episodes and oh. <3 The anime reminds me of Durarara in so many ways, which is no surprise since it comes from the same creator, but yeah, I just love the vibe in these two anime and it's so wonderful that I'm back in this one with Baccano Mood and now also have Durarara or Izaya Feels. : D

Story: I just want to love everything about this anime. And I also love the aspect that I'm going to mention now, but I can also understand that some people don't like it because of this - the narrative is a bit confused and there is a lot of jumping back and forth between different storylines at different times, as is also the case with Durarara. (Yes, I know Baccano came before Durarara, but my show order is the other way around.) 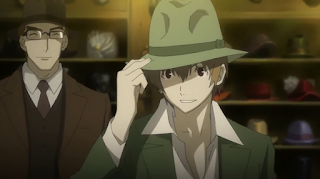 This jumping around can be pretty confusing, especially if you don't look any further in between, which I did too, but since I really like the anime and was able to memorize a lot very well, I actually found it back quite quickly, and neither did that Lost motivation to keep looking.

In general, there was so much tension the whole time and I was so curious about all the characters that I couldn't lose this motivation, even if I didn't look any further in between. The motivation itself was always there because I was so excited.

And ahhh, I really wasn't disappointed in the slightest! The characters, their stories, the big whole story that unfolds over time, and how it all ties together and is gradually cleared up, is so good and so satisfying and ah. <3
A few things remain open, but that is partly due to the story itself and I really like the way this openness is dealt with at the end, generally how the story is framed at the beginning and at the end. It is so perfect! I can't describe it any other way.

I had already told you about the tension and the action was definitely not neglected and I really liked it. I just like how over the top it is sometimes, which is what we are used to from anime.

What I also find very cool about Baccano and Durarara is how the fantastic is incorporated into the real. With Durarara it's even more subliminal, especially at the beginning, but Baccano is definitely going in the same direction and I absolutely didn't know that immortals were part of the story, which isn't really a spoiler, so I mention it. The short description also says that immortality is the main point of the story and a lot revolves around that. Ultimately, it is what connects everything and what keeps you puzzled the whole time.

And oh, immortality is such a great topic that I have a certain idea about myself and ah, in that respect the anime exceeded my expectations so much.

Characters: So damn interesting! All! And I really mean everyone. Okay, there are a couple of really secondary characters who have hardly any meaning, but all the others who also play a bigger role in the story seem so infinitely interesting and so different and so special and unique, which is also a thing with Durarara is.

I also really like this whole gang and mafia thing, it just has a certain charm and the anime does it really well at blurring the lines between good and bad or what exactly is good and bad, which is me always find it very cool.

Writing more about individual characters would probably be pretty degenerate as there are so many and they are all so interesting, but I'll at least mention a few of my favorite characters: Firo, `` Rail Tracer '', Czeslaw, Huey, Chane, Graham.

Conclusion: A really, really good anime with a lot of tension, action, immortals, very interesting characters and that certain atmosphere that I really liked with Durarara. There are different storylines and a lot of time jumps, which I personally find totally cool, but can also be quite confusing.

Definitely a clear recommendation from me! Those who like action and also liked Durarara will like this anime too.