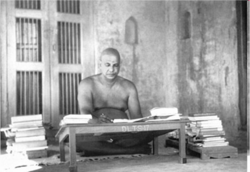 Question: To a certain extent, human actions are determined by his Prarabdha, so he is free in his Kriyamana Karmas. Where is the exact line between these two? To what extent can the Kriyamana Karmas bear fruit and to what extent are these then determined by Prarabdha? And if a person fails to achieve a certain goal, or even to attain a certain object, is there any way to determine whether that failure is due to prarabdha or in its inadequacies in its endeavors? And at what point should one stop one's efforts if they are pointless in view of one's prarabdha?

Answer: An animal that is tied to a pole with a rope has the freedom to move within a circle with this radius of the rope. But it has no freedom to move outside of this limit. It is limited to moving in this area. It is somewhat similar with humans. His mind and discernment give him limited freedom to move within their scope. But his “mind factory” is like the rope with which the animal is tied. The mind is not unlimited and it is determined by the nature of its associated Prarabdha, which determines the body of this individual soul, Jiva.

As long as a person has an awareness of his personality and the ability to make a conscious decision or the freedom to make a conscious decision, he is also responsible for his actions. He is an executor or a doer in the sense of how his actions are active or kriyamana karmas as he carries them out with his full consciousness. However, as soon as events happen that happen beyond his understanding, such as if he had no body awareness, then he will not be held responsible for these actions. These gestures could then be, for example, fruits of previous commitments or previous prarabdha.

Even though each experience is ultimately caused by the prarabdha alone, it is the connection with the consciousness of the individual that requires the effort or a new commitment. And so effort is nothing other than being aware of the actions in relation to oneself, whatever the cause of the action. And so it is not the act per se, but it is the attitude with which it is carried out that then determines whether this is kriyamana karma or not. The actions of a Jivanmukti are not Kriyamana karma, because they are then no longer linked to any personal consciousness. And these are often simply the result of an earlier consciousness of the actor.

Experiences which act on a person without being connected with his personal will are the results or consequences of prarabdha. In contrast, experiences that result from a knowingly and consciously performed or even clearly planned action are kriyamana karma, even if these are conditioned by the law of prarabdha karma itself.

And experiences that are caused by the Prarabdha alone do not cause any new results, but rather reduce them. Kriyamana karma, on the other hand, often causes a new, future experience, just as it is conditioned by the mind of the doer.

If a desired result cannot be achieved after all possible attempts or efforts have been made, then it must be understood that this failure was caused by an unfavorable prarabdha. Of course, this actually means the same thing as pointing out that the failure is due to the inability of the person. Because it is not possible for him today to carry out a greater effort which does not oppose the unfavorable Prarabdha and which would have achieved the goal. Just as the Prarabdha even determines the Purushartha, it must be said that the endeavors themselves can be understood as the working of the Prarabdha, which then works through or through the consciousness of the agent.

Prarabdha, as soon as and as long as it works, can never be suppressed or destroyed. However, it can be exhausted or consumed by experience and by not doing additional kriyamana karma. And even the renunciation of even doing kriyamana karma must be permitted by the prarabdha itself. Otherwise, even renunciation itself is not possible. An evil or unfavorable prarabdha will not allow the kriyamana karmas to be escaped or renounced until it is used up by experience, rebirth and pain.

Only a good or favorable Prarabdha can allow higher efforts, and with it an increasing knowledge and the renunciation or liberation of Kriyamana karmas. But even in this respect the necessary efforts cannot be suppressed. For the Prarabdha itself will then be expressed in the form of efforts through the consciousness connected with it. Sometimes the prarabdha itself did not necessarily manifest itself through the individual or individual consciousness, but through third parties or special circumstances, which then often take place beyond human imagination.

Even if a person is compelled by a third person to do a certain act, or Purushartha, it is only one aspect of his prarabdha in relation to the other who is currently at work. In the state of the highest wisdom, however, this compulsion no longer succeeds. Because all efforts are then stopped automatically and no longer willingly - solely through self-perception, which is the ultimate goal of all efforts. And as long as there is still body consciousness and worldly consciousness, as long as man will make efforts to attain the ultimate goal. And all efforts are the natural consequence of noticing imperfection. As long as man is imperfect, conditioned by his own nature, he will work to achieve that perfection. The question of Prarabdha and Purushartha is thus a relative question and it loses its meaning in the face of the ascending Absolute Knowledge. http://www.dlshq.org/discourse/sep97.htm

May 28, 2021 - May 30, 2021 - Asanas in the spirit of Sanskrit
During these hours you hold the asanas a little longer than (possibly) used and enjoy Sanskrit affirmations that I get from the yoga sutras by Patanjali and Vedantic texts by Adi Shankara ...
05/30/2021 - 06/04/2021 - Vedanta Meditation Course Leader Training
Vedanta meditations aim to question the identification with one's person, to focus attention on the self and to develop clear spiritual instruments. We treat ...

May 23, 2021 - May 28, 2021 - Thought Power & Positive Thinking
Get to know your mind and its sleeping potential. Thinking is the basis for success or failure, joy or suffering, health or illness. Effective techniques from de ...
May 28, 2021 - May 30, 2021 - Develop trust with Sukadev
Learn exercises and approaches from different yoga paths to develop and strengthen your trust: Trust in yourself, in your own abilities. Trust in others, in the good in ...