What is the global reserve currency

Dollar, euro, yuan: the race for the key currency

In order to become a global reserve currency, a currency must meet various criteria, says Gertrud Traud, chief economist at Landesbank Hessen-Thüringe (Helaba): It must be internationally accepted as a means of payment, stable in value, and also as a unit of account or anchor currency with fixed exchange rates other currencies are good.

"Most of them look at their foreign exchange reserves," says Traud. These are reserves of foreign currency that national central banks hoard in order to be able to intervene in the foreign exchange market (e.g. to buy their local currency and support it).

The US currency dominates here, with a good 60 percent of all foreign exchange reserves worldwide being dollars. The euro follows with around 20 percent. After that there is nothing for a long time, then the British pound and the Japanese yen, and finally the Chinese yuan at around two percent.

During his tenure as US president, Donald Trump had complained frequently that the US current account deficit was not fair. But with a policy of high government spending with simultaneous tax breaks, that is the inevitable consequence, says Galina Kolev from the Institute of German Economy. National debt rose by $ 3.2 trillion between the fourth quarter of 2016 and the fourth quarter of 2019. 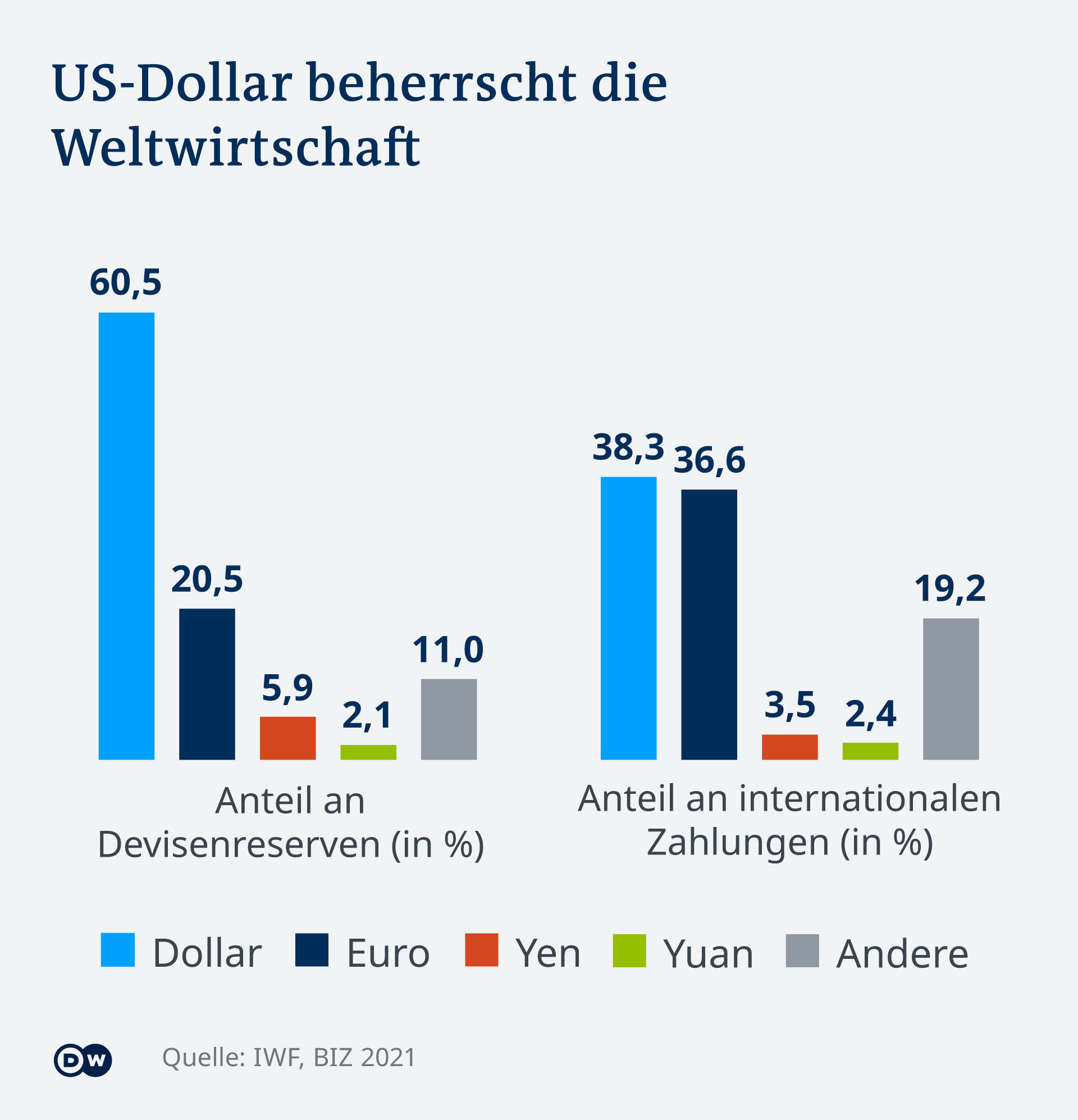 The fact that the dollar was able to assume this dominant position is due to the situation after the end of the Second World War. Until then, the British pound was the world currency. However, the economies in Europe were severely weakened by the war. At the conference in Bretton Woods, USA, they established a framework of fixed exchange rates for the US dollar that would last for thirty years.

Since then there has actually been no official reserve currency, but the dollar dominates: "Despite all the upheavals that we have experienced, the dollar is number one in the world very stable," says Michael Heise, former chief economist at Allianz and now with the German asset manager HQ Trust. Investments in US government bonds and in the currency itself are considered to be fail-safe, which is why many investors invest their money in US dollars.

In addition, the capital market is very broad, something the European currency area cannot offer. "Within the EU there are few secure forms of investment such as government bonds. German or Dutch government bonds cannot completely satisfy the demand for secure euro investments," says Tobias Heidland, economist at the Kiel Institute for the World Economy. Harmonization within the euro area has not yet progressed far enough. However, this could gradually change with the introduction of uniform euro bonds as part of the Corona reconstruction fund.

So far, the euro has only been of regional importance. In addition, the currencies of some West African countries are linked to Europe for historical reasons. They have pegged their currencies to the common European currency via the French central bank. "But there is more of a tendency that people want to break away in order to get more autonomy, to be able to make their own economic and monetary policy," says Heidland. And finally, the D-Mark was strong in some Southeastern European countries before the introduction of the euro, and the euro has also played this role.

China is fighting with the US for world domination. According to the latest forecasts, the People's Republic will replace the USA as the world's largest economy as early as 2028. Nevertheless, many Western experts doubt whether the national currency, the yuan (also known as the renminbi), will play a more important role or even become the reserve currency in the next few years.

The currency market is firmly cemented, believes Adalbert Winkler, professor at the Frankfurt School of Finance & Management. That won't change anytime soon. In order to gain international importance, the yuan would above all have to be freely convertible. But there is still a domestic yuan and one that is used in international trade. The Chinese government does not want to lose control of its currency. But that would be the case if they released the exchange rate.

In this respect, the US dollar is likely to remain the world's leading currency for the foreseeable future. Most foreign exchange experts assume that it will be somewhat weaker in view of the high level of US debt, which is now rising again thanks to the Biden government's stimulus package. But as long as there is no doubt about the solvency of the US, the predominance of the greenback is likely to continue.