Why parrots learn to speak so well

The art of language can be seen in the brain: Researchers have found out why parrots in particular can imitate our language so well. Their centers of vocal learning in the brain are surrounded by an additional cell envelope - and this is greater, the more linguistically gifted the parrot species. It is these additional resources that make the African gray parrots and blue macaws particularly good imitators, according to the researchers in the specialist magazine “PLoS ONE”.

Besides us humans there are some animals that can imitate the sounds of other species. In addition to great apes, dolphins and whales, they also include some species of birds, including crows and parakeets. “But no one can imitate human speech as well as parrots,” say Mukta Chakraborty from Duke University and his colleagues. Why this is so has so far remained unclear.

For their study, the researchers have now taken a closer look at the brains of nine different parrot species for the first time. They analyzed the patterns of gene activity in different regions of the brain - and especially in the seven areas that are considered to be centers for vocal learning in birds. For example, these areas give songbirds the ability to learn and improve their songs. 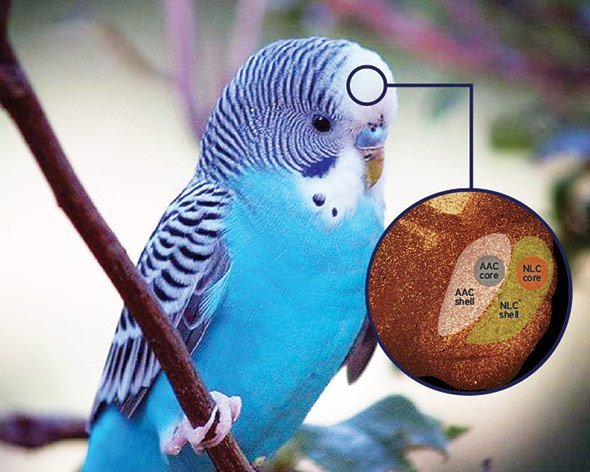 Budgies can also learn to speak. They too have additional cell envelopes around their centers of vocal learning. © Jonathan E. Lee / Duke University

It's the shell that counts

To their own surprise, the researchers discovered clear differences between parrot brains and the brains of songbirds: In parrots, the areas for vocal learning are surrounded by an additional shell made of brain cells. Although these structures had been noticed earlier in the parrot brain, it was not clear what they were used for.

These shells increase the birds' capacity to mimic sounds. They are therefore largest with the parrot species that can speak best. "Species that have rather limited ability to imitate, such as budgies or cockatiels, have large cores but small shells," the scientists report. "On the other hand, the species that learn to speak very well, such as the blue macaws, African gray parrots, yellow-headed amazons or macaws, have significantly smaller kernels and larger shells."

The kea has them too

The New Zealand kea (Nestor notabilis), which belongs to the Nestor parrots, also has such covers around its centers of vocal learning. In his case, however, they are only rudimentary. On the one hand, this explains why these birds can also imitate sounds. On the other hand, it suggests that this expansion of the learning centers must have taken place at least 29 million years ago - the time when the keas separated from the other parrot species.

The researchers also found something else: in parrots, the vocal learning centers are located in the areas of the brain that also control movements. This could not only help to more finely coordinate the various tongue and throat movements when imitating. It could also explain why some parrots even learn to dance rhythmically to music. (Plos ONE, 2015; doi: 10.1371 / journal.pone.0118496)