What are some examples of stimulus 1

The idea on which object recognition is fundamentally based is the following: First, simple features are discovered (1), which in a second step are combined to form a perceptual object (2). This perceptual object is identified by comparing it with objects stored in memory (3). A distinction is made between different forms of processing.

Recognition is easier than identification or classification.

Recognition already takes place when there is the impression of familiarity: You perceive something that you have already seen (e.g. a person who you cannot assign).

Object identification means that the object will be named. A correct classification is necessary for this: the context and the relationships to other concepts must be recognized (e.g. a person you know well, whose name you know).

Data driven (“Bottom-up”): the data-driven processing begins at the receptor level and the data call up rules. If this were the only type of processing available to us, then we would not be able to make use of our wealth of experience.

Concept driven (“Top-down”): in concept-driven processing, previous experiences direct an active search for certain patterns in the object of perception. But if we were to process exclusively in this way, then we would only see what we expect.

The following figure shows references to data-driven processes. They come from investigations with stabilized retina images: Here you can see that the disappearance occurs feature-wise, i.e. whole lines and angles disappear in each case (top figure). If it disappears by accident, the image could look like the one below.

This means that the big H is discovered faster than the small H (Figure A). In addition, he was able to determine that naming the local form is greatly slowed down when the global form (H) deviates from the local form (S) (Figure B compared to A). However, if the global perception of shape is made more difficult (when changing from A and B to C and D), the effect is reversed!

The distinction between integral and separable stimuli again raises the question of what actually characterizes “good” figures? Let us agree with Lockhead (1966) and Garner (1978) that it is something like a "peculiar wholeness" and that "it is not easy to break it down into individual components".

integral: Stimuli that are perceived holistically are then integral. All aspects of the stimulus are felt simultaneously.

Separable: A stimulus is separable when the stimulus aspects cannot be easily integrated. You already know the pattern of points shown below; they are an example of separable stimuli.

Sometimes you can no longer read your own writing, but you can often guess from the context what must be there. This is exactly a "context effect in identification". A nice example of a concept-driven process is the following picture.

The “B” and the “13” are identical, but are identified differently by the context.

Another example comes from Palmer (1975): concept-driven expectations compensate for the lack of detail that would be required in data-driven processing. 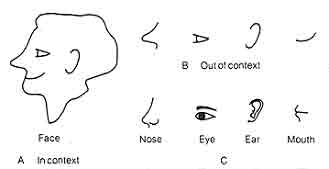