What do you think of nomophobia

Smartphone Addiction: Are You At Risk? 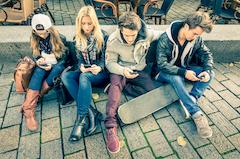 Do you suffer from smartphone addiction?
Bild @ ViewApart - Fotolia.com Ever heard of nomophobia? No? You could suffer from this phenomenon. Because nomophobia, the short form of no-mobile-phone-phobia, is the fear of being unavailable on the go. The term originally comes from England and was launched as part of a 2008 study. In Great Britain at that time it was examined how much time people spend on their cell phones or smartphones every day. According to the results, in 2008 half of the British suffered from nomophobia, in 2012 it was already 66 percent.

Do you suffer from smartphone addiction?
Bild @ ViewApart - Fotolia.com Smartphones or even simple cell phones have become an indispensable part of everyday life for most people. The doorbell is constantly ringing somewhere or you can see heads bent over displays. The motto is always to be available and, if possible, not to miss any Facebook post, Twitter feed or personal message via SMS, WhatsApp or other channels. Over time, this can get on your nerves, especially when people around you cannot or only rarely let go of their smartphones.

According to a current study by the industry association Bitkom, every third German now owns a smartphone. And in the rarest of cases this is only used for making calls. The unanimous opinion of scientists is that the many possibilities that the devices serve also harbor dangers. If people spend a lot of time with their smartphone and get restless when they forget it at home or the battery is empty, this can be the first sign of smartphone addiction. The time that users spend with their cell phone is often underestimated.

When smartphone addicts cannot use their cell phone, withdrawal symptoms similar to those of drug or alcohol addicts can develop. Anxiety, nervousness, and tremors are just a few of the possible symptoms. But there are other, at first glance, less noticeable consequences of excessive cell phone use. If people look at their smartphone too often, it often seems impolite to others. After all, who would want to talk to someone who is obviously more interested in what's going on on their cell phone than in the conversation they just had?

More and more people are talking about cell phone etiquette, which sets out the rules for a healthy and balanced use of cell phones. Do not put your smartphone on the table while eating, only have short conversations at low volume on the train or bus, and when you meet family and friends, pay attention to the other person and not the phone are just some of the recommended behavioral measures.

The topic of smartphone addiction is currently being hotly debated. Computer scientists and psychologists from the University of Bonn examined the telephone behavior of 50 students over a period of six weeks in a study last year. It was found that a quarter of the participants use their cell phones for more than two hours a day. On average, the test subjects looked at the smartphone 80 times a day - the time to sleep subtracted, on average, every twelve minutes.

Nevertheless, the question arises whether the problem is just being hyped, i.e. portrayed in a somewhat exaggerated manner, or whether nomophobia actually represents a danger for many smartphone users.

How do you rate your smartphone usage? Can you put the cell phone aside for a longer period of time, or do you check the device more often so as not to miss any news?
<?