The onion is one of the oldest aromatic plants and the everyday vegetable par excellence. It brings flavor to a variety of different dishes and has become an indispensable part of the kitchen. In some species the tuber is particularly pronounced, in others, however, the leaves. Even the ancient civilizations knew and used the onion as a herb and medicinal plant. What could be more obvious than growing them in your own garden.

Like all types of onions and leeks, onions belong to the lily family. There is a multitude of subspecies, which differ mainly in the size of the tuber and the leaves. The popular garlic is also one of the bulbous plants. Popular varieties are:

Bulb plants like it especially sunny. Warm and dry summer weather favors their growth. The floor should have the following properties:

Fertilize
If the soil is very nitrogenous, the onions ripen poorly and become susceptible to pathogens. Therefore, fresh manure should never be used for fertilization. Ripe compost, which is worked into the soil in autumn before cultivation, is best.

Crop rotation and neighbors in the vegetable patch 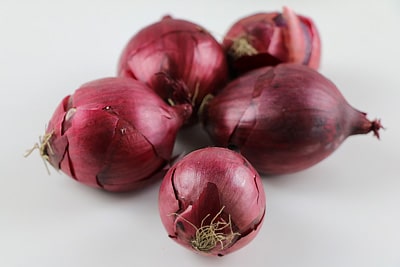 The gardener understands crop rotation as the sequence of crops grown on an area over the years. Different crops draw different nutrients from the soil. Therefore, in the vegetable garden you should always pay attention to what was planted in the bed in the previous year and which neighbors the plants have. This increases the chance of a rich harvest.

Onions cannot withstand strong competition from weeds. If you want a rich harvest, you should ensure that the constantly growing weeds are always removed quickly.

Onion plants are usually grown either by planting onions or by sowing onion seeds. The most common type of cultivation is on onion sets. The advantage of the onion set lies in its rapid development. This makes it easier for them to withstand weed pressure.

Special winter onions are planted in August and can be harvested as early as spring. These plants are perennial. 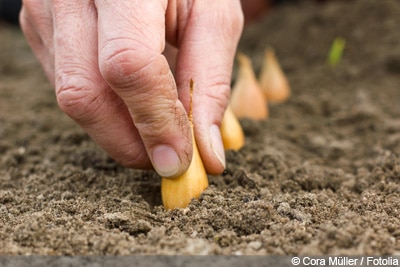 Onions and leeks are easy to grow from seeds. Sowing can be done outdoors under glass as early as March. If you do not have such a possibility, you can also grow the onion seeds in a mini greenhouse on the windowsill:

In the first time, occasional cutting back of the green shoot to about five centimeters can prevent too long and unstable shoots from forming.

Onions do not require special care. However, the gardener should always ensure that the soil is kept loose and weed-free. Chopping the soil should be started relatively early. Onions have very shallow roots and their foliage is quite delicate, so this work must be done very carefully. As the size of the onions increases, the soil can also be piled up a bit. This means the additional application of soil to the lower parts of the plant. These heaps of earth serve as support and protection. Piling up is particularly important with leeks, as the shank remains tender and white in the covered areas. At the beginning of the growing season it should be watered if necessary. Later on, watering is only necessary in very long dry periods. If the plant has developed well, watering must not be carried out at all from the beginning of August at the latest. 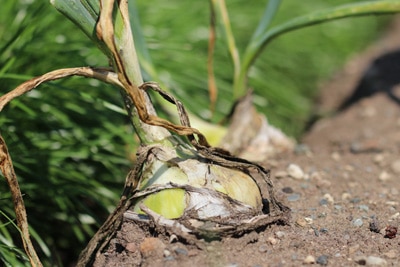 When the foliage begins to yellow or dry out, the onions are ripe and ready for harvest. While onions can usually be harvested as early as July, seed onions are a little later - around the end of August to September. Individual plants can also be removed earlier if they are to be consumed directly. The entire bed is harvested when at least three quarters of the stand has deposited its leaves. In the past, the onion leaves were simply trampled down when they were green. Unfortunately, too early a harvest leads to poor storability and can lead to the skin falling off or sprouting early. It is better to lift the onions slightly in the soil with the manure fork or digging fork, so that some roots tear. The onions then stop growing.

Only flawless and undamaged onions are suitable for storage. The unwashed, dry onions are hung up in a dry, airy and dark place. Light frosts to just below freezing point will not harm the onions as long as they are not moved. The temperatures should not rise significantly above 25 degrees.

Leek species such as the leek can be harvested for consumption much earlier. They usually remain outdoors for storage. They also tolerate light frosts and can survive covered and in a lying position in the open until winter. 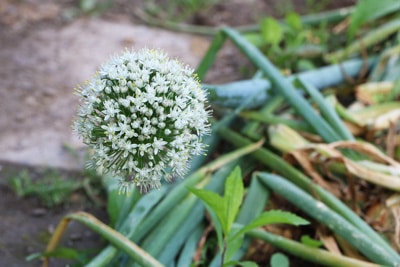 Onions and leeks are usually annual plants that are harvested in late summer or autumn. However, a few perennial varieties are also known that survive the winter outdoors. The winter hedge onion is one of them. It comes from Siberia and is placed between April and June at a distance of 40 by 40 centimeters. Its leaves die in the cold season and then sprout again in spring. While this vegetable used to have a permanent place in home gardens, it has unfortunately been forgotten today. The plant forms real onions that should be divided about every two to three years. After four years the plant will be exhausted. Therefore, new plants should be raised from time to time.

Onions usually do not flower until the second growing season. The plants put their energy to survive either in the bulb (bulb) or in their flowers. Therefore, flowers are undesirable when the onion is to be harvested. If the plants are grown from seeds, there is usually no risk of flowers forming in the first year.

If propagation by seeds is desired, the following criteria must be met so that the plant can produce a flower:

If the prerequisites for the formation of the flower are given, a 20-120 centimeter long, tubular flower stem grows out of the onion. It is hollow on the inside and can appear slightly bulbous in the lower area. It differs significantly from the other leaves by its larger cross-section. Before blooming, the tip is still surrounded by a protective bract. When the flower opens, a spherical umbel appears, which usually consists of dozens of small individual flowers. Depending on the species, these flowers can be white or light purple in color. 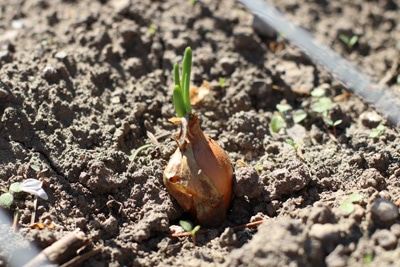 In order to produce seeds, the plant not only needs a flower, but also insects to pollinate it. Asexual propagation via daughter bulbs is possible, but is not used in horticulture. In principle, the following applies to propagation:

Onions are not too susceptible to pests and diseases. However, care should be taken that the location is not too sheltered from the wind. Waterlogging in the soil also has an adverse effect on the health of the onion. This can often lead to powdery mildew in onion plants.
The onion fly is one of the onion's worst enemies. It lays its eggs on the plant as early as spring. Maggots hatch from the eggs and eat the burrows in the plant, causing it to die. The pupae of the onion fly overwinter in the ground. Therefore, no onion should be planted in the same place for at least three years. Carrots in the neighborhood can help prevent the infestation.
Purple spot disease sometimes occurs on shallots. It is widespread in humid areas and usually occurs in autumn. There are oval spots on the stems, which are initially gray in color and can later turn black. If the fungus does not appear until the end of the culture, it does not cause any major damage. All diseased parts of the plant must be removed (household waste). At this point in the garden, onions or leeks may no longer be planted for a long time.

Yellow streaks on the leaves are the typical symptoms of yellow streaking, a viral disease that is transmitted by aphids. Normally, this virus does not cause any relevant damage to the plant, so that difficult control can be dispensed with.

Conclusion
If onions have nutrient-rich and well-drained soil, they do not require any special care for their growth and, depending on the species, mature into flavor-intensive plants in around four to six months. As a rule, the only thing that can cloud the harvest is excessively high nitrogen levels in the soil, the wrong neighbors or preculture and waterlogging.