How to divide decimal places

Decimal numbers and multiplying and dividing by 10's

Multiplying or dividing by 10s does not change the sequence of digits of the numbers. The position of the comma is changed.

The comma is shifted to the right by as many places as the 10's number has 0s.

The comma is shifted to the left by as many places as the 10's number has 0s.

This means that in the example there are more and more 0s between the comma and the 5.

Multiplying by decimal numbers is easy because you are doing the math as if the numbers given didn't contain a comma.

Only when you know the result of the multiplication do you put the decimal point in the result.

Where does the comma belong in the result number?

You count all the digits of the two factors of the task after the decimal point. Your result has just as many decimal places.

If you are unsure whether you have placed the decimal point correctly, you can skip your result.

When dividing with decimal numbers, there are three different cases for the written division.

1. There is a comma in the first number.

You do the math as you did with the written division up to now. As soon as you exceed the comma (there is a green arrow here), you put the comma in the quotient. Rolling over helps here too. The 15 only fits once into the 28. So the comma must be placed after the 1 in the result.

There are tasks in which you immediately exceed the decimal point. In the lower case, the result is 0.19.

2. There is a comma in the second number.

For these tasks you first apply the multiplication by a number 10 so that the comma is omitted. You have to multiply both numbers by the number 10.
This exercise becomes $$ 2850: 15 = $$.
Now you can solve the problem again as before. 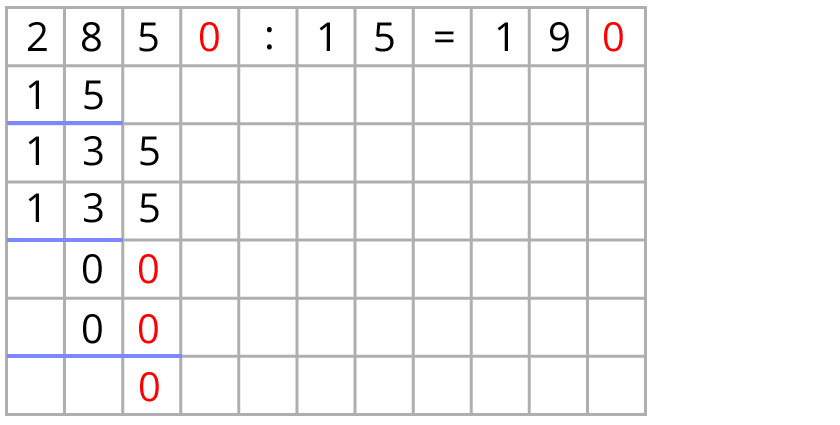 3. Both numbers have commas.

In these tasks you move the comma until the divisor no longer contains a comma. You apply the multiplication by 10s again. Here you have to calculate both numbers $$ * 10 $$. The task becomes:

When dividing it happens that you cannot get by with the digits of the number in order to be able to give a solution. You can get any number of zeros "from above" to solve the problem. 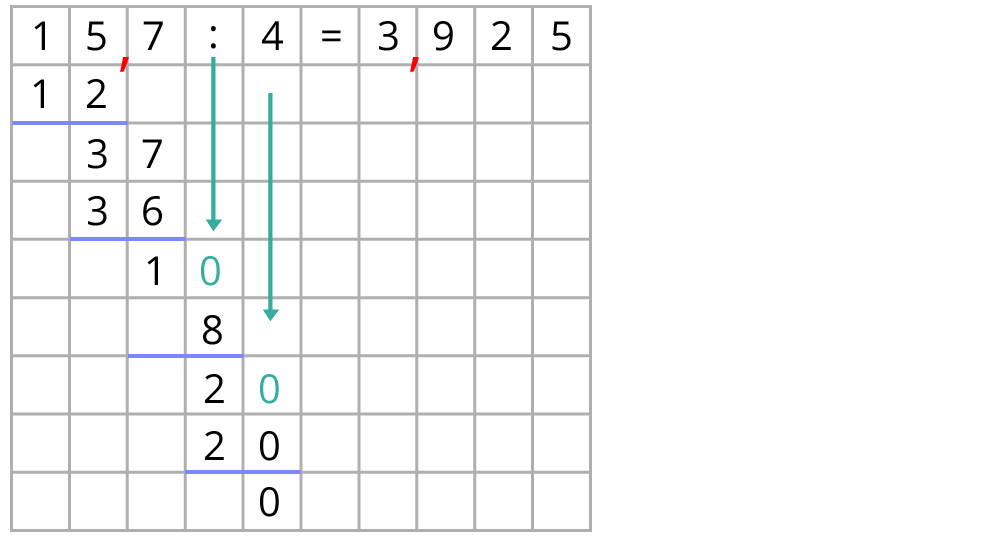 You don't see how many 0's you will need from the task. That's why you don't write them right away in the assignment.

The number without end

By dividing you can get numbers that never end. 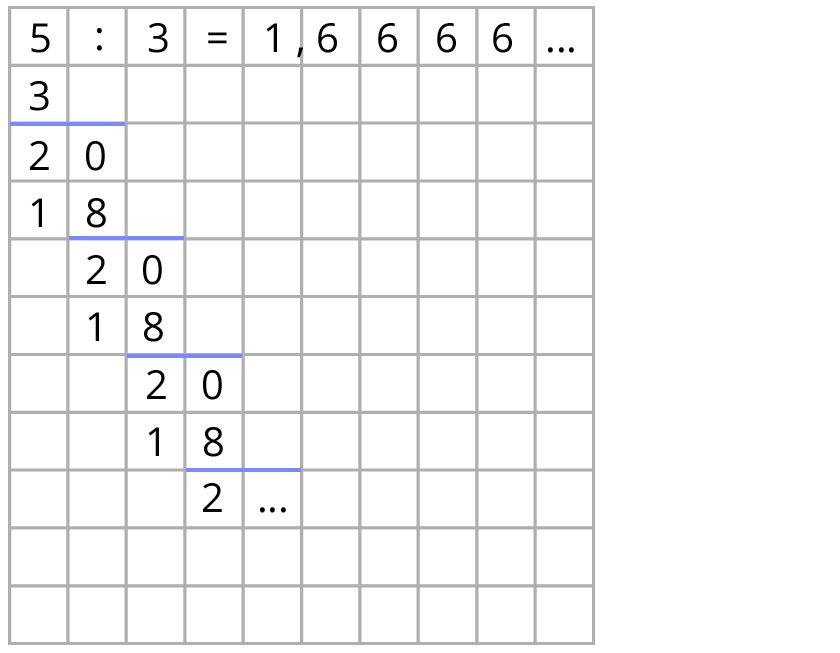 Numbers like $$ 1.66666… $$ are called pure period numbers. You don't write down all 6s because there would be an infinite number. Instead you write $$ 1, bar (6) $$. The line is always exactly above the sequence of digits that is repeated.

You can cancel the written invoice if you see that you always get the same value when you subtract.

The saying “Everything has an end, only the sausage has two” is refuted by dividing numbers. There are numbers that never end.

Another exciting thing about numbers

What do you need decimal numbers for?