How often is the anchor used in negotiations 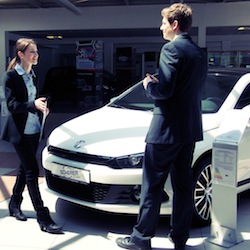 Photo: David Loschelder Take, for example, a negotiation that revolves around the sale of a VW Scirocco (first registration 2008; 80,000 km). The seller can start this negotiation with a comparatively high entry demand of € 16,000 or with a lower sales price of € 14,000. Alternatively, they can choose the entry price more precisely and ask for € 16,250 or € 13,880, for example. Finally, the seller has the option to give the buyer priority at the beginning of the negotiation; she would then ask the buyer for an initial offer for the Scirocco. Each of these alternatives outlined has specific effects on the subsequent course of negotiations and also on the final sales price. These alternatives and their effect on further negotiations are presented below.

In negotiations, the first proposals then act as so-called “anchors” if the information contained in the first proposal systematically influences the course of the negotiations and the resulting result. In particular, the amount of the first asking price acts as an anchor: the higher the entry price quoted by the sellers (e.g. € 16,000 vs. € 14,000), the higher the selling price at the end of the negotiation is usually. Conversely, the lower the buyers buy, the lower the final purchase price will be.

In general, such an anchor effect always occurs when a person's judgment is systematically influenced by additional numerical information (Tversky & Kahneman, 1974). For example, in one of the first anchor studies, people were asked to spin a wheel of fortune that had been manipulated to display either the number 10 or the number 65. Then the same people should estimate the percentage of African states in the UN. Although the number determined by the wheel of fortune was a random number (from the point of view of the test persons), this information distorted the subsequent judgment considerably - after turning the number 10 (vs. 65) people estimated the proportion of African UN states at 25% (vs. 45%). The arbitrary numerical information - the anchor - thus influences the judging person, whose estimate is skewed in the direction of the anchor. 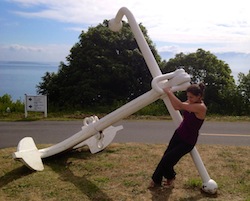 Photo: David Loschelder The distorting influence of anchors is a common, widespread phenomenon and is not limited to the judgment of ignorant laypeople or naive participants in the laboratory. The judgments of experts with many years of professional experience can also be systematically distorted by anchors. For example, both brokers with 10 years of professional experience in the appraisal of a property (Northcraft & Neale, 1987) and judges with 10-15 years of professional experience in the amount of the sentence (Englich, Mussweiler, & Strack, 2006) only insufficiently revised their judgment the influence of an arbitrarily presented number. As a result, high anchors systematically distorted the estate agent's (and judge's) estimate and led to higher price estimates for a property (or the penalties applied).

Photo: David Loschelder Transferred to negotiations, it was shown that initial proposals can also act as anchors. If the seller starts the negotiation in our initial example and names € 16,000 as the first price, this value “anchors” the buyer.

This unconsciously aligns its counter offer to the entry requirement. In negotiations, too, the following applies: the more ambitious the first proposal - figuratively speaking: the further the anchor is thrown - the higher the final profit that the incipient party will make. An anchor thrown far (e.g. an entry price of € 16,000) should lead to better negotiation results for sellers than an anchor placed closer (price of only € 14,000). Galinsky and Mussweiler (2001) were able to substantiate this assumption in several studies. In sales negotiations, in the end, the higher the price, the higher the seller chose in their first proposals. If, on the other hand, the buyer starts, lower initial offers act as an anchor and lead to lower purchase prices.

Such anchor effects can occur more intensely if there is sufficient room for negotiation before the start of negotiations. When buying a new car, given publicly available price lists and little leeway, there are probably fewer anchor effects to be found - the adequate settlement price is simply too obvious. On the other hand, initial offers in the (sale) purchase of used cars, real estate, or in salary negotiations have greater anchor potential, as there may be greater scope for negotiation. In the case of used cars, for example, buyers and sellers are unsure beforehand about the exact price reductions to be applied due to the mileage, signs of use or the age of the car. The first proposal then sets an anchor, which in turn influences the further course of the negotiation and the result.

In summary, the more ambitious a first proposal is chosen - i.e. the further the anchor is thrown - the more advantageous the negotiation result is usually for the beginning party.

Previous research therefore suggests that one should try to come up with the first proposal in order to take advantage of the positive influence of an anchor. This is followed by the question of “how”: Does the amount of the first suggestions alone influence the outcome of the negotiations or does the precision of the offer also have an influence, for example? For example, does it make a difference whether a seller makes a precise price request (e.g. € 13,880 for a 2008 Scirocco) or rather a rounded up or down proposal (e.g. a rounded price of € 14,000)? Current research shows that not only the local placement of an anchor (the height of a first demand) counts, but also the shape of the anchor (the precision of the demand) can increase its effect (cf. Janiszewski & Uy, 2008; Loschelder, Stuppi , & Trötschel, 2013). “Pointed” anchors - meaning more precise, more precise suggestions (€ 13,880 for the Scirocco) - have a more plausible effect on the receiving party and suggest more knowledge on the part of the beginning sender (Loschelder et al., 2013).

As a result, precise first demands have a stronger anchor effect than (rounded) round (te) proposals (€ 14,000). For example, an analysis of the sales prices of almost 13,000 properties in the USA showed that properties that were advertised with precise prices were sold for more money than those whose entry-level offers were rounded (Janiszewski & Uy, 2008). When designing a first proposal, an anchor that is as self-serving as possible and at the same time precise should be chosen.

In the following, we address the question of what the responding party - the recipient of an anchoring proposal - can do to protect itself from these anchor effects. Which armor successfully protects against the anchoring influence of an initial offer? To this end, it is helpful to briefly return to the mechanism of action of anchors. Numerous studies have shown that anchors work because they make anchor-supporting knowledge about the respective object more available. This means that when estimating a car price, for example, a heavy anchor (€ 16,000) leads people to think more of those properties and attributes that are associated with expensive cars (e.g. expensive equipment, powerful engine; see Mussweiler & Strack , 2000a). This mechanism is known as selective accessibility. Information that supports the anchor becomes more present with a high first demand. For example, the judgment of auto mechanics who should estimate the value of an 87 cadet was distorted by the entry price despite 5-10 years of professional experience (Mussweiler, Strack, & Pfeiffer, 2000). However, this anchoring entry-level price had a much weaker effect if the mechanics were initially asked to generate arguments that speak against the price mentioned (Mussweiler et al., 2000). In our initial example, the buyer would ask himself which arguments are not associated with a price of € 16,000. This procedure means that information about the car that speaks against the high anchor (e.g. scratches on the fender, high fuel consumption) becomes more present again (i.e. selectively more accessible). The distorting effect of the entry price is thereby defused, the high anchor is relativized downwards (cf. Mussweiler et al., 2000).