Are there any films on climate change

The thief of light

The film The Thief of Light is about a Kyrgyz electricity rebel who begins to build his own wind farm. The sympathetic and humorous film received the audience award at the 2010 Cottbus film festival. 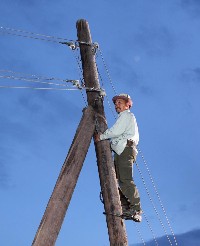 A small village in the vast expanse of Kyrgyzstan loves a man - not just any man, but the local electrician Svet-Ake, whom everyone calls "Lord Light". The father of four has an open ear - for the heartbreak of the villagers, their frustration in marriage and their lust for life, but above all for their electricity bills. And that's a good thing, because the electricity costs in the small village are climbing to astronomical heights. Hardly anyone can afford the light in the dark, let alone otherwise somehow stay afloat. And so Svet-Ake lets the neighbors' electricity meters run backwards - until he comes into conflict with the law and finally loses his job as an electrician. But Mr. Licht is sticking to a bold vision that should lead the village out of trouble and make it worth living in for future generations: he wants to build a huge wind farm. But independence has its price. In order to be able to realize the wind farm, Svet-Ake has to come to terms with the new mayor, who is in cahoots with a windy investor and who is more concerned with his own than with the wellbeing of the villagers.

The Day After Tomorrow

The climate catastrophe film The Day After Tomorrow by Roland Emmerich was produced in 2004 and impressively stages what climate researchers consider to be a possible consequence of the greenhouse effect.

A strong weakening of the Gulf Stream in the North Atlantic leads to a drastic drop in temperature in Northern Europe and catastrophic storms worldwide. The entire northern hemisphere was a single blizzard, a giant tidal wave over New York, huge tornadoes in Los Angeles, snow in New Delhi, hailstones the size of grapefruit in Tokyo. Climate researcher Jack Hall sets off from Washington to New York, where his son Sam and friends are snowed in and are fighting the cold, disease, wolves and hunger.

The science fiction adventure Children of Men shows a dark end-of-time version in which a shabby England like the other rich nations has become a collecting basin for refugees from all over the world. The film is set in 2027. Not a single baby has been born for 18 years. An unknown phenomenon has made all women sterile. Despite martial law, there is chaos in England. In the midst of this abyss, it is up to a handful of people to give humanity its last chance. Despite the English title, the film is also available in a German version. The British-American science fiction thriller by director Alfonso Cuarón premiered at the Venice Film Festival in September 2006 and was shown in German cinemas in November 2006.

The science fiction film Avatar - Departure after Pandora by director James Cameron, set in 2154, impressively depicts the continuation of the destruction of the rainforest on a distant planet.

Having arrived from the almost treeless earth, people begin to destroy the jungle on the planet Pandora in order to mine a valuable raw material. At the same time, a few scientists are trying to research the exotic forest with its unknown, diverse creatures and the humanoid Na'vi that live there.
The ex-marine Jake Sully, paralyzed from the waist down since an injury during a combat mission, is brought to Pandora to become an avatar - a cross between human and Na'vi genes, to explore the surroundings and the Na'vi to infiltrate. An avatar is mentally controlled by a human being, in that the human brain and the sensory receptors are connected to the avatar body via a special technology.
During his expeditions in the jungle, Jake gradually gets to know the life and culture of the Na'vis, who live in harmony with nature. He gets more and more into a conflict, with himself and with his outside world. He has to choose whose side he is on - in a battle that will determine the fate of an entire world.

The Age of Stupid

The documentary drama The Age of Stupid takes place in 2055.

An old man who lives lonely in a ruined world creates a message to send it into space. In a polar knowledge and bio archive he has the opportunity to zap through old snippets of news from the beginning of the 21st century and thus to get to the bottom of the arrogance of mankind in relation to the destruction of the environment at the time. Using real news material, he documents how mankind could be exterminated and shows why our age could be described by future generations as the age of stupidity. The natural disaster in Katrina, the misery in Nigeria and Iraq, but also the failure of hopeful approaches, such as the construction of a wind farm, are discussed.

The movie Fredericos Kirschen, released in 2010, is a comedy about love for nature.
A calf is born. It's wobbly on its feet. The farmer gives him the strange name Kyoto. Even at a tender age, it becomes the bearer of hope in a small, idyllic village in northern Spain, which lies in the shadow of a gigantic power station. This is where Federico lives, who, firmly believing in the Kyoto Protocol, has committed himself to the fight against the polluter. With ingenuity and stoic persistence, he goes to the field to protect his fruits, vegetables and land. He successfully ignores the fact that not everyone in the valley agrees with him.
The Scottish author Pol Ferguson was unintentionally stranded in this idyll while researching the natural wonders of northern Spain. He begins to be interested in Federico's concerns. Increasingly, he succumbs to the charm of the villagers and especially that of Cristina. The attractive Spaniard lives with her children and the strange father-in-law, who fishes everything except fish, directly below the power station. As an employee of the power plant, your brother has his own views. His intense, but fruitless efforts to father a child with his wife, however, raise questions ... a hit for Federico.

Year 2022 who want to survive (Original title: Soylent Green) is an American science fiction film from 1973, which deals with the problems of the excessive use of finite resources, environmental pollution and overpopulation together with their possible effects in a future scenario. 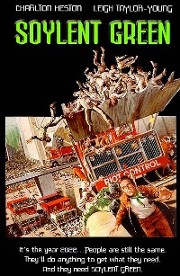 Released a year after the Club of Rome's The Limits to Growth report, the film is one of the earliest eco-dystopias.

The year is 2022: the city of New York is hopelessly overpopulated with 40 million people. There is a lack of elementary resources such as water, food and housing. Only a few politicians and wealthy citizens can afford clean water and natural food (e.g. a jar of strawberry jam costs around $ 150) and live in relative luxury. In the midst of this chaos, the police officer Robert Thorn and his older colleague Sol Roth lead a bleak existence.
Police officer Thorn is ordered to investigate the murder of a wealthy, influential man named William R. Simonson. Thorn quickly discovers that he did not surprise a burglar in his house, but was the victim of a targeted murder. Sol learns that Simonson worked for Soylent. This company - the name is a combination of Soy (soy) and Lent (il) (lentil) - controls the food supply halfway around the world and sells the man-made foods Soylent Red and Soylent Yellow. The latest product is the much tastier and more nutritious Soylent Green, supposedly a concentrate made from plankton, which is selling well.
Source: Wikipedia. 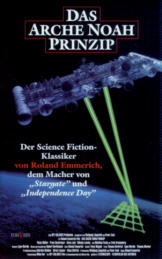 The German science fiction film from 1984 The Noah's Ark Principle is Roland Emmerich's directorial debut. On the Florida Arklab space station, two astronauts are researching the possibilities of influencing the climate and weather events on earth.
When a conflict breaks out in the Middle East, weather control technology is said to be misused for military purposes. Since influencing the weather would also trigger devastating flood disasters, astronaut Max has scruples and manipulates the system. Two more astronauts are then sent into space and a fight ensues over control of the system.

Ecogainder is a Japanese television program about a group of superheroes who act as role models for children.

Ecological destruction has brought the planet to the brink of collapse, so the superhero Ecogainder is sent to earth from the future to teach children how to preserve the environment with small changes in behavior.
The characters of the episode with English subtitles are:
Ecogainder: Eco is great (Eco ga iin da)
Mudaana: waste (mudana)
Hakais: destruction (hakai)

The docufiction 2075 - Scorched Earth outlines a scenario in the future in which global warming has led to dramatic changes.

Protagonists in different regions of the world, whose fates are interwoven, experience the effects of climate change on their lives. The future prognoses are based on the findings of scientific research by the Intergovernmental Panel on Climate Change (IPCC) and show the drastic consequences if people's environmental behavior does not change.
Julie Peyrefitte, for example, lives in the south of France and has taken over her grandfather's winery there. A swarm of locusts devastates their vines. The fields are also threatening to dry up. Julie's dream of growing oranges where grapes can no longer grow is about to explode. At the same time, Idri and his friend Faouzi from North Africa are on their way to Europe. In their homes, the drought has deprived many of their livelihoods. With the last of their strength, the young men cross the dangerous desert, past abandoned cities and seemingly endless fields with solar mirrors, on which electricity is produced for energy-hungry Europe. In a selection process, only those Africans who, in the opinion of the Europeans, fit into the severely restricted labor market are taken in long tests in a reception center.

The Lorax is a 3D animation film produced in 2012 based on the American children's book by Dr. Seuss.
One day Ted goes to the industrial tycoon Once-ler to ask him why the world has become so ugly and everything is made of plastic. Ted knows from his grandmother that it used to be different.
The once-ler now tells him his story of how he once felled a tree in a beautiful valley full of trees and the Lorax, a forest dweller, pointed out to him that this would not be good. But since he could make money with the felled trees, he cut down more and more forest. Inventively, he designed new tools for harvesting wood and built factories to process everything.

The old cartoon version of the film can be found in English on YouTube.