A algorithm (also called solution procedure) is a guideline for solving a problem in a finite number of steps. This processing rule consists of a finite sequence of clearly executable instructions which always deliver the same results under the same conditions. The algorithm is described by a text consisting of elementary instructions.

Definition and properties of an algorithm

With the help of the concept of the Turing machine

the following formal definition of the term can be formulated:

A calculation rule for solving a problem is called an algorithm if and only if there is a Turing machine that is equivalent to this calculation rule and stops for every input that has a solution.

The following properties of an algorithm can be derived from this definition:

In addition, the term algorithm is often restricted to the following properties in practical areas:

Generality
The algorithm solves a lot of the same problems, a whole class of problems.
Repeatability
With the same prerequisites, an algorithm always delivers the same result.
Uniqueness
The following step is clearly defined at each point.
Finiteness / termination
The algorithm consists of a finite number of steps and always comes to an end. The sequence of instructions must also be described in a finite text.
Feasibility
The instructions must also be clearly formulated and executable.

Origin of the term

The term algorithm essentially comes from Abu Abdallah Muhammad ibn Musa al-Khwarizmi, who in 825 published the book "Al-kitab al-muchtasar fi hisab al-dschabr wa-l-muqabala". This book is about rules for restoration and reduction. The book had a major impact on Arabic and European mathematics. It was also translated into Latin, and the word algebra developed from the title al-dschabr. This book also begins with the words "Dixit Algorithmi ...", which means something like "Also Spoke Algorithmi". This is a word creation derived from the name of his birthplace al-Khwarizmi.

Algorithms are represented in structure diagrams. 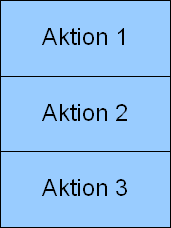 = A sequence of instructions

= As long as a condition is met, the action is repeated.

= As long as a condition is met, an action is carried out.

= An action is carried out until a condition is met. 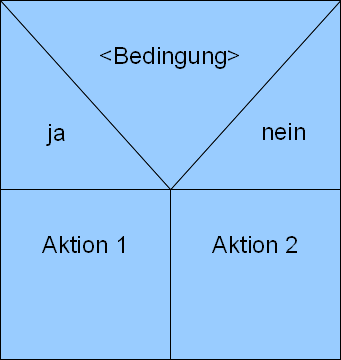 In our everyday life there are often situations in which we use algorithms. For example, when making coffee or starting up the computer. The coffee making and the computer start-up are algorithms, since these processes are always carried out in the same way.

Algorithm for writing and sending a letter

Algorithm for writing and sending a letter

When brushing your teeth, the problem can arise that the toothpaste tube is empty and you have to change it. When the tube is full, you can continue to use it, but when you empty the pasta you either have to take a new one out of the cupboard or, if there isn't one, go to the store and buy one.

Problem: You have two minerals (emerald and ruby) that have to be determined. 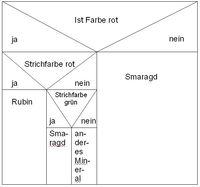 Algorithm of the Week for the Computer Science Year

A teaching unit on algorithms can also be started through a teaching text. Here is an example of a teaching text that also contains tasks for different skill levels: