Why are people crazy about others

At the age of 25, everything suddenly began to turn for Sebastian Kraemer. He was an intern in the canteen of a large recruiting company. With an effort he made it to the table, pale as chalk, with beads of sweat on his forehead.

It was just a flu-like infection that had strained his body. But when he was back in the canteen a week later and was reminded of the incident, he was afraid, afraid that it would happen again, afraid that it wasn't just a flu. And this fear increased.

Kraemer listened to himself more and more often. If there was a pinch in his chest, if his eyes flickered, if he had a slight headache, he sat in front of his computer and spent hours searching forums, blogs and sites for symptoms of the disease. He hoped that this would reassure himself. "But searching the Internet has never reassured me," he says.

Rather, he thought from what he had read that he was suffering from an incurable disease. Sometimes he suspected he had multiple sclerosis, sometimes cancer, sometimes cardiovascular problems. And he kept getting checked up by the doctor.

He spent several days in the hospital for a head-to-toe X-ray and examination. But the doctors found nothing. "For now I was calmed down, but after a few days doubts crept in again," he says: "Couldn't you have overlooked something?"

More on this: The fear of death as a constant companion

Kraemer suffered from hypochondria. This is a mental illness in which physically healthy people are very afraid of having an incurable disease. It's an anxiety disorder called.

Dealing with possible diseases takes more and more time and affects everyday life. Some sufferers move from doctor to doctor. If a doctor tells them everything is fine, they fear that they have missed something.

Professor Alexander Gerlach knows these worries from his patients. He heads the special clinic for anxiety about illness at the University of Cologne. Instead of hypochondria, he prefers to use the term disease anxiety disorder or somatic stress disorder.

"The terms hypochondriacs or hypochondria can easily be stigmatized because in society it often implies that the symptoms are only imagined," he says: "The symptoms are usually there and not imagined. But they do not have to indicate a serious illness. "

He says 70 percent of GP visits couldn't identify a specific illness for a symptom, such as pinching or squeezing in a particular area. General fear of illness is widespread. But most people feel reassured after a visit to the doctor. However, around 1 percent of the population is so worried about illness in everyday life that they hardly think about anything else.

More on this: Psychology of Phobias: You can do something about anxiety disorder

Panic attacks - the fear of fear

Sebastian Kraemer's hypochondria also had a generalized anxiety disorder. He was worried about everything. He suffered panic attacks. And after each one the fear of the next panic attack increased. Kraemer was afraid of the fear.

The fear became particularly bad in public situations in which he could not escape so quickly. In the cinema, on the tram, at the hairdresser's. Anywhere he couldn't get out of the room quickly without a fuss. He felt dizzy, his pulse rose, he began to tremble and sweat and could hardly concentrate on the situation he was in.

In addition, his hair fell out during that time. He went bald, lost his eyebrows and all hair on his body. "I doubted that it was all psychological," he says. And then he looked again for possible physical causes and possible diseases.

Professor Gerlach and his team of therapists first get to the bottom of the patient's previous experience and behavior. Then he explains that listening too much inside the body alters the sensations. What was not noticed before is now worrying.

Patients need to learn to focus on other things. In therapy, the therapist also provokes certain body reactions so that those affected learn to deal with reactions from their body. There is also a small touch device that vibrates under the finger or a breathing device.

In addition to individual therapy, there is also group therapy. "It's good to find out that others have had similar experiences," says Professor Gerlach. In general, he also recommends relaxation exercises and sports.

More on this: How sport helps the psyche on the jumps

Sport and relaxation also helped Sebastian Kraemer. He got to know exercises like progressive muscle relaxation during a cure. He had already undergone psychological therapy before, but most of the time the conversations revolved around his fears.

At some point the panic attacks became too much for him. He signed up for six weeks of psychosomatic rehab. "The decisive factor for me was that I just got out of my everyday life to deal with myself and my life," says Kraemer today. 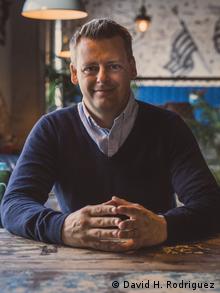 Fear as a distraction?

He is convinced that the hypochondria can also be a distraction from other thoughts, says Kraemer. "I was facing a new phase in my life, had to deal with how I wanted to live, whether I was single or whether I wanted to take responsibility for children, what I wanted to work as and so on."

If you are concerned with the fact that you may be seriously ill, you don't have to deal with other things. "To look at your own life without make-up and to have to say: 'I don't like it that much!' regardless of the fears, it can be very painful, "says Kraemer.

That is why it is very important to be honest with yourself. What is not going according to plan right now? What are the difficult decisions to be made? These are just two questions Kraemer learned to ask himself.

Kraemer suspects that one can subconsciously distract oneself from a lack of passions or boredom in life by dealing with possible illnesses for several hours a day. However, this was not the case with him. Professor Gerlach can imagine this mechanism as a possible factor. This explanation for hypochondria has not yet been well proven in research.

Fear from the past

As a therapist, Gerlach pays more attention to whether his patients had previous experience with illnesses - with themselves or with loved ones. People in professions that involve disease can also be vulnerable.

Sebastian Kraemer's father died early due to a serious illness. That could have influenced his hypochondria, says Kraemer.

"If I experience blows of fate today, I'll take care of myself," he says. "When I notice that I am not feeling well, I concentrate on what is really going on, which feelings, such as sadness, need their space." He then tries not to start again, to look for possible symptoms of the disease and not to distract himself with hypothetical clinical pictures.

A little fear is good

His hair also grew back after the cure. Professor Gerlach says hair loss is not a typical symptom of an anxiety disorder. But mental and physical recovery cannot be separated. "Even a broken bone heals faster if I'm mentally healthy," says Gerlach. It is important to get support from an expert in the case of mental illness.

During his cure, Kraemer also looked for answers to his most important questions. During the cure he had to imagine that he only had three days to live. The doctor wanted to find out whether Kraemer's hypochondria could be linked to the fear of death. That was not the case with Kraemer.

He overcame his anxiety disorder, started playing soccer again, relaxed listening to music and even painting. And he wrote a book and a blog. In it he tells his own story to encourage other people to overcome their anxiety disorders.

A completely fear-free life is not desirable, says Kraemer. "Fear to a normal extent protects us from stupid things, promotes creativity and increases concentration." But he has noticed that a life free of anxiety disorders is possible if you really deal with yourself.