Why does the multiverse theory scare me?

Do we live in a multiverse?

I am always amazed at all the things that can be done with science. We're actually just a couple of monkeys who have only recently figured out how intelligence works - and yet we are able to find out things about the universe that are amazing.

And science always surprises you ...

A good year ago I learned about the fascinating work of Alexander Kashlinsky from Goddard Space Flight Center reported by NASA and its colleagues.

Using data from the WMAP satellite, which studies cosmic background radiation, Kashlinsky and his colleagues have found that distant galaxy clusters do not move the way they should. They are all moving in a certain direction and faster than they should be. 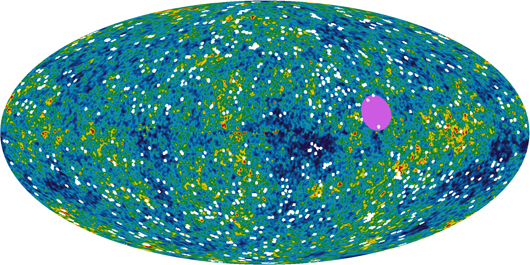 WMAP image of the cosmic background radiation in the universe. The galaxy clusters move in the direction of the violet ellipse (Image: NASA / WMAP / Kashlinsky et al.)

This phenomenon was based on dark matter and dark energy dark flow or. "Dark rivercalled s ”.

Recently, Kashlinsky et al. published a new article on the subject. It bears the unspectacular title "A new measurement of the bulk flow of X-ray luminous clusters of galaxies" - but it has it all!

Kashlinsky says of the results:

If the river really extends to the cosmological horizon, as our results suggest, then its origin is very likely linked to the structure of spacetime before inflation [these are the first milliseconds after the Big Bang] and can give us clues to a multiverse give one form or another.

The inflationary phase that Kashlinsky speaks of is part of the standard cosmological model that states that shortly after the Big Bang, the universe expanded extremely quickly for a short time - faster than the speed of light (this superluminal expansion
Incidentally, does not violate the theory of relativity). That is why there are still areas in the universe that go so far
far away that the light from there didn't have time to get to us
(they lie beyond the “cosmological horizon” mentioned by Kashlinsky).

Obtaining concrete observational data from this period is extremely difficult. But it seems that perhaps examining the Dark River could really shed some light on the pre-inflation universe.

And this is where it gets interesting! The very first moments of the universe are not yet fully understood. There are several theories or hypotheses here and some of them postulate a “multiverse”. In other words, several universes that virtually exist “next to each other”. These hypotheses also claim that the parallel universes can exert a certain force on our universe - which thendark flow" caused!

The cosmologist Laura Mersini-Houghton even thinks that "these results are one of the most direct indications of a multiverse" are. The multiverse theory would predict a dark flow and the predicted velocities would also agree well with the observations.

Of course, the hypotheses about the existence of a multiverse are not undisputed and the observation data are still far from clear enough. But the mere fact that we are able to discuss this question on the basis of concrete predictions and measurements is fascinating.

It was only almost 400 years ago that we noticed that the earth and the sun are nothing special and that there are countless other stars in the universe. Less than 100 years ago we found out that there are countless other galaxies besides our Milky Way and that the universe is much larger than we thought. And today we may soon be able to find out if that is Universe itself is unique or whether other universes exist! Science is so cool!

I am always amazed at all the things that can be done with science. We're actually just a couple of monkeys who only recently figured out how ...