Bus and metro in Los Angeles

“Los Angeles by public transport - poor guys” - something like that, we were greeted at the tourist information office at the airport when we explained our plan to explore Los Angeles by metro and bus. This statement also coincides with the often heard prejudice about L.A .. During our stay in Los Angeles, we were able to literally experience for ourselves that all of this is not true.

Admittedly, the network of public transport seems to be relatively thin at first. For a city with more than three million inhabitants, a few metro lines and a bus network are far too few at first glance. Appearances are deceptive, however - Los Angeles is wonderful to travel to by public transport with a little planning.

The only important thing for tourists are the 4 metro lines that also go to the city center or to the airport. These connect the most important points of Los Angeles: Hollywood, Universal Studios, Beverly Hills, Downtown, the airport and Long Beach. These metro lines are quick to get around, but the long distances in Los Angeles still take their toll.

The bus network can hardly be mapped, but somehow still easy. Most Los Angeles bus routes just run straight out. There are also some so-called metro buses, some of which are a little faster.

We recommend buying a day pass, especially when using the metro, which is affordable at $ 6.50. For the buses, in which most day tickets are not valid, single trips are recommended, as these usually cost between $ 1 and $ 1.50 and are therefore financially very attractive.

As described above, at Los Angeles International Airport we were advised not to use public transport to explore the city. Nevertheless, we made our way and admittedly the transfer from Los Angeles Airport to Downtown actually takes a relatively long 1.5 hours. Nevertheless, we already got a first glimpse of California's largest city.

It started with the free shuttle from the airport to the Aviation / LAX metro station. This runs directly in front of the terminal. It is important here to take the green line. 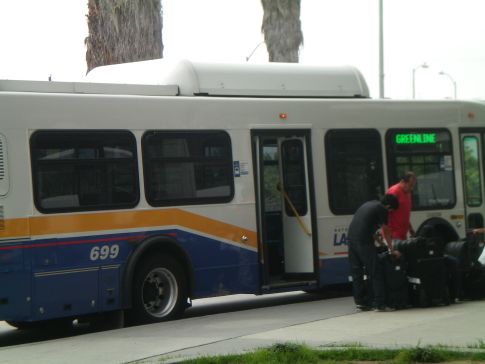 When we arrived at the terminus of this bus, we first bought the day tickets mentioned above. We took the green metro line in the direction of Norwalk to the Imperial / Wilmington station. The change here was relatively problem-free. Incidentally, a metro station can look like this: 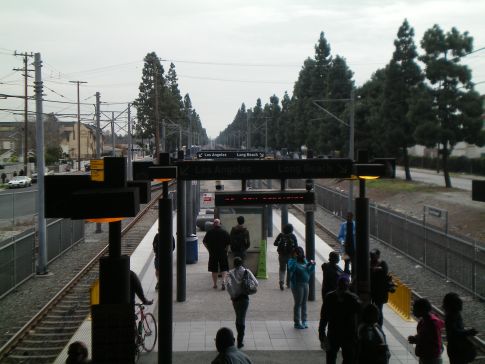 The blue line continued to the terminus 7th Street / Metro Center. Those who are able to walk can already start their city tour here. We, on the other hand, took the last stage to Union Station, which can be covered either with the red or the purple line.

The Union Station in Los Angeles is, by the way, an attraction in itself, because here you can still admire a really noble train station in antique and elegant colors. Traveling by train still has charm! 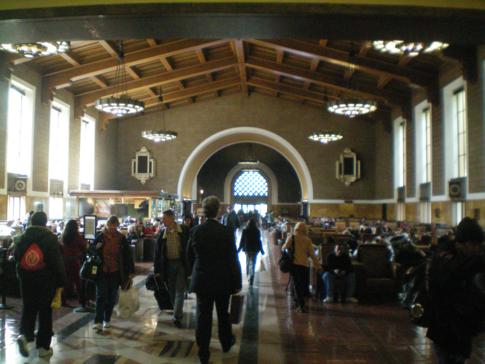 During the day we finally used the metro in the direction of Hollywood and out to Universal Studios. Everything went smoothly, most lines run every 10 minutes. The stations are clean, the tracks were well manned depending on the time of day, but not to the point of being full.

The buses, too, were to be put to the test on this day as part of the local public transport system in Los Angeles. Here, too, orientation is difficult at first, as there is no comprehensive bus map or similar. We therefore asked a small tourist information office in Hollywood, which was also able to give us the correct numbers to get to Sunset Boulevard. This then worked without any problems.

The next day, she took her final exams for public transport in Los Angeles. We wanted to go to Santa Monica from our hostel, the Orbit Hostel. A map in the hostel immediately showed us the possible lines - both drove two blocks away. And lo and behold - everything went smoothly here too. Paid $ 1.50 and in just over 30 minutes we were right on the pier in Santa Monica. What more does the carless tourist in Los Angeles want?

The last stage, however, almost seemed like child's play. We wanted to go to the airport from Santa Monica. An express bus was recommended to us after a short request. What else can you say - as the timetable stipulated, we arrived at the airport exactly half an hour later after leaving Santa Monica. Perfect!

In 2015, there was finally a new test for public transport in Los Angeles and also in Long Beach. I had to take public transport between the airports of the respective cities, as I arrived at Los Angeles International Airport by plane from Hawaii and had an onward flight to Las Vegas from Long Beach Airport. 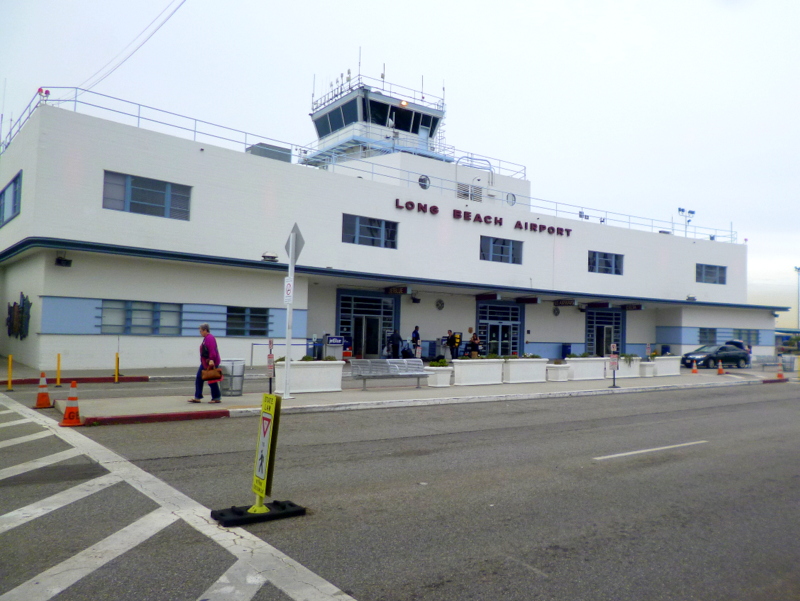 The two airports are at least 40 kilometers apart, which is a decent distance for the bus in a city. But the system is surprising here too, because only one change is necessary for the long distance. From the LAX City Bus Center, which can be reached with the free Terminal Link at Los Angeles Airport, line 232 goes to Long Beach every 30 minutes. The journey takes around 1.5 hours, but for US $ 1.75 you can comfortably get to your destination. In Long Beach, line 111 finally takes you to the airport, which is around 20 minutes away, for US $ 1.25.

In total, you should plan around 2.5 hours for this transfer. Since a taxi or other airport shuttle also takes at least 1 hour, but would cost at least ten times as much, the bus is a very practical option to get from the airport in Los Angeles to the same in Long Beach.

Local public transport in Los Angeles can certainly not be compared with those in London, Berlin or Munich. Nevertheless, one can clearly refute the prejudices regarding public transport in Los Angeles. A city tour with all the highlights is also possible without a car. The airport transfer from Los Angeles to Long Beach is also no problem. Personally, I would even prefer to get around by bus than by renting a car, because you simply travel less stressful, don't have to look for a parking space and experience a small part of Los Angeles as well.