What reforms do Muslim countries need

"We are in the middle of an Islamic Reformation"

Sharia in a secular state - isn't that a contradiction?

Abdullahi Ahmed An-Na'im: Not necessarily, because the question is what we mean by that. Many people think of Sharia law as legal, but it is the entire normative system of Islam as set out in the Quran, Sunna and Hadith. The Sharia also contains regulations on how to pray or fast. Understood in this way, even in a secular state it is impossible to refuse Muslims to orientate themselves towards it. But a state, regardless of whether it is predominantly Muslim or not, can never enforce Sharia law, because it is not a matter of codified law. It's about interpretations that people should choose based on their own conviction.

Then what is Sharia in your eyes?

The Sharia is an ethical instruction for action for the individual Muslim. State and religion should be clearly separated from each other. For me as a Muslim, the state has to be secular so that I can practice my faith out of conviction and free decision. So from an Islamic perspective, that has nothing to do with the European Enlightenment. It is none of the government's business whether I am an atheist or a believer.

If state and religion can be clearly separated, what role can religion play in public life?

I differentiate between the state and politics. The state has nothing to do with religion, but it is relevant in politics. Just as the CDU in Germany sees its political convictions as being inspired by Christianity. Whether you ban Sharia from politics or not, it will continue to guide the political action of Muslims. Whoever wants to prevent this disenfranchises Muslims.

Why does this have nothing to do with the European concept of a secular state?

When Muslims founded their first state in Medina 1,400 years ago, it was neither Islamic nor religious. This state was a political institution, neither the Muslims themselves nor their opponents described it as a religious state. The concept of the Islamic state is a post-colonial construct that connects the European nation-state with the idea of ​​Muslim self-determination. Not everything in the world goes back to the Enlightenment and European ideas of the secular!

So does the secular have different faces?

By French standards, Germany would not be considered secular. Great Britain, where the Queen is head of the "Church of England" at the same time, would not even pass as a secular state according to German standards and nevertheless all three are called secular states. The fact that the secular state emerged from the Enlightenment is a gross simplification that cannot be proven in European history. But the nation state is a European construct that was imposed on the colonized in Africa and Asia. After their independence, Muslims found themselves in the European nation-state that did not correspond to their culture and values. European powers arbitrarily imposed it and the tragic consequences of it we see today in Syria and Iraq.

But it is not a consequence of colonialism if Islam is the state religion in these countries to this day. 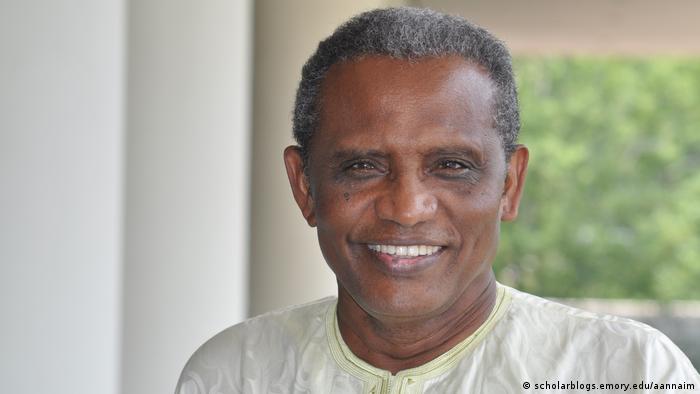 Abdullahi Ahmed An-Na'im was born in Sudan in 1946

It does mean that there is no separation between state and religion.

Article 2 of the Egyptian constitution states that Islam is the state religion. But there is no reference to this fact in the rest of the articles of the Constitution. Article 2 is irrelevant, it is propaganda, a way of legitimizing the state, but without legal consequences. Egypt is ruled by a military regime that overthrew the elected President of the Muslim Brotherhood. His supporters are in prison and executed for political crimes. The military has taken over the state, although Article 2 is still in the constitution. A strong alliance has emerged between the state and the religious institutions, which primarily serves the rulers.

One of your demands is that Muslims should free themselves from colonialism. What do you mean by that?

The hearts and minds of Muslims are still occupied by European epistemology and philosophy, by European concepts for the administration of a state, although they have been nominally independent for decades. Colonialism is not just a military occupation, it is a state of mind for the colonized as well as for the colonizers. Those who have been occupied are helping to submit to colonial and neo-colonial priorities. As a Muslim, I have to free my own mind, heart and soul in order to become an independent person again. But I am not rejecting the influences of European or American culture.

What does that mean for the debate about a secular state?

As long as we imitate European models, we are not really exempt from colonialism. We have to root our political models in our own history by trying to decipher the meaning of Islamic history in different eras and regions. I don't want to imitate the German, French or British model. I formulate my political doctrine in terms that go beyond any European colonial limitation.

It is therefore important to work out what it means. The European Reformation is much more complex than just the story of the monk nailing some demands on a church door. Transformative movements take a long time and they are part of a consensus that emerges over several generations. The people who lived then did not know that they were part of the Christian Reformation. Neither did those who lived through the French Revolution. You can only see these processes in retrospect.

What does this mean for the renewal of Islam?

The Muslim Reformation is a similar process. The approximately 1.6 billion Muslims live a wide range of beliefs. It's not like a car where you put the key in the ignition and then reform starts. Rather, there are numerous ideas in circulation that meet with approval or rejection. Some advocates of reform approaches have to pay for this with their lives, which unfortunately is often the case in history.

Does that mean we are in the middle of an Islamic Reformation?

Yes, we talk about it and that's why we are right in the middle of it. Because Muslims are increasingly bothered by some aspects of a traditional understanding of Islam such as a lack of women's rights or a lack of religious freedom. When I was studying at the University of Khartoum more than 40 years ago, I was drawn to democratic principles and human rights, but the understanding of Sharia law in our courses stood in the way. The fact that I felt a need for reform is part of that process. We are in the middle of a transformative process that we call the Reformation.

The interview was conducted by Claudia Mende.