Which foods can affect your serotonin levels?

Serotonin: Fortunately there is something to eat

What we eat affects ours Mood. Abundant carbohydrates and little protein seem to help us deal with stress better. Those who also eat plenty of fish are likely to suffer less from depression. 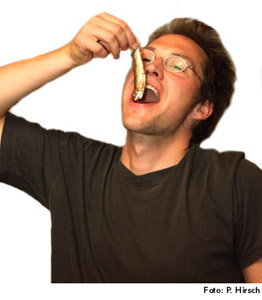 The Greek physician and philosopher Hippocrates was way ahead of his time when he claimed that what we eat determines our mind. That was a bold hypothesis at the time. Especially since the scientific methods to prove it had not yet been developed. Even the vernacular still has a lot of advice ready, for example, how to drive away misery: sour makes fun, bananas make you happy and chocolate drives away frustration. In the meantime, scientists have actually been able to document effects on mood for individual foods. But these proved to be short-term at best, although the molecular biological processes gave hope for a pronounced and long-lasting effect. For example, chocolate, bananas, dates and figs contain relatively high amounts of the amino acid tryptophan, from which serotonin is formed in the brain. And this hormone-like messenger has been shown to influence our mood.

People who suffer from depression have an average of 50 percent lower serotonin levels in their blood. Therefore, a lack of the messenger substance is associated with a sad general mood. An increased production of serotonin, on the other hand, can make you happy. That is why the substance is often referred to as the happiness hormone. Depending on which receptor the substance binds to in the brain, it has a calming effect, promotes deep sleep, lifts the mood or stimulates memory. But serotonin from food does not penetrate into the brain because it cannot cross the blood-brain barrier. Its precursor, the amino acid tryptophan, is different. In the UK and Canada, tryptophan is even approved as a mild psychotropic drug. But it seems impossible to eat so much bananas or chocolate to actually change your mood permanently. The tryptophan content in the diet is obviously too low for that.

More serenity through the menu

The effect of a single food simply seems to be too weak. On the other hand, studies are increasing that a diet that is low in protein and high in carbohydrates and rich in fish can make people happier and more balanced in the long term. The reduced protein intake should mainly be covered by fish. Anyone who feels down again and again, is highly sensitive to stress and suffers from mood swings, has demonstrably been better off with such a diet.

The Dutch psychologist Rob Markus from the University of Maastricht has been devoting himself to the question of whether a certain diet or food selection can help us deal with stress better, i.e. make us more stress-tolerant, since the late 1990s. In one of his first studies, he used a questionnaire to select 22 subjects from 334 subjects who were classified as prone to stress and a further 21 who he had classified as stress-resistant. The people received either a diet with 66 percent carbohydrates and 4 percent protein or meals with 41 percent carbohydrates and 27 percent protein. All subjects were given both the high-carbohydrate meal and the other. They each received the food on two consecutive days, and a test with maths tasks was always carried out in the afternoon. After a four-week break, the identical test was carried out again to check the repeatability of the results. All participants had to solve the arithmetic problems in the presence of a lot of noise. Among the stress-sensitive test subjects, those who were fed high in carbohydrates reacted much more relaxed. Her pulse was lower, and her saliva also contained around 15 percent lower levels of the stress hormone cortisol. The mood was also significantly better with a higher amount of carbohydrates, and the test subjects felt happier. In contrast, the test persons, who were considered insensitive to stress, showed no significant effect of diet.

As an explanation for the findings, the researchers are discussing two mechanisms today. On the one hand, food rich in carbohydrates is largely converted in the body into glucose, which in turn stimulates the pancreas to produce insulin. Insulin increases the tryptophan level in the brain, i.e. the content of the substance from which the happiness hormone serotonin is formed. That could explain why the mood of the test subjects is improving. Since serotonin in the brain is also responsible as a messenger substance for the transmission of information from nerve cell to nerve cell, overall cognitive performance increases. The increased performance and the high mood apparently cause stress-sensitive people to cope better with the stressful situation after the high-carbohydrate and low-protein diet. This is ultimately reflected in the lower level of cortisol in the saliva.

Scientists see a second mechanism in the fact that the amino acid tryptophan usually competes with other amino acids such as valine and leucine for transport to the brain. With a high insulin release, however, the competitors are increasingly pushed into the muscle tissue. Tryptophan, on the other hand, remains largely in the blood. In this way, it can now - largely rid of its colleagues - begin its journey into the brain almost unhindered.

A little protein lifts the mood

Other studies also confirm that the absorption of tryptophan into the brain is likely to be more effective with a low-protein diet. If you eat a lot of protein, on the other hand, the amino acid is even slowed down. From a protein content of more than 20 percent tryptophan is clearly disadvantaged compared to the other amino acids at the blood-brain barrier. A balanced diet with a lot of grain products, fruit and vegetables, but little cheese, meat or nuts can apparently stabilize unstable people and at the same time improve their mood. To support this, this good mood diet was tested in several studies on different groups of people. In some population groups, suicide rates even go down when the consumption of carbohydrates increases. Scientists also tested the diet against premenstrual syndrome (PMS), in which women suffer from exhaustion, listlessness, mood swings and fatigue in the days before menstruation. For the majority of women, their mood improves with an appropriate choice of food. However, a low-protein diet apparently stimulates the appetite more. Various studies report that overall more calories are then consumed and weight gain may occur.

In winter, the desire for sweets increases

Incidentally, the human body seems to instinctively sense that carbohydrates make you happy. In the autumn and winter months, it therefore demands a lot of sweets. During this low-light period, there is a lack of vitamin D due to the low level of sunlight. Vitamin D promotes the production of serotinin in the brain. The inadequate supply of vitamins therefore reduces serotonin production. Especially people who are prone to depression in the darker months of the year eat significantly more sweet, carbohydrate-rich food than in summer. However, a pure winter depression can be improved by going into daylight for at least half an hour a day or by treating with light therapy.

Depending on the cause of a depression, an adapted diet can alleviate the symptoms to a greater or lesser extent. But the transition between people who only feel down every now and then and those who suffer from severe depression is fluid. But one thing is certain among scientists: people with severe depression cannot be cured with a good mood diet. If someone feels deeply sad, listless, tired, guilty and lacking in appetite for more than two weeks or even experiences states of inner emptiness and longing for death, a doctor should definitely be consulted. To cure this major depression, the influence of a high-carbohydrate diet on the brain is too weak.

Does fish protect against depression?

A drug can therefore never replace a certain diet, at best it can bring about a slight improvement. This is at least proven by studies on severely depressed patients, which the American researcher Joseph Hibbeln from the American health authority "National Institutes of Health" has accompanied. He has been researching the influence of fish on the state of mind for years. The more fish is consumed, the less depression is observed in a country. In countries like Japan or Taiwan there are around 60 times fewer people with depression than in Germany or Canada. The suicide rates are correspondingly lower in the Asian countries.

A Finnish study with around 3,200 participants also supports the researchers' assumption that fish may protect against depression and ultimately can also alleviate it. Subjects who ate marine or freshwater fish less than once a week had a 31 percent higher risk of disease than those who ate fish more frequently. Hibbeln and other researchers suggest that the omega-3 fatty acids in fish may be responsible for the differences. Similar to some antidepressants, they can interfere with brain metabolism. Because a low blood level of omega-3 fatty acids leads to a serotonin deficiency.

This explains research results at Harvard University, which indicate a mood-enhancing effect of omega-3 fatty acids. Manic depressive patients were given either fish oil or olive oil capsules for four months. Only the fish oil was able to reduce the symptoms of the disease. Since fish also contains vitamin D and this vitamin promotes serotinin production in the brain, this could also explain the mood-enhancing effect. However, the researchers do not comment on this. In the meantime, several studies have tested whether fish oil, in particular omega-3 fatty acids, helps against depression and mental disorders. For example, in a study by Sheffield University, 70 depressed patients were given high doses of an omega-3 fatty acid. The people had not responded to common antidepressants. In more than two thirds of the cases, the condition improved and the intervals between periods of severe depression widened.

However, it is not fully understood why fish has a positive effect on the mood. Hibbling sees the cause in the fact that the human brain is partly made up of essential fatty acids such as omega-3 fatty acids. For example, they can be found in the walls of nerve cells. The metabolism of serotonin and these fatty acids also seem to be closely related. Depressed people who are serotonin deficient are also often deficient in omega-3 fatty acids. Conversely, it has been shown in pigs that the serotonin level rises when they receive plenty of omega-3 fatty acids in their feed. The exact biochemical mechanisms and interactions are still unknown.

But the happy effect of the fish may simply be due to the effect of the fat. In any case, scientists have been able to prove that free fatty acids generally compete with tryptophan to bind to the protein building block albumin in the blood. Anyone who consumes a lot of fat reserves all albumin places for the fat building blocks, the tryptophan is thus unbound and can penetrate the brain unhindered. The positive effect on the mind, however, only lasts for a few hours; then the body demands a supply of fatty things, at the same time it demands sweets in order to ensure a supply of tryptophan or serotonin in the brain. However, since daily excessive fat consumption causes other illnesses, a sugar-fat cure for depression is certainly not advisable. A Mediterranean diet with lots of carbohydrates from vegetables, fruit and whole grain products, one or two fish meals a week and not too much protein, on the other hand, helps to stay calm, happy and healthy even under stress. In particular, people who are prone to stress and who are depressed can benefit from a low-protein, high-carbohydrate diet.