What makes guitar playing so fascinating

I think there are many people with Carlos Santana like me: I'm spellbound by the energy and charisma of his music and I can't ignore it, although I know that he basically always plays the same thing. And what he plays is not an eighth wonder of the world, but it is always captivating.

So what is it that makes the native Mexican play so fascinating that he has been at the forefront of guitar music for over forty years? Here is an attempt at an approximation. 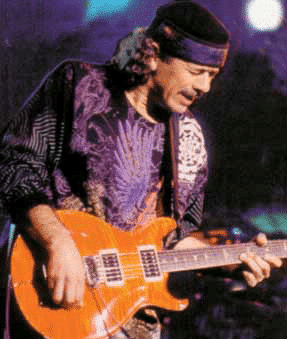 In order to understand how Carlos Santana found his style, one has to look less for his potential role models than to consult his spirituality. Uninformed or intolerant voices like to refer to him as a weirdo, but Santana has his own way of looking at life and thus on music, which has a lasting impact on him.

He was born in Mexico, where he first learned to play the violin from his father, but switched to the guitar at the age of eight. At 13, he left his hometown of Tijuana and went to San Francisco with his parents. There he earned his living in nightclubs before founding the Santana Blues Band in 1966, which later called itself just Santana and made it into the top 5 of the American album charts in 1969 with their debut album of the same name.

You can already hear from the recordings at that time that Carlos Santana is breaking new ground with his music by combining a wide variety of influences in unusual constellations - including personalities as diverse as He names the saxophonist John Coltrane or the singer Dionne Warwick as inspiration. And this is where spirituality comes into play, the core of which he has gathered from the various religions. Santana says of himself: “I love exploring as many different territories as possible. ... The most important thing is not to be afraid of new things. "

In his opinion, it is every human being's job to find a meaning in life and to fill it out as well and lively as possible. So he never stuck to one thing himself, he looked around in jazz as well as in Latin American or African music. And this is not only reflected in his guitar playing - which has bluesy features, but also lives on borrowings from countless other styles - but also in the music of his band, which is not only Latin rock, but always looks around in all directions . This can be heard impressively on his recently very successful collaboration releases, where he stood in the recording room with people as diverse as Kirk Hammett and Dido.

This unique character of Santana's music is hard-earned. Not in the sense that he had practiced a lot, but that he jammed, composed and recorded a lot and above all with different people. The list would fill pages ... And that's thanks to his openness and attitude.

The easiest way to understand Santana's game is the aspect of the sound material, because it is manageable. Even if he says that he was inspired by jazz, this is only marginally reflected in the selection of his notes, because by and large he uses the notes of a handful of scales. Mostly he takes the minor pentatonic scale, which is sometimes extended to the blues scale. It is not uncommon for him to use them to create repeating patterns. Some (often modal) pieces are based on the Doric or Aeolian scale, and especially in the last few years he seems to have discovered the harmonic minor scale for himself.

But what is more important is what Carlos Santana does with these tones: namely pure energy. Analyzing his playing technique or phrasing is quite complicated, because his playing is based on several pillars, all of which could be summarized with the term "inaccuracy". On the one hand, there is his timing, which, earlier more than now, often seems a bit sloppy. In quick passages he sometimes gets through a little and he starts to drift. 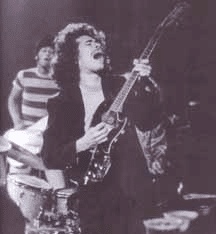 Secondly, he often uses bends, where he seldom hits the intended tone exactly, so the tones often "warp". Thirdly, there is also his very varied handling of decorations, such as grace notes, hammer-ons, pull-offs and vibrato. And last but not least, his very variable touch is striking, with which he can color his guitar tone, depending on how hard or soft he strikes, despite the strong distortion.

And then there is Santana's legendary feedback effect, with which he can make the tone of his guitar sound as long as he likes. Feedback here does not mean uncontrolled squeaking, but a targeted lengthening of the sustain through wide open amplifiers, in front of whose speakers it is positioned at a certain angle so that the string is kept vibrating and ringing by the sound pressure

Now to the point that finally makes his sound unmistakable: the equipment. The selection of his working material is very easy, but all the more effective.

After Santana was previously seen with a Gibson SG, an L-6S, a Les Paul, the Yamaha SG 3000 and other guitars, he began his collaboration with Paul Reed Smith and PRS in the 80s, who built a guitar with him, which is also available in different versions as a signature model.

This thick-necked 24-fret instrument (which is strung with .009-042 strings) and the combination of its amps are the key to its sustain-rich sound. The setting for the amplifiers is pretty clever, because Santana uses a number of different amps and boxes that he can combine using a foot switch, depending on the sound he wants. So he always uses at least three top parts (various models from Mesa / Boogie and Dumble) and three boxes (Boogie, Marshall and Brown) in alternation.

On the floor there is usually only an old Ibanez tube screamer, a mu-tron wah and an echo of boogie, all of which he rarely uses. For the acoustic pieces, Santana uses an Alverez A-Yairi CY127CE.

That's it with our entry into the guitar and musical world of Carlos Santana.

You can find playalongs and karaoke versions of Carlos Santana pieces in our playalong shop! 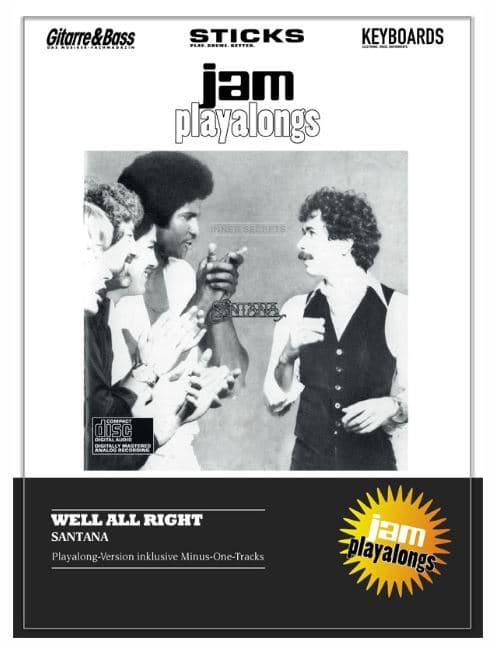