Who is the founder of modern anatomy 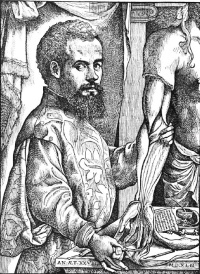 The son of an imperial personal pharmacist Charles V first completed an ancient language course in Leuven and from 1533 studied at the Medical Faculty of the University of Paris. In 1536 Vesal returned to Leuven; On December 5, 1537, the not even 23-year-old did his doctorate at the renowned University of Padua and at the same time received the professorship for surgery, which also included teaching for the subject of anatomy.
Vesal's innovative spirit was already evident in the way he taught anatomy. Usually a professor read anatomy according to traditional textbooks and was supported by a dissector and a demonstrator, which showed the textbook knowledge on the corpse. Vesal, on the other hand, dissected himself - the systematic layer-removing dissection was characteristic - and explained his corresponding findings. In 1538 he published the 'Tabulae anatomicae sex', an anatomical exhibition for teaching that was still completely in the tradition of the ancient medical authority Galen. 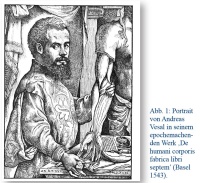 Vesal's muscle men are among the most spectacular and well-known anatomical representations and illustrate the layer-removing section.

But Vesal became increasingly aware of the contradictions between his own findings on the corpse and the doctrines of Galen, based mainly on animal sections, in the years that followed.
In 1543 he finally published his work 'De humani corporis fabrica libri septem' ('Seven books on the structure of the human body'), begun in 1539, which is one of the most famous and at the same time most beautiful books in the history of medicine. With his 'Fabrica' consisting of seven thematically structured parts, Vesal revolutionized anatomy. On the basis of his own sections, he described a large number of previously unknown structures or deepened known knowledge. Above all, however, he corrected or refuted a considerable number of Galen's anatomical "errors" that had persisted for more than a millennium. For example, Vesal rejected the notions of a multi-chambered uterus, a five-lobed liver, a two-part lower jaw or a seven-part sternum, just as he denied the existence of the so-called “rete mirabile”, i.e. a vascular network at the base of the skull. Just as remarkable as the content is the quality of the illustrations, which most likely come from the Titian student Jan Stephan van Kalkar and are among the highlights of early modern anatomical illustrations.
Although Vesal was able to build on the work of his predecessors and contemporaries, he deserved the credit of having given anatomy a new direction. Frenetically celebrated and cheered by some, he was fought and hostile by Galen's supporters.
Perhaps it was also this roller coaster that moved the then 28-year-old anatomist to change his life. In 1544 he finished his university career and became the personal physician of Emperor Charles V, whom he accompanied on trips and campaigns. In 1555 Vesal published another revised edition of the 'Fabrica', and after Charles V's abdication in 1556 he remained in the service of his son, the Spanish King Philip II, with whose court he moved to Madrid in 1559. Andreas Vesal died - under circumstances that were often discussed speculatively - in October 1564 on the way back from a pilgrimage to the island of Zakynthos in the Ionian Sea.