How are climbs in road cycling classified

Difficulty of mountains - in detail

To some, the search for objectivity and order in the realm of the many mountains may seem far-reaching and superfluous, but the attempt is nevertheless made. Since 2002, my first year on the racing bike, I have been collecting mountain data, originally to supplement the training diary, but now also for purely an end in itself, as some people were interested in it and, thanks to their cooperation, the data set is now growing faster.

The supremacy of www.Salite.ch for the classification of climbs in the whole of Europe is certainly not feasible in the medium term and neither is the goal, since the focus in the mountain list is on regional importance, that is, an attempt is made to determine the difficulty and attractiveness of To capture mountains in the Erzgebirge-Westsudeten area, which you can ride on a racing bike.

The basis for the calculation is the Fiets index used in almost all other models, which assumes a proportionality of the difficulty both to the height difference h and to the slope dh / dl.

This formula is used here in the basic units. I reject a division of the mountain into different sections and the subsequent summation of all points of the sections, because despite a long analysis I was unable to find a general connection between the perceived difficulty and the rampiness of the ascent. In addition, it is problematic that the difficulty of an ascent turns out to be greater, the more measured intervals it has (since gradient deviations are entered as a square), so the difficulty would depend in particular on the diligence of the author, which can be ruled out.

The mountains on the list are usually measured in such a way that they reach the greatest possible difficulty, so the full height meters or the full length are not necessarily recorded.

Only those increases are recorded that reach at least 5 P and are at least 5% steep, or in justified cases also those that still meet the pain thresholds: 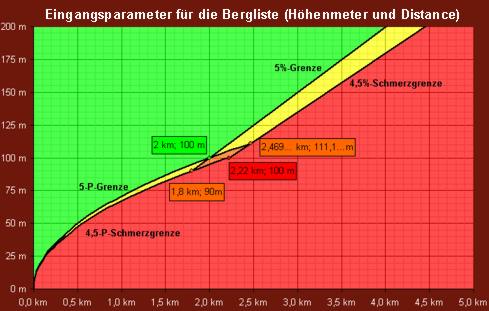 It makes sense that a 2-meter-high, vertical house wall is the hardest mountain of all, but reason dictates that such mountains should not be seen as riding on a racing bike, as they cannot be mastered even with a lot of swing.

Since you cannot deny the difference between a 1km long flat section and a 1km long depression within an ascent, a maximum of 10% vertical meters (corresponding to the depression) are added to the difference in altitude of an ascent, since a total of more vertical meters must be overcome through depressions And besides, the steeper (the more meters downhill) the depression, the less regeneration time the cyclist has through it, since he drives through it faster. The Galibier is certainly to be mentioned here as a prominent example of sinks, but the Czech classics Lysa Hora and Dlouhe Strane also benefit from the measure, and rightly so.

... [Mountains are still only those routes that have less than 10% vertical meters. Everything else is a route / tour, but it can be evaluated in the same way: simply insert the total meters in altitude and half the route into the difficulty formula, and you get an evaluation of a tour in terms of its difficulty. Here are our most difficult tours: Tour de Riesengebirge 297 P, Heimat strong 325 P, Elbspitze 88 P and to compare the ötzi with 254 P. But it is more precise to add up the individual points instead of estimating, then you get: Tour de Riesengebirge 444 P, Heimat strong 521 P, Elbspitze 188 P and again to compare the ötzi with 281 P. I see in this the not infrequently held view that one can drive quite difficult tours in the low mountain range than in the Alps. I have not yet ridden the ötzi in one go, but the fact that the Sillzer Sattel and Tiefenbachferner are left out on the loop (as well as the ascent to Axams), although they are right on the way, shows that this loop has not yet been exhausted is. An ötziStrong with the changes mentioned, which would be 265 km long but would also have almost 7900 meters of altitude, would fit very well into our low mountain range] ... (cielab.de comment)

Correctly, you have to take into account that energy is retained by the momentum when driving through a valley, so you roll through the valley and on the counter-climb again a few meters uphill. I have investigated this connection and show the results here: 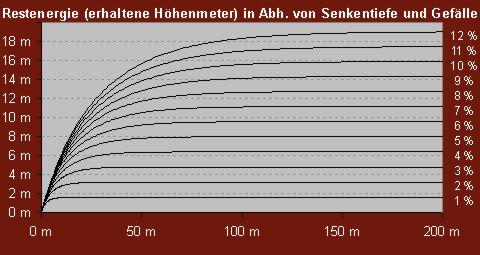 So you don't make a big mistake if you neglect the energy obtained.

Our bike computers are also a reliable basis for measuring the mountains, which is particularly important on shorter, steep climbs, as even the calibrated satellite data from the Saxon Land Surveyor's Office and the Czech Republic are no longer sufficient. As a rule, however, the last-mentioned map material is used, as it is usually sufficiently accurate (an accuracy of at most 5% or + - 2P for the difficulty can usually be guaranteed) and often simply no bike computer records are available for the climbs.

In any case, you cannot rely on data from Bikemap or GoogleEarth or other GPS analysis software, which are based on the raw SRTM altitude data, as incorrect measurements of 30 meters and more in altitude are possible here.